While he didn’t explicitly direct short sellers towards the Treasury futures market, Fed Chairman Jerome Powell did indicate in his FOMC press conference last Wednesday that he wants the Fed to be out of the QE business by mid-year 2022. That implies a rate of tapering of bond purchases by $15 to $20 billion per month from the present rate of $120 billion per month. Powell’s message helped the Treasury market clear the 1.38% resistance level on the 10-year yield, which sold off aggressively into Friday.

If he follows through on his commitment, this aggressive tapering is likely to push Treasury yields above 2% by the end of 2021, provided everything is fine with the pandemic winding down and containment of the domino effects of the Evergrande implosion in China, where many unknowns still linger. 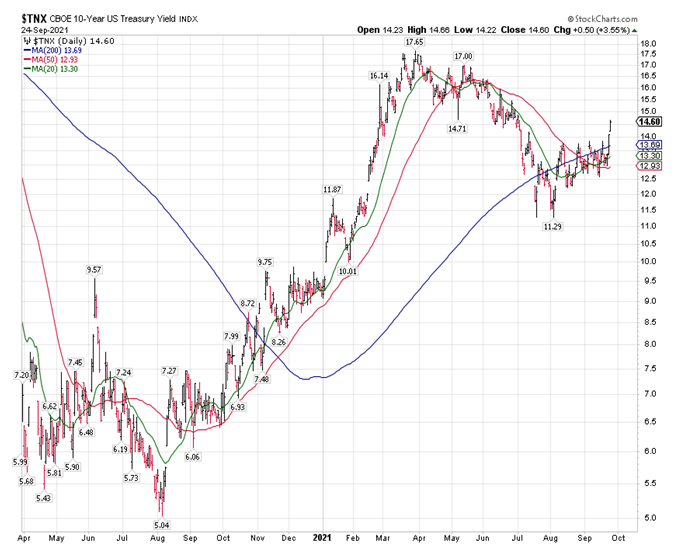 Perhaps the realization that inflation may not be as transitory as Powell had previously suggested is reflected in the FOMC desire to end QE as fast as possible in the least disruptive manner possible. Owners’ equivalent rents and other factors are likely to keep the CPI north of 3% in 2022, which may also mean a rate hiking cycle commencing next year, not as previously thought in 2023.

Since Powell will take away $120 billion in inflows of electronic dollars per month from the financial system, we should see more volatility in stocks and bonds. Mind you, he is not shrinking the Fed balance sheet like he did in 2018, but merely stopping to aggressively grow it. Be that as it may, markets should feel the missing monthly inflows from the Fed, which implies higher volatility in both stocks and bonds.

The comrades in Beijing want to rein in real estate speculation without driving prices lower, which is somewhat of an oxymoron. It is unclear what exactly they have decided to do with Evergrande, other than to say that they feel confident they can deliver an orderly unwinding of the company, where people that paid for apartments get what they paid for, but shareholders and debt holders are severely punished.

The dollar bond holders that had their interest due last week did not receive their coupon payment. There are more payments due this week on Evergrande dollar bonds. Earlier last week, there was word that Evergrande had reached an agreement with yuan-denominated bondholders on arranging to pay the coupons, which ironically does not mean that any payments were made. It simply means that the Chinese authorities are managing the situation with deliberate ambiguity.

We have not had a recession in China since 1993, and that one was not even officially acknowledged by the authorities. Capital controls and the grip over the banking system are what have allowed the Chinese to stop any economic weakening from cascading into recession for 28 years.

I personally do not believe that they have managed to reverse-engineer capitalism – to somehow find its flaws and figure out a way to avoid recessions. So far, they have managed to deliver such smooth sailing by using loan quotas and injecting new loans every time the economy has weakened.

One of these days, this forced-lending economic miracle will backfire. I am not sure if Evergrande will start a domino effect in the Chinese real estate market, but I sure think it is possible.

Sector Spotlight by Jason Bodner
Are Bears Looking a Gift Horse in the Mouth?