As I drove north to Vancouver, BC, to take a week’s vacation on a cruise to Alaska three weeks ago, it seemed like every other 18-wheeler sported a huge bumper sticker for “DRIVERS WANTED.” There is a great and growing shortage of truck drivers in North America. According to the American Trucking Association, the U.S. trucker shortage will double over the next decade as the industry needs to replace aging rig-jockeys with young men and women who (for now) resist the romance of the open road.

That’s only one profession going begging. According to the latest monthly survey by the National Federation of Independent Businesses, “A record percentage of small business owners reported having difficulties finding qualified workers in August.” Among firms “hiring or trying to hire” workers, 89% found “few or no qualified applicants for the positions they were trying to fill.” Construction workers were in shortest supply for business owners reporting hiring difficulties, followed by manufacturing.

Truck drivers, construction, manufacturing: What do these businesses have in common? Manual labor. (Manual = Latin for working with hands.) These are jobs historically dominated by strong young men, but men, women, and boys shun these jobs now. With limits on immigration, these jobs go begging. 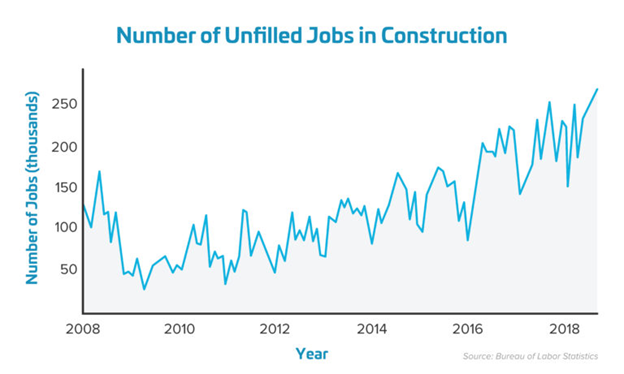 This is an amazing development, considering the fact that just before the 2016 presidential election, when economic stagnation was the order of the day, the Congressional Budget Office’s 10-year forecast predicted that the economy would add only two million net new jobs from the end of 2016 through the end of 2019 (about 55,000 per month). Due to Trump’s pro-growth agenda, however, we’ve actually gained 6.1 million new jobs in 31 months (200,000 per month) and two million in the last 12 months.

In simple terms, everybody who wants a job has a job. Those who don’t have a job don’t want to work. 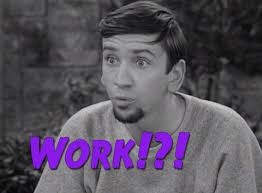 A welcome sidebar to the current data is that black unemployment has declined from 7.7% when Trump took office to an all-time low of 5.5% in the latest monthly report (for August 2019), dropping 0.5% in one month, even though the overall unemployment rate remained level. These aren’t just part-time jobs. According to the Census Bureau, the number of full-time, year-round workers increased by 2.3 million in 2018, and gains were biggest among minority female-led households with full-time year-round jobs. 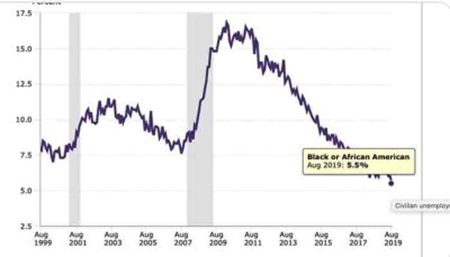 From the latest jobs report, the Bureau of Labor Statistics (BLS) said that total employment reached a record-high of nearly 157.9 million. The percentage of the population that was employed rose to 60.9 percent, the highest percentage since December 2008. With full employment, average hourly earnings are rising at a healthy rate, up 3.2% in the last year, and rising each month for the last 13 months.

The number of new jobs added each month is declining a bit this year, but only because there are so few willing workers left without a job. There is an acute worker shortage in America. We either need new immigrants to come to America, or we need the unwilling workers to “man up” and get back to work.

More Divided Than Ever? Not by a Long Shot

I was struck by an article in Friday’s Wall Street Journal that said, “America’s Political Polarization is Almost Complete.” There were charts galore, showing how we are two nations, completely polarized. If you check your Internet feed, you might believe this, since we tend to watch the cable news that we like, the newspaper that supports our belief system, the writers we agree with, and the politicians we support.

But are we more divided than ever? I beg to differ. In 1969-70, I worked in a news bureau with a huge wall map of the USA. We put a pin in every city with a race riot, anti-war riot, or a terrorist bombing. We ran out of pins and had to order more boxes. Then it got worse. In his book, “Days of Rage,” Bryan Burroughs documents more than 2,500 domestic bombings in just 18 months in 1971 and 1972. (During my vacation, I read a chilling novel about that unsettling period, Phillip Roth’s “American Pastoral.”)

But a century ago, the divide was even worse. Last week, I showed you the results of an anarchist attack on Wall Street on September 16, 1920. Such attacks were fairly common then. Bill Bryson (in “One Summer”) talks about the Anarchists that terrorized America, at least mentally, in World War I and just after. In 1917 and 1918, Congress enacted the Espionage Act and the Sedition Act, which provided severe penalties for anyone found guilty of displaying any disrespect to the American government.

Some examples: (1) A clergyman in Vermont was given a 15-year jail term for handing out half a dozen pacifist leaflets. (2) In Indiana, a jury took just two minutes to acquit a man who had shot an immigrant for speaking ill of America. (3) A filmmaker was sentenced to 12 years in prison for showing Britain in a bad light in a movie about the War of Independence, since “in this hour of national emergency,” he had “no right to subvert the purposes and destiny of the nation” in our alliance with Britain in World War I. 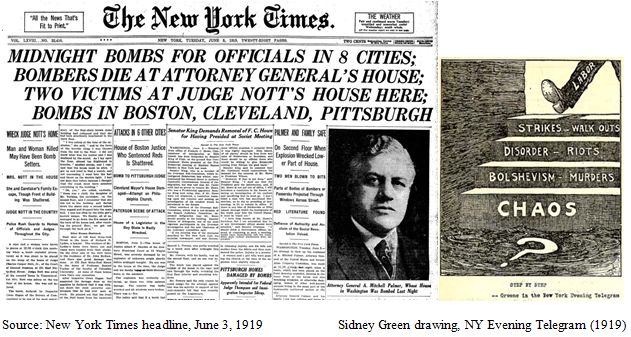 Anarchist bombs were as common in 1919-20 as 1971-72. The “Red Scare” crowd blamed immigrants, since by 1920, immigrants and their children made up almost 75% of the population in cities like New York, Chicago, Cleveland, and Boston. This was also a time of great labor unrest, strikes, and the rise of J. Edgar Hoover’s FBI. It was a time of great fear – far more fear and division than we face today.

Those who keep bemoaning today’s great political divide need to crack a history book now and then.