9.24.19: The Fallout from Iran’s Attack on Saudi Oil Facilities

There were some extraordinary developments last week. First, the U.S. informed Saudi Arabia that Iran was the staging ground for the debilitating drone attack on its Aramco facilities that ignited massive fires that disrupted 5% of the world’s daily crude oil production. In doing so, the U.S. dismissed the claims by Yemen’s Houthi militants that they had sent drones to attack Saudi Arabia’s crude oil infrastructure.

President Trump tweeted that the U.S. was “locked and loaded” – meaning that we were ready to strike at whoever was responsible for the drone attack. President Trump added that he is “waiting to hear from the Kingdom as to who they believe was the cause of this attack, and under what terms we would proceed!”

On Friday, the Trump Administration approved sending U.S. troops to Saudi Arabia to bolster air and missile defenses. This deployment apparently involves only a moderate amount of U.S. troops.  U.S. Defense Secretary Mark Esper said, “In response to the kingdom’s request, the President has approved the deployment of U.S. forces, which will be defensive in nature and primarily focused on air and missile defense.” Esper added that, “We will also work to accelerate the delivery of military equipment to the kingdom of Saudi Arabia and the UAE to enhance their ability to defend themselves.” 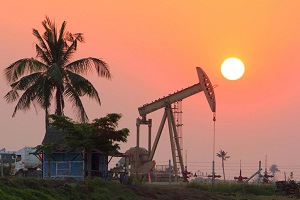 The Trump Administration has exerted tremendous economic pressure on Iran, which has been trying to secure a $15 billion international credit secured by crude oil.  European diplomats and French President Emmanuel Macron have been striving to provide Iran economic relief from U.S. sanctions in return for its full compliance with a multinational nuclear accord.  Iran’s Foreign Minister Javad Zarif has called the French proposal “productive” and Iranian officials are still continuing work on securing this international credit line.  However, Macron’s plan to reduce tensions between the U.S. and Iran is now likely dead.

The U.S.’s next step is to interfere with Iran’s ability to get credit by providing more decisive evidence of the drone attack, then getting the United Nations to condemn Iran’s actions, and continuing to isolate the ruling regime in Iran. Secretary of State Mike Pompeo tweeted, “We call on all nations to publicly and unequivocally condemn Iran’s attacks.  The United States will work with our partners and allies to ensure that energy markets remain well supplied and Iran is held accountable for its aggression.”

In the meantime, the U.S. Department of Energy said that 645 million barrels per day of crude oil from the Strategic Petroleum Reserve would be made available “to offset any disruptions to oil markets as a result of this act of aggression.” Despite this offer to help offset Saudi Arabia’s lost production, crude oil futures on Monday posted their biggest one-day surge in over a decade, but since the U.S. is the largest exporter of crude oil in the world, the U.S. trade deficit should continue to shrink, boosting U.S. GDP.

I should add that Saudi Arabia informed the other OPEC members and big producers (like Russia) that there is no need for them to boost their crude oil production, since Saudi energy officials told other cartel members that the Kingdom would mitigate its 5.7-million barrel shortage by tapping into its reserves.

Russian Energy Minister Alexander Noval said, “Right now there is a fairly large amount of reserves in the world,” adding, “There is no need to take some sort of extra urgent (measures).”  So, until production in Arabia resumes, other producers may be reaping windfall profits from the spike in crude oil prices.

The other extraordinary development last week was that the Federal Open Market Committee (FOMC) vote to cut rates by 0.25% last Wednesday was narrower than expected, by a 7 to 3 margin, illustrating the dissension within the FOMC.  Specifically, two hawks from the Cleveland and Kansas City regional banks did not want any cuts, while St. Louis Fed President James Bullard wanted a bigger (0.50%) cut.

The FOMC statement said that the Fed “would act as appropriate to sustain the expansion,” and at his press conference after the announcement, Fed Chairman Powell added that, “We took this step to keep the economy strong,” implying that there may be another key interest rate cut despite the FOMC’s dissension.

Regarding slowing global growth and trade tension escalations, Powell said, “There is a piece of this that we really can’t address,” adding in seeming frustration, “It’s an unusual situation … It’s a challenging time, I admit it.”  This last comment did not inspire confidence and prompted President Trump to tweet “No ‘guts,’ no sense, no vision!  A terrible communicator!”

Yikes!  I cringe every time President Trump tweets about Chairman Powell and the Fed.  I realize that the President is trying to force the Fed to catch up with market rates, but I worry that he will cause more dissension within the FOMC as he further undermines Chairman Powell’s leadership.

I should add that the Fed apparently lost control of short-term interest rates early last week, when short-term rates spiked briefly to 10%.  This forced the Fed to step in and conduct repurchase (repo) operations for the first time in more than a decade, in an attempt to get interest rates back within its target range.  The New York Fed conducted $75 billion of repurchases of Treasury, government agency, and mortgage-backed securities Tuesday and Wednesday, while the FOMC was meeting about cutting rates by 0.25%.

The good news is that these repo operations were oversubscribed by $8.325 billion and $5.05 billion, respectively, so the Fed decided to extend these repo operations through October 10th by selling at least $30 billion per day.  So essentially the Fed is now adding to its balance sheet and re-inflating its reserves.

The housing market news last week was very encouraging.  On Wednesday, the Commerce Department announced that housing starts surged 11.5% to 1.36 million in August, up from a revised 1.22 million in July.  This was a massive surprise since economists were anticipating only 1.26 million housing starts in August.  In fact, housing starts are now growing at the fastest pace in 12 years!

Building permits are also healthy, rising 7.6% to an annual pace of 1.42 million compared to 1.32 million in July.  Overall, it appears that lower mortgage rates have ignited the entire housing industry!