The present sideways move in precious metals looks like a consolidation in an ongoing bullish trend rather than the other dreaded congestion trading term – “distribution.” Both consolidation and distribution describe sideways moves, but the first means buying on weakness, while the latter is selling on strength.

Why does this look more like “buying on weakness”? 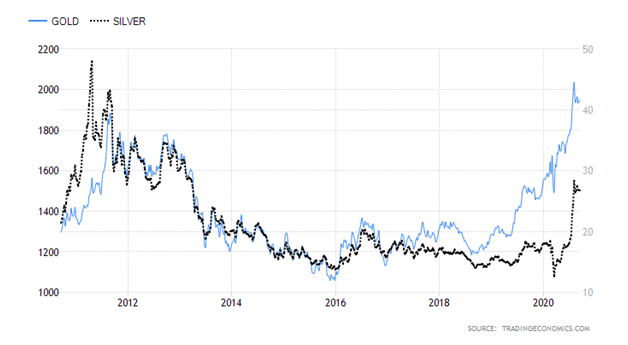 Gold bullion broke out to a new all-time high, nine years after the previous high in 2011. Real interest rates in the U.S. are now negative, while deficit spending is rampant, and the Federal Reserve has just told us that they will tolerate higher inflation for the sake of solving the unemployment picture.

It is impossible to say with precision, ahead of time, how high the inflation rate will go, but it could go a lot higher than the Fed’s target level of 2%. If there is more deficit spending and real interest rates dive deeper into negative territory, we could see a significantly higher inflation rate. We have not seen double-digit inflation in the U.S. since the early 1980s and I doubt the Fed wants to see it soar that high.

My guess is that we won’t see a serious pickup in inflation until 2022, when the slack in the economy begins to close. It’s hard to get the inflation rate much higher with double-digit unemployment, despite the generous unemployment benefits. Still, money supply growth rates are off the charts due to government guarantees, so at some point higher inflation is coming.

I do not necessarily have any targets for the price of gold and silver bullion, other than to say that the last time gold bullion took out its all-time high of $850/oz, it more than doubled that number, to over $1,900. We just took out that previous high, so could more than double it again. That could put gold bullion in the vicinity of $5,000 per ounce by the time the latest bull run is over. That puts silver bullion with a triple-digit target. It’s hard to say when that would happen, but it is likely to be in the next five to 10 years.

In the previous bull run (2001-2011) we did not have the stated goal of the central bank to create higher inflation, so this time the whole move would presumably happen faster.

The next five years surely won’t be boring in the precious metals markets.

Gold mining stocks are a different market. I have always said that investing in gold mining companies should be done only on a case by case basis. The wide variability of mining costs and mining methods means that they should not be treated as proxies for gold or silver bullion. South Africa is famous for its deep mines, very high mining costs, and political instability. When the South African rand is weak and gold is strong, these variables can turbocharge profits for local miners (pay costs in rand, sell gold in dollars), but from a longer-term perspective those companies have been a big disappointment.

Readers not comfortable with doing due diligence on individual gold miners can stick with the major gold mining ETFs. They won’t do as well as top-notch miners, but they do not carry as much risk either.

It is often said that gold miners should do better as they have operational leverage. A 10% rise in the price of gold may mean a 20% or 30% rise in the profits of a gold miner, but that assumes costs are easy to control and a stable political environment. One should not forget that a gold mining company can go out of business, while a bar of gold bullion cannot. That makes gold bullion more of an inflation hedge, while gold mining stocks are leveraged investments.