Through last Friday, the S&P 500 and NASDAQ are up 2.75% in September. The Dow is up 3.1% and is on an 8-day winning streak after an initial sinking spell on Tuesday, September 3. Last week was also a time of momentum reversal, with four formerly out-of-favor indexes up sharply in a mediocre week:

By comparison, the S&P 500 and NASDAQ gained less than 1% last week, so small caps outperformed the blue-chip S&P index and NASDAQ by over 5-to-1. Jason Zweig, writing in the Wall Street Journal’s weekend “Intelligent Investor” column, wrote, “In one of the sharpest swings in years, cheap ‘value’ stocks outperformed fast-moving ‘momentum’ shares up to 8 percentage points in a single day…”

I prefer to look at history for greater perspective. Last week, I wrote about 9-11. This week, I want to recall the re-opening of Wall Street a week after 9-11, and a similar terrorist attack almost 100 years ago.

On Monday, September 17, 2001, six days after the 9-11’s Attack on America, Wall Street re-opened to a selling panic. The DJIA fell 685 points (-7.13%), the largest daily point drop to that date, but within two months, the Dow had recovered all its losses after the worst-ever foreign attack on American soil. 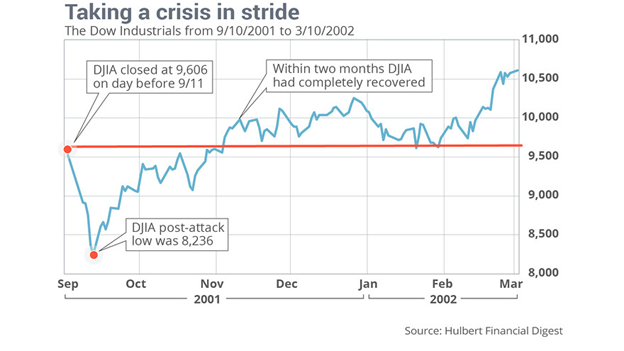 Wall Street also reopened on September 17, 1920, the day after a bomb exploded there, killing 38 and wounding hundreds. A wagon loaded with dynamite and 500 pounds of small iron weights was parked in front of 23 Wall Street, the headquarters of J.P. Morgan & Co. The bomb exploded at 12:01 pm, as many employees emerged for their lunch break. Fear of anarchists (the term for terrorists then) swept the land. 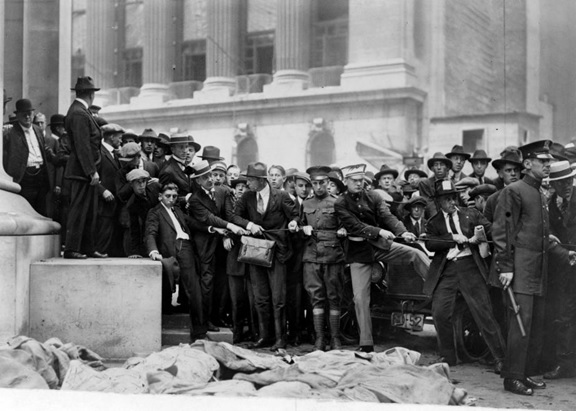 Soldiers and police restrain terrified onlookers after the bombing of Wall Street on September 16, 1920.
(Photo credit: New York World-Telegram – now stored in the Library of Congress in the public domain.)

This anarchist attack on Wall Street exacerbated what was already a long and painful 1919-21 bear market, but the anarchists couldn’t kill capitalism, as the DJIA rose nearly 6-fold from 1921 to 1929.

September 17 is also Constitution Day in America, so let us pause to honor that venerable document. We may even find a hidden investment blueprint in the “divided powers” theme within the Constitution.

“The American Constitution is, so far as I can see, the most wonderful work ever struck off by the brain and purpose of man.” – British Prime Minster William Gladstone, writing in 1878.

On September 17, 1787, the Constitution of The United States was signed by 38 of the 41 delegates present at the sweltering Constitutional Convention in Philadelphia. It was ratified nine months later.

On September 17, 1952, “I Am an American Day” and “Constitution Day” were renamed in honor of America’s immigrants, as “Citizenship Day.”  Alas, all three names have faded into history, but perhaps ‘We the People’ should take time to read or at least scan this “most wonderful work” at this time of year.

Any unbiased reading of the Constitution reveals that it prohibits most of what our federal government is doing today. When I campaigned for political office in 1997, my favorite gag line was: “The Constitution may not be perfect, but it sure beats the type of government we have now in Washington, DC.”

The role of the President was one of the most contentious elements of the Constitutional Convention. It was only decided on Day 105 of the 116-day convention. There were 30 votes on the subject of how to appoint a President, with no delegate advocating election by popular vote. In six of those votes, attendees voted unanimously for a President appointed by Congress. F.H. Buckley, author of Once & Future King (2014) said, “They did not want a president elected by the people. That question was put to them four times and they lost each time.” To this day, the president is not elected by popular vote but by electors.

The Founders sought a balance of power – or “gridlock,” in today’s terminology. They were more concerned with what our federal government must not do than what it must do. The French philosopher Montesquieu (1689-1755) influenced many of our Founders. He wrote that “When legislative power is united with executive power in a single person or in a single body of the magistracy, there is no liberty.”

Echoing Montesquieu, James Madison said, “The accumulation of all powers, legislative, executive and the judiciary, in the same hands, whether of one, a few, or many, and whether hereditary, self-appointed, or elective, may justly be pronounced the very definition of tyranny.”  When one political party or the other controls all the levers of government, the concentration of power has often come close to tyranny. 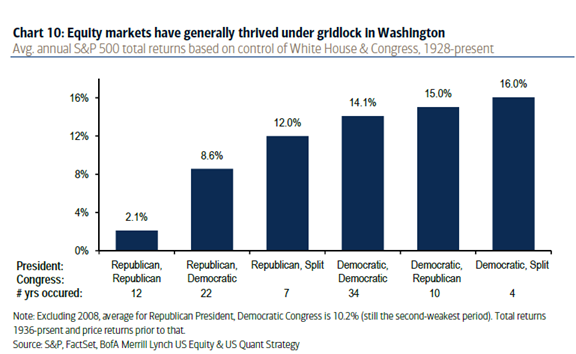