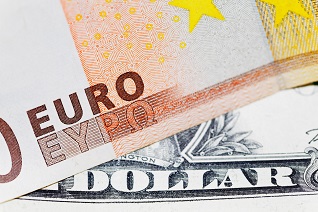 When the European Central Bank (ECB) met last Thursday, they left their bond buying program in place and left their key interest rate to member banks at a negative -0.5%. Despite this negative return on bank deposits, the euro has risen 11% to the U.S. dollar in the last six months, from $1.07 in March to $1.19 recently. As a result, concerns are rising within the ECB about a weak dollar damaging European exports.

The primary reason that the euro has gained against the U.S. dollar in recent months is that the Fed has provided far more monetary stimulus in its asset buying programs and seemingly endless quantitative easing than has the ECB. The uncertainty regarding the upcoming U.S. Presidential Election is also undermining the U.S. dollar. Fortunately, although a weak U.S. dollar tends to spark commodity inflation, it also creates windfall profits for international companies that are paid in foreign currencies.

Since approximately half of the S&P 500’s revenues are outside of the U.S. and a weaker U.S. dollar typically boosts the earnings for the multinational companies, that tends to boost U.S. blue chip stocks.

Some Inflation Signs Follow the Fall of the Dollar

Speaking of commodity price inflation, the Labor Department reported last week that its Producer Price Index (PPI) rose by 0.3% in August, one notch higher than the economists’ consensus expectation of a 0.2% increase. Service costs rose 0.5% in August and were partially responsible for the August increase. Excluding food, energy, and trade margins, the core PPI also rose 0.3% in August. In the past 12 months, the PPI declined 0.2% and core PPI rose 0.3%, so there is no evidence of serious wholesale inflation yet.

This is quite interesting, since I see many commodities rising quite spectacularly in price. In last week’s edition of GlobalMail, Ivan Martchev profiled the doubling of lumber prices. Gold is over $2,000 and silver prices have doubled in the last six months. Copper is also up over 50% in the last six months.

The answer to this dilemma is that crude oil prices dominate the price indexes and crude oil has been weak. Crude oil prices fell below $40 per barrel on Tuesday. It appears that demand will ebb further as the autumn months approach. This drop in crude oil appears to be related to normal seasonal demand as many crude oil producers are now fighting over long-term supply deals with China and other major users.

The day after the PPI report came out, the Labor Department reported that the Consumer Price Index (CPI) rose 0.4% in August (a near-5% annual rate), which was higher than the economists’ consensus expectation of a 0.3% increase. The core CPI, excluding food and energy, also rose 0.4% in August. In the past 12 months, the CPI and core CPI rose 1.3% and 1.7%, respectively, so there is some inflation brewing on the consumer level, but consumer inflation still remains below the Fed’s 2% inflation target.

In other news, the Labor Department also reported that new claims for unemployment came in at 844,000 in the latest week, down from the previous week’s 881,000 claims. Still, the financial media continues to report jobless claims as being “essentially flat,” due to confusion over the new seasonal adjustments.

Continuing unemployment claims rose slightly to 13.4 million, up from 13.25 million in the previous week, so that may explain why the financial media refer to the whole jobs situation as “flat,” but the bigger truth is that as we get closer to the election, the news media bias may become more pronounced.

Global Mail by Ivan Martchev
Get Your Flu Shots This Year