A “big” correction in the present low-volatility context is probably somewhere around 10%, or what we saw in the S&P 500 in September and October last year. We have gone without a 5% correction since then, and the selloffs after Election Day have stopped just below the S&P 500’s 50-day moving average. 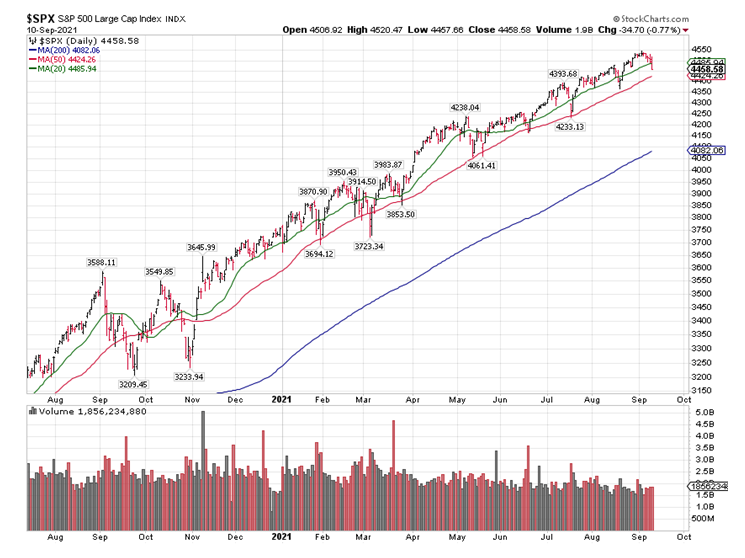 It would be foolish to expect anything more than tagging the 200-day moving average on the S&P 500, if that, given the recovering economy. Any bigger selloff below the 200-day moving average can come only if there is a major exogenous event (like an unexpected war) or a virus mutation that renders the vaccines meaningless (it’s possible), or if the Federal Reserve foolishly crashes the market via aggressive balance sheet operations, the way it did in December 2018 (that’s unlikely just before a Fed Chair re-nomination).

As things stand now, barring mutations, wars or counter-productive Fed actions, a likely target for a big correction would be the 200-day moving average on the S&P 500, which stood at 4082 at Friday’s close. By the time the S&P gets there, it will probably be around 4100, as it is presently rising. If we do make it to the vicinity of the 200-day moving average, the S&P 500 would be where it was in May of this year.

September is the only month in the calendar year with historically negative returns if you look back 50 years or more. That’s not a guarantee, as some Septembers have been great, but the long-term trend suggests that we should be on the lookout for selloffs in Septembers.

There is a situation in China that can cause the S&P 500 to decline more than 10%, as happened in the summer of 1998 during the Asian Crisis (see chart below), although that is likely a low-probability event. 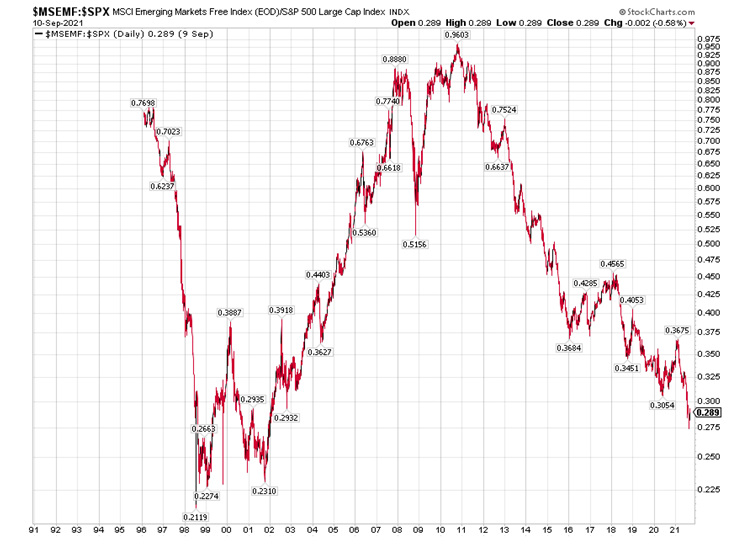 Since February 2021, when the Chinese tech crackdown kicked into high gear, the MSCI emerging markets Index has taken another leg lower relative to the S&P 500. We are approaching crisis territory on a relative basis, which is on par with what was going on in the midst of the Asian Crisis of 1997-1998.

This is why it wouldn’t be wise for the Chinese authorities to let Evergrande – the presently “teetering on the brink” large property developer – fail, as it is unknowable what kind of dominos would fall in the overleveraged Chinese financial system if it failed in the middle of all this investor skittishness. 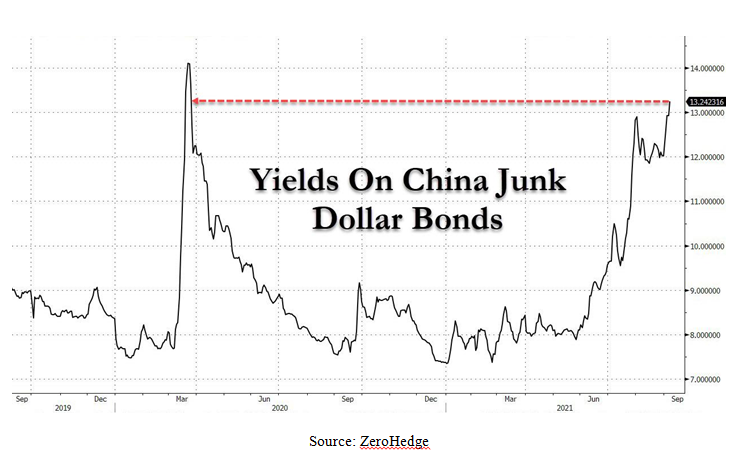 Yields on Chinese dollar-denominated junk bonds are trading at levels not seen since March 2020 in the midst of the initial global Covid crash in stocks and credit. That suggests that there is quite a bit of tension under the surface when it comes to the situation in China, which is a very different picture, not reflected in developed market stocks and bond market indexes. No doubt the Chinese tech crackdown is happening at a precarious moment for companies like Evergrande, which could tip the situation into crisis territory.

China has had many domino-like scares before – not the least of which was the spectacular crash in the Chinese stock market in 2015, but miraculously the country keeps avoiding its “Minsky Moment.” *

The main financial issue in China is that their grip on the financial system allows the CCP to nip crises in the bud by injecting more loans and liquidity into the system, which increases the leverage in the system and thereby makes that future crisis – when it comes, since it cannot be averted – that much bigger.

Since XI Jinping decided to be “President for Life,” he is likely to see what a financial crisis looks like while his own hands are on the steering wheel. I do not believe that the cyclicality of the capitalistic economic system can be engineered out of existence, which is what the Chinese appear to be trying to do.

* Investopedia defines a Minsky Moment as “the onset of a market collapse brought on by the reckless speculative activity that defines an unsustainable bullish period.” It was coined by the economist Hyman Minsky (1919-1996).

Global Mail by Ivan Martchev
This Could Be “The Big One”