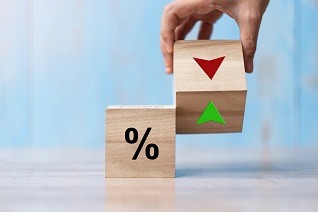 The Federal Open Market Committee (FOMC) statement on Wednesday said that the Fed “is committed to using its full range of tools to support the U.S. economy in this challenging time, thereby promoting its maximum employment and price stability goals.” The statement also said, “The coronavirus outbreak is causing tremendous human and economic hardship across the United States and around the world.”

The FOMC statement then went on to say that the Fed would maintain its key interest rates between 0% and 0.25% as well as continue to “increase its holdings of Treasury securities and agency residential and commercial mortgage-backed securities at least at the current pace to sustain smooth market functioning.”

Finally, the FOMC stated that its “Open Market Desk will continue to offer large-scale overnight and term repurchase agreement operations.” Overall, this was an incredibly dovish FOMC statement, which will likely continue to promote a weak U.S. dollar, higher stock prices, as well as higher gold prices.

In Fed Chairman Jerome Powell’s video statement and press conference, he warned that the second-quarter GDP drop would be substantial. He was right. On Thursday, the Commerce Department announced that its flash estimate for second-quarter GDP growth was a record annual decline of 32.9%, which was better than the economists’ consensus estimate of a 34.7% decline. Although the U.S. GDP decline was shocking, Europe’s decline was worse. Germany’s GDP declined at an annual pace of 34.7%, last quarter while the entire European Union’s GDP plunged an incredible –40.3% on an annual basis.

In the wake of these weak GDP reports from Europe and America, the dovish FOMC statement, and the even more dovish comments from Fed Chairman Powell, the 10-year Treasury bond hit its lowest level in the American Treasury’s 234-year history (intra-day on Friday). As I mentioned on my Thursday podcast, I remain truly shocked at how the Fed has artificially flattened the entire yield curve. There is no doubt that the coronavirus “shock” to world economies is testing central banks and unemployment safety nets. Fortunately, many economies are bouncing back impressively, thanks to aggressive central bank actions.

Interestingly, the unemployment rate in Germany has not changed much during their deep depression. It has only risen to 4.2% from 3.8% in March. Unfortunately, in the U.S., the Labor Department reported on Thursday that new claims for unemployment rose to 1.435 million in the latest week, which was better than the economists’ consensus estimate of 1.45 million, but it was the second weekly rise after jobless claims had previously declined for 15 straight weeks. Even worse, continuing unemployment claims rose by 867,000 to 17,018,000 in the latest week. As a result of this rise, the unemployment rate in July may now increase, which will be discouraging to economists as well as to those folks now looking for work.

The Economic Indicators Are Reverting to a “Mixed” Mode

From a depressing May to hope in June, we’ve now returned to a series of “mixed” economic indicators. Last week, the Commerce Department announced that durable goods orders rose 7.3% in June, which was much stronger than the economists’ consensus estimate of a 5.4% increase. The big surprise in the durable goods report was that new orders for vehicles and parts surged a whopping 85.7% in June!

Excluding nondefense capital goods and aircraft, business investment rose a healthy 3.3%, but despite these encouraging details in the durable goods report, new durable goods orders remain 15% below where they were in February, so there is still a lot of room for further improvement in the upcoming months.

On Tuesday, the Conference Board announced that its consumer confidence index plunged to 92.6 in July, down from 98.2 in June. This was a significant disappointment, since economists were estimating a reading of 94.5. The Conference Board reported large declines in California, Florida, Texas, and Michigan, due to a resurgence in coronavirus cases there. The good news is that the “present situation” component of the index rose to 94.2 in July, up from 86.7 in June. However, the “expectations” component plunged to 91.5 in July, down from 106.1 in June. Overall, based on the consumer confidence index details, there is some hope, but only if coronavirus concerns begin to ebb in the upcoming months.

I’ll close with good news. On Wednesday, the National Association of Realtors announced that pending home sales rose 16.6% in June, compared to the previous month. Economists were only expecting pending home sales to rise 12.5%, so this was a big surprise!  In the last 12 months, pending home sales have risen 6.3% as record low mortgage rates (now at just 2.95%) and a flight to the suburbs have sparked home sales. The National Association of Realtors also reported that the supply of homes for sale declined 18% to 1.57 million, so median home prices are expected to continue rising if supplies keep declining.

A Look Ahead by Louis Navellier
The Fed Pledges a Weak-Dollar, Zero-Interest Rate Policy