8-31-21: Jerome Powell Is the Frontrunner for Reappointment

I was not surprised to see that Janet Yellen has already backed Jerome Powell for a second term as Fed Chairman (see Bloomberg article, “Yellen Backs Powell Reappointment, Boosting Second-Term Odds,” August 21, 2021). Powell has been signaling his own desire to serve a second term by focusing on inclusive employment, mentioning multiple times that higher unemployment in African American and Hispanic communities is unacceptable. This surely will be supported by many progressive Democrats who otherwise might want to appoint a more liberal Fed Chair.

I think Jerome Powell met the tests of the position by handling several crises with swift action in order to contain them. Philosophically, I do not like to see such extreme intervention in financial markets to the point that it renders market signals meaningless, but I suppose he felt that he didn’t have a choice.

Ben Bernanke’s interventions were significantly more extreme than Greenspan’s, but Jerome Powell makes Ben Bernanke look quite modest with the speed and magnitude of his own intervention. This is why the 2020 shock – easily twice as bad an economic shock as 2008 – was met with half the damage in bond and stock markets, and it was much more short-lived. It is fair to say that the “Greenspan Put” was followed by an even-bigger Bernanke Put and ultimately an even-bigger Powell Put.

Last Friday, when Powell suggested that a taper of Fed asset purchases was coming in late 2021, the stock and bond markets both rallied, which indicates that the majority of investors bought his presentation.

Fallout from the Afghan Fiasco

The fall of the government in Kabul poses no immediate risk to the U.S. economy, but it sure did damage the Biden administration’s poll numbers for the hasty and disorganized withdrawal, tainted by a terrorist attack. I think both the Russians and Chinese knew what was coming from the Taliban, whose leadership had made multiple diplomatic shuttles to both Beijing and Moscow, ever since the Trump administration announced its withdrawal plan. The collapsed Afghan security forces fought even less against the Taliban compared to the way the Iraqi security Forces fought against ISIS in Mosul. If it were not for Iran-backed Shiite militias and the Kurdish Peshmerga forces, I think ISIS would have been more successful in Iraq.

I can see Russian pipelines flowing through Afghanistan towards China and Chinese investment from its Belt and Road Initiative boosting the Afghan economy. In the end, the Trump administration gave the economic benefits to supporting Afghanistan to China and Russia, which is rather unfortunate. 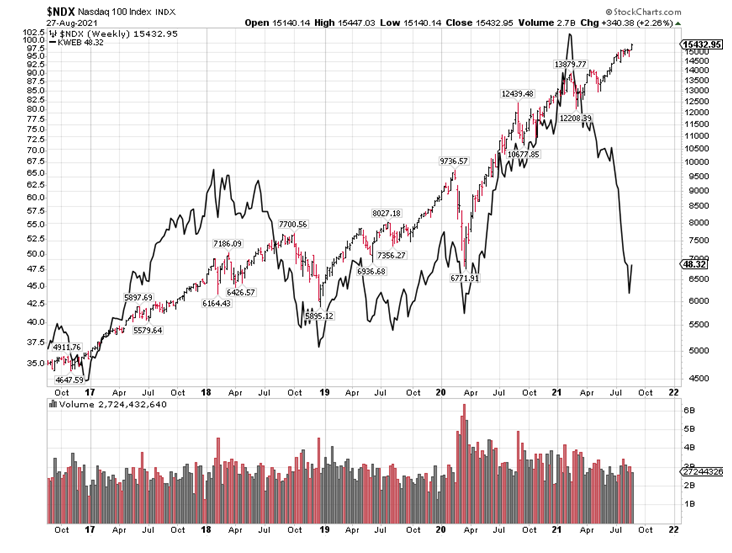 If the midterm elections were held in 2021 instead of 2022, I think Republican control of Congress and/or the Senate would have been likely, given recent developments. And if inflation does not calm down in 2022 and the Biden administration continues on its tax-and-spend agenda, the chances of losing either the Senate and/or the House would be high.

The feared crackdown on U.S. tech giants has not yet come and, given how things are going for the Biden Administration at the moment, it may not be a wise idea for that to happen before the midterm elections. Some type of increased regulation on Big Tech is likely, but nothing like what is going on in China in their fierce crackdown on the domestic tech sector.