The first Fed conference sponsored by the Kansas City district was held in 1978 and was titled, “World Agricultural Trade,” since Kansas City is situated in America’s breadbasket, with some prime farmland.

It was a pretty dull affair until 1982, when the market was just beginning to rise after Fed Chair Paul Volcker wrestled hyper-inflation to the mat by raising rates up to 20% from 1979 to 1982, so to lure their 6’7” MVP to the meeting, the Kansas City Fed decided to hold their 1982 annual meeting near a fishing spot Volcker liked in Jackson Hole – in the remote Northwestern corner of the Kansas City Fed’s district. 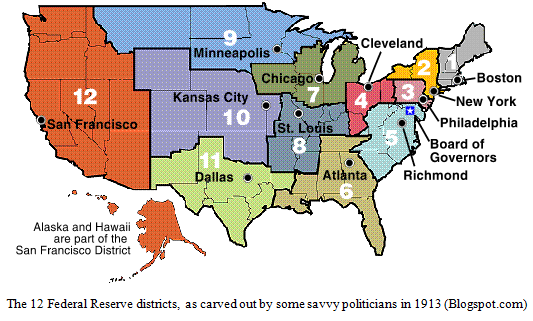 As it turns out, Missouri is headquarters for two of the Fed’s 12 districts, with my favorite District, St. Louis, holding down the eastern half of the state. They specialize in monetarist studies and historical charts with their FRED data base. The Kansas City district is more of a bucolic, farm-oriented district.

How did Missouri capture two of the 12 Fed district capitals? Elementary, my dear Wilson. When the Fed was born in 1913, the first year of Democratic President Woodrow Wilson (serving 1913-1921), the Speaker of the House was Champ Clark, a Democrat from Missouri. The Federal Reserve System was opposed by James Reed, a powerful Democratic Missouri Senator from Kansas City who served on the Senate Banking Committee, so Wilson’s Secretary of Agriculture – David F. Houston, from St. Louis, and one of the three members of the Federal Reserve Bank Organization Committee – and Clark held out the plum of a Federal Reserve District for St. Louis AND Kansas City, making Reed and Houston happy.

For the last 40 years, Paul Volcker’s fishing haven has become an annual getaway for central bankers, with some of the most beautiful scenery (above), usually causing some reflection and thought about the future of central banking, rather than some 8-minute rant about fixing the problems bankers have caused.

Be that as it may, this late August confab has become an annual rallying point for the stock market over the last 15 years, since the world fell apart in 2007-09, but this year was an exception. Usually, this pre-Labor Day meeting in the Rockies provided a boost the market needed, especially under Ben Bernanke:

Janet Yellen (and Mario Draghi) Continued to Spread the Benjamins Around

Long after Benjamin Bernanke left the scene, the Benjamins kept pouring out of the Fed. Chairperson Janet Yellen took her turn at the helm, saying, “Our goal is to help Main Street, not Wall Street,” but she turned out helping both. By keeping rates super-low, she encouraged many businesses to borrow money at low rates, often to buy back more of their shares.  Low rates also make home mortgages and vehicle loans more affordable, reviving the housing and auto markets. Low rates also put a damper on the debt service portion of the federal budget – even though low rates limit some fixed income investors.

Several rounds of Quantitative Easing (QE), seven years of ZIRP (Zero Interest Rate Policy), bolstered by Modern Monetary Theory (MMT), now popular in Washington DC, and “helicopter money” (Bernanke’s phrase) has been a bold experiment in avoiding a Greater Depression, and that sort of succeeded, but the central bankers waited too long to return to normal after 2008. Since the financial crisis of 2008, central bankers have bent over backward to be accommodating, fighting any remote chance of a 1930s rerun. 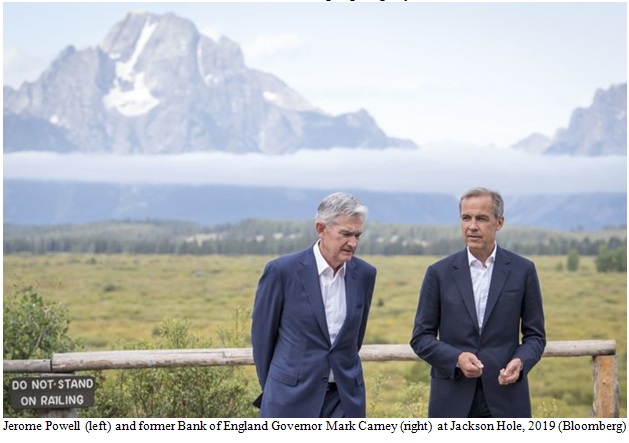 This fear of deflation has caused central bankers to fuel too much inflation for too long before belatedly fighting back, and that has put Jerome Powell in an obviously foul mood. Perhaps he is angry at himself and other central bankers – and justifiably so – but his Friday temper tantrum caused a Wall Street panic.

As I wrote last June 7 and June 14, the stock market may not bottom this year until September or early October, if history is any guide, so we may have a rocky road ahead. This does NOT mean sell stocks. I may be wrong, and it’s better to weather any market panic, or switch sectors, than to sell all stocks.

We may know more this week when August’s M-PMI is released. Economist Ed Yardeni thinks this key index could drop below 50—indicating contraction—based on what he calculates from averaging the New York and Philly business conditions results for August. That might heighten recession fears again.

Also, the full weight of Quantitative Tightening (QT), or $95 billion per month taken out of circulation from the Fed’s balance sheet, could have the opposite effect of QE, i.e., radically lower inflation by year’s end, as I predicted at the start of 2022. This could put upward pressure on bond yields, which could test the resolve of international T-bond buyers. Is the U.S. still the global capital oasis? Yes, I think it still is.

So, as we celebrate the 40th anniversary of the first Jackson Hole meeting with a mini-replay of the first one – when Paul Volcker faced down runaway inflation with monster tightening – we should remember what happened next. August 1982 was also the birth of a monster bull market, rising 15-fold in 17 years.