President Trump’s Friday morning outburst was in response to China announcing $75 billion in new tariffs on U.S. products. Furthermore, by late Friday, President Trump said that the U.S. would raise the tariff to 30% (up from 25%) on $250 billion in Chinese goods effective on October 1st (instead of in December) and to 15% (up from 10%) on another $300 billion in Chinese imported goods effective on September 1st!  I think it is safe to say that the U.S. is now “at war” with China, namely an economic war.

As I mentioned on my Friday podcast, President Trump was at a G7 meeting in France at the time, and he always seems to get in a bad mood at these G7 meetings, since he no longer gets along very well with some of these world leaders. In the process of his outburst, however, President Trump has escalated worldwide recession fears and has thereby driven down market interest rates further, so much so that the Fed may have to cut a lot more times than they planned, simply since the Fed never fights Treasury rates.

Speaking of the Fed, the minutes from their July FOMC meeting were released on Wednesday and those minutes revealed that they viewed the July key interest rate cut as a “recalibration” rather than the start of a new easing cycle. The FOMC minutes also viewed the trade spat with China as a “persistent headwind,” which signaled that the Fed would be carefully monitoring the economic news. For the time being, the FOMC minutes said that the economy continued to be “in a good place,” but the “global economic growth had been disappointing.” The minutes also implied that more rate cuts may be coming since “continued weakness in global economic growth remained a significant downside risk.”

The Trump Administration also seems very sensitive to how the stock market interprets the ongoing trade negotiations with China, which can now be characterized as an economic war. Specifically, the White House has been using economists Peter Navarro and Larry Kudlow to update the media about (1) the status of trade negotiations, (2) any impact on the U.S. economy, and (3) how the stock market is not very worried about the China trade tiff. Although the financial media has been stirring the pot on any adverse impact from the trade negotiations, the market has been resilient, until Friday. However, I suspect that the financial media and mainstream media as well will now be blowing the new economic war with China out of proportion, since President Trump seemed to “lose it” on Friday, showing that he has a real temper.

Growth is Slowing in Europe – Lowering Their Already-Negative Interest Rates 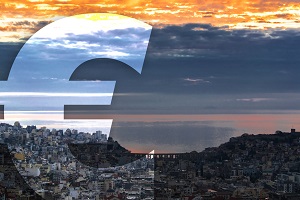 The slowing global growth rates for China and Europe continue to weaken their underlying currencies and put downward pressure on interest rates. Last week it was reported that inflation in the Eurozone in July slowed to a 1% annual pace (down from a 1.3% annual pace in June) and is now at the lowest level in over two years. With inflation retreating, the European Central Bank (ECB) now has a new excuse to conduct more quantitative easing and cut its already negative key interest rate of -0.4%.

Speaking of negative-yielding government debt, on Thursday, Germany held a 30-year government bond auction that resulted in the first-ever auction with negative bond yields. Fully 87% of the almost $17 trillion in negative yielding government debt is in Japan and Europe, which are characterized by aging demographics and a high savings rate. Bank stocks have fallen 23% in Japan and 24% in Europe in the past 12 months, since flat yield curves and negative interest rate are bad for bank operating margins.

I should add that the European Central Bank (ECB) minutes were released last week and policy makers were apparently receptive to both interest rate cuts (e.g., even more negative than -0.4%) and asset purchases (i.e., quantitative easing). The Eurozone is a mess, especially with Brexit coming October 31.

Speaking of Brexit, Prime Minister Boris Johnson was in Germany and France last week to meet with German Chancellor Angel Merkel and French President Emmanuel Macron. The primary Brexit concerns seem to be alternatives to a border between Ireland and Northern Ireland as well as a renegotiation of any EU exit fee. Although Ms. Merkel seemed flexible, Mr. Macron is not, so the odds of a “no-deal” Brexit are rising, which should boost the British pound and hurt the euro around late October or early November.