8.20.19: Looking for Phoenix Stocks from August’s Ashes to Lead the Market Forward

Few would argue against the position that when the S&P 500 hit a new all-time high in late July, it was a new high not to be trusted. Rumors of a trade deal and the prospect of a 50-basis point rate cut were somehow being thought of as having “Street cred” when both assumptions were fairy dust at best. Such a fickle market that goes up on poorly grounded momentum was bound to give way after absorbing a double-dose of disappointment after the Fed cut rates by 25 basis points and China devalued the yuan.

Two weeks later, in the bottom of the ninth inning of second-quarter earnings season, the S&P is back to trading at the same level it was on January 1, 2018. So, after nearly 20 months, index investors have made zero on their money. Collecting a 1.8% dividend yield on the S&P while enduring the wild ride of the past year-and-a-half makes passive investing feel anything but “passive.”

Now, I wouldn’t want to awaken index fund legend Jack Bogle from his long slumber. On a long-term basis, he was probably right about average investors having little chance to outperform the S&P, but a skillful money manager in the late stages of a bull run should be able to beat the S&P with a lower beta. 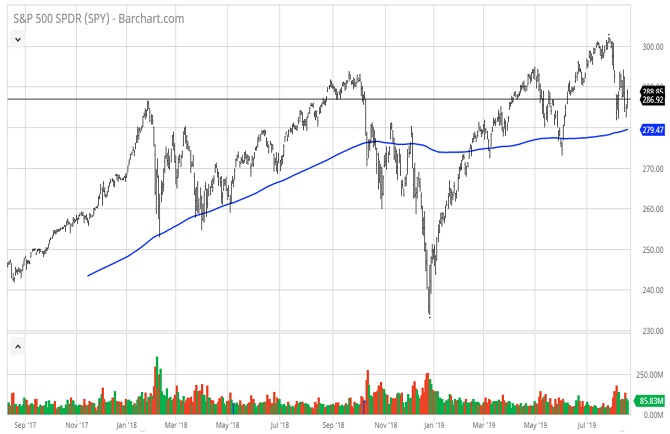 One thing I relish when the market undergoes a nasty correction – such as the past two weeks – is that after every stock has been washed, rinsed, and gone through the spin cycle, we get a clear idea of which stocks are the best to own going forward. In a sell-first, ask-questions-later market landscape, with high-frequency algorithm trading programs going nuts, it truly pays to take special note of those stocks that don’t decouple from their primary uptrends and become the new “institutional darlings.”

It’s Time for Active Managers to Show Their Stuff

After the market emerges from its current August correction, as I believe it will, the number of stocks hitting new all-time highs and outperforming the S&P 500 will be reduced. It’s only natural that the market narrows as the bull market matures. Index investors naturally put a floor under stocks that have heavy S&P 500 weightings, which makes the task increasingly difficult in a stock picker’s market.

At present, the FAANG stocks are not leading, whereas Microsoft (MSFT) and Texas Instruments (TXN) are. For the index junkies, Mr. Softie occupies the top spot in the SPDR S&P 500 ETF (SPY), followed by Apple, Amazon.com, Facebook, Berkshire Hathaway, and Alphabet holding positions #2-6, but TXN is nowhere to be found within the top 25 holdings. Instead, the upper 20% of the index is top-heavy with banks, drug, industrial, and energy stocks.

So, unless there is a resumption of accelerating growth, which isn’t the case when the Fed is preparing to slash interest rates further, the S&P 500 will likely grind sideways to slightly higher as the safe haven consumer staples, telecoms, and utilities stocks simply don’t make up enough combined weighting to counter the stalling out of many of the big names within the index.

There is also a greater move to own big cap, blue-chip stocks where P/E ratios and strong dividend growth actually factor heavily into forward capital rotation. Very few stocks will get away with having superior top line growth but no earnings or P/E to speak of. Investors will also need to keep a close eye on the S&P advance/decline line, arguably the most important stock market gauge at this stage.

The past two weeks show erratic behavior similar to last May – a market correction month like August, after which the market righted itself. My view is that the ground under the market has shifted and earnings growth tied to attractive P/E ratios will begin to matter more following the kind of shakeout investors have just endured. There will still be plenty of high-beta stocks that will trade higher, but only if they held their crucial technical support levels during the current washout. 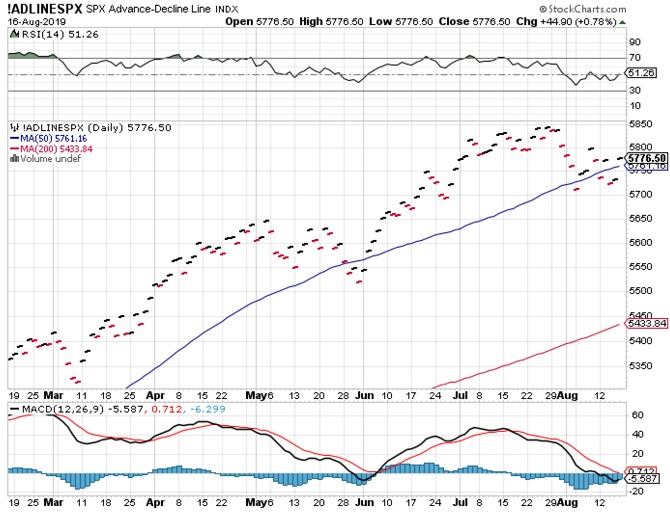 Professional money is paying super close attention to those stocks that not only exceeded second-quarter sales and earnings estimates, but also provided solid upside guidance for the third quarter and for the full year. Plus, those stocks that have the luxury of dominating their space will also maintain a strong institutional fan base in some of the hottest secular themes, such as 5G technology, the Internet of Things (IoT), artificial intelligence (AI), digital advertising, space wars, mobile e-commerce, and advanced medicine. That may sound like a lot, but the playing field of superior stocks has actually gotten smaller.