8-17-21: More Drama in the Treasury and Junk Bond Markets

The unprecedented demand for U.S. Treasuries at last week’s auction – even as the 10-year yield approached its 50-day moving average – speaks volumes. Some observers called the auction “one for the record books,” while others called it an “A plus” auction. Yields did slip notably last Friday back below 1.3% (the day after the auction), closing below their 200-day moving average. 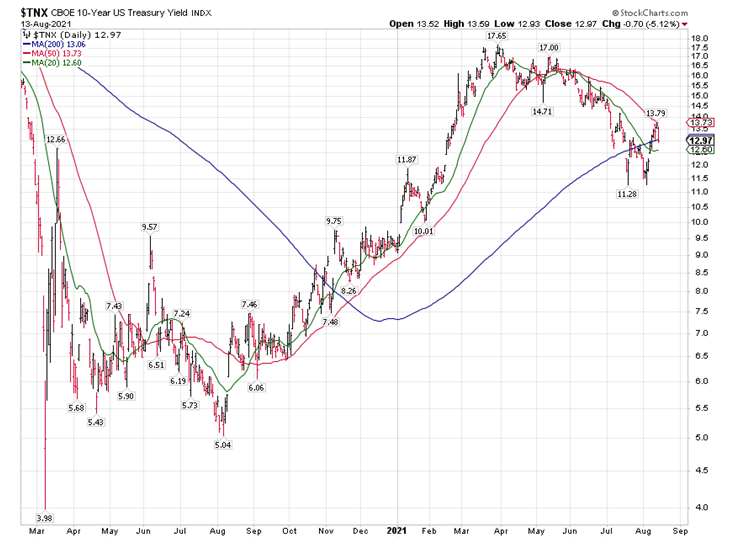 All this technical mumbo jumbo from the bond market is important since it may be sending us a message about the economy. The message of higher bond yields early last week signaled an improving economy because of COVID success as well as rising inflation due to bottlenecks and monetary policy, all part of the normalization process. The message of sharply lower bond yields seems to be the opposite of that.

The most bearish thing the bond market can do, when it comes to its relevance for the stock market and the economy, is for the 10-year to take out 1.12% and then head toward 1%, as the vast majority of investors had already assumed we were on the other side of the COVID threat. But the world is not yet sufficiently vaccinated, and I wonder if that is what the bond market is now suggesting.

The bottlenecks may continue if the Delta variant of the novel coronavirus becomes a problem globally, which means more “transitory” inflation ahead, to use Fed Chairman Powell’s term, but we could possibly see more deflation later on if we have a double-dip COVID global recession.

The message is to get more people vaccinated. Moderna turned out to be a spectacular success and the statistical data suggests that its vaccine turns out to have a little more lasting immunity than Pfizer’s, due possibly to the 3X active ingredients in a single shot, making you slightly sicker – if you were to get any reaction. On the other hand, that’s probably an acceptable price to pay for a more lasting immunity.

The Junk Bond Market is Priced for Perfection

“Inside 400” is a term bond traders use to describe the narrow spread of junk bonds to the relevant Treasuries, indicating that the spread is less than 4%, or 400 basis points (bps). We are at 334 at last count and have been as low as 302 in July – really low by historical standards. It has been lower, below 250 in the late 1990s and mid-2007, but inside 400 is what bond traders view as the sign of a good economy. 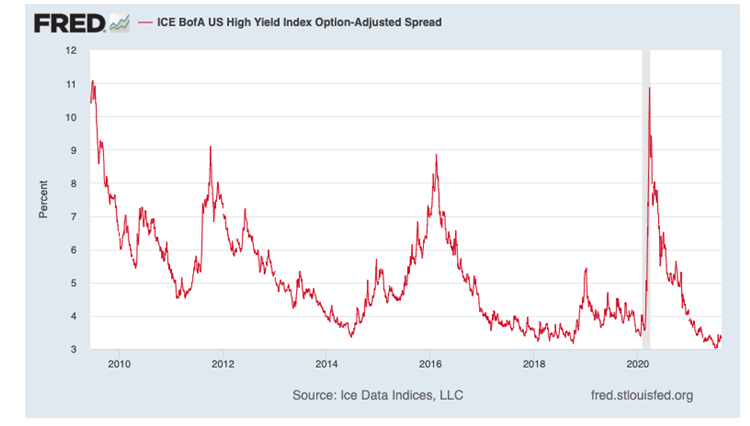 I think the strength of the economy in this case is an optical illusion created by the Fed and its extreme intervention in financial markets. “We support asset prices in order to support the economy” is how Chairman Jerome Powell often puts it, but in his gargantuan and unenviable task – to save the financial system from unravelling – he has distorted market signals to the point of making them irrelevant.

Nobody ever suggested that the job of the Fed Chairman would be easy, but we are in truly uncharted territory when it comes to Fed interventions. I am not suggesting that the U.S. economy has not improved because of rising vaccinations and reopening, but the level of its improvement cannot be observed in previously valuable market indicators as junk bond spreads. That is how the investing world has changed.

Junk bonds, for the first time, saw their yields fall below the level of inflation. That had never happened before the decision of the Federal Reserve to intervene as aggressively as it has since early 2020.

My guess is Delta will become a problem globally and will hit the stock market in some way as it delays the reopening trade and recovery, but it won’t ultimately derail it. We can’t look for clues in the junk bond market, since the Fed has rendered its signals irrelevant, at least for the time being.