We may want to hope that the present trade friction will get resolved somehow, but the fact remains that in the past three months, the situation has deteriorated notably, with new tariffs being imposed and the rhetoric from the U.S. President becoming nastier by the day. Mr. Trump is quite the rambunctious soul.

I do think The Donald has good intentions when he wants to rebalance the out-of-whack trade relationship with the Chinese, but his abrasive approach gives me pause. I am afraid it will backfire and the Sun Tzu disciple from Beijing will use his own strategies against Trump, worthy of a military maneuver described by the famous general in The Art of War. For example, China stopped buying U.S. agricultural products completely, which is very different than imposing tariffs on U.S. ag products. In my view, this is a move by the Chinese to target MAGA hat-wearing farmers as a weapon against The Donald in the next election. 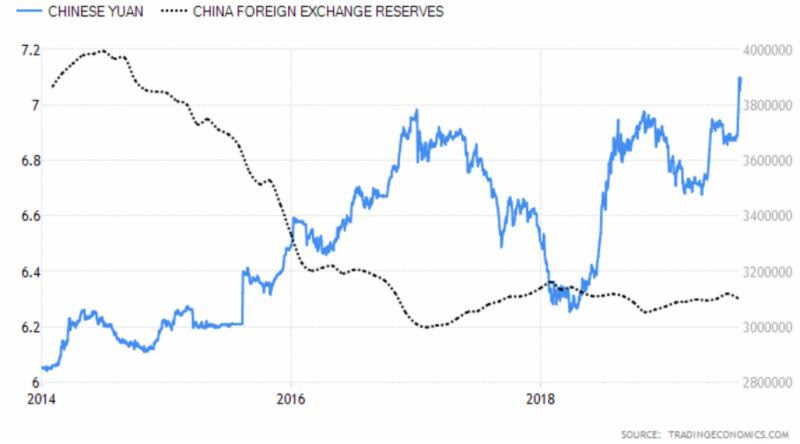 It is very hard to read the Chinese – and they surely want it that way. Furthermore, experts on China, like Russell Napier, who used to be the strategist at CLSA (formerly Credit Lyonnais Securities Asia) during the Asian Crisis, think China is a disaster waiting to happen:

“The other side of low growth in world foreign reserves is the low growth in the money supply of exchange-rate targeting regimes. These problems are particularly acute in China, with broad money growth at its lowest in the post-Mao era. The country’s debt-to-GDP ratio is rising at probably the fastest rate ever for a big economy in peacetime. This is the economy that we are told is de-gearing and reflating! It is not, and the burden of the economic adjustment enforced by the end of the growth in its foreign exchange reserves, and hence money supply, will probably be deflationary and will involve debt default. China will probably move to a flexible exchange rate, thus creating the freedom to grow and inflate away these debts. It is that exchange-rate adjustment that will destroy the current global monetary system.”
–Russell Napier, in Financial Times, January 14, 2019, “Cracks are opening in the global monetary system. Central bankers have bought growth by sacrificing financial stability.”

I agree. The interesting part is that a few years after Mr. Napier gave up his strategist title but remained as a consultant to CLSA, he left shortly after state-owned Chinese securities firm Citic bought CLSA.

Chris Wood, whom I would describe as an expert on China, took over as CLSA strategist in 2001. I have a very high opinion of Wood (who no longer works for CLSA, but U.S.-based Jeffries). Chris used to call the Chinese “comrades” in his weekly research, which is now a Jeffries research product. Comrades they are, as they run their version of state capitalism like true Communist party members. So when Chris tells the world that China is OK (see August 6, 2019 Grizzle article, “China’s Economy Still Strong Despite Trade and Tech War”) and Russell Napier says it’s a disaster waiting to happen, it’s like two experts looking at the same picture and one says, “This is definitely white,” while the other says, “It’s all black.”

I am in the Russell Napier camp. I realize that Jeffries has to do business in China and the Chinese expect flattery when doing business, but black is not white in any language. When Citic bought CLSA they did so in order to create a “Goldman Sachs for China,” but because they imposed a true comrade of a new Chairman in the face of Zhang Youjun, the top talent left and Jeffries performed the brilliant business maneuver to pick it up. One cannot run a top-rated securities firm like it is a division of the Communist Party of China, as that would destroy it, which is what appears to be happening with CLSA. Too bad, as I have probably never read better-written research, even though in the case of China we agree to disagree.

It’s very simple. This business of force-feeding credit every time the economy slows down, with lending quotas and all kinds of other tools, is resulting in rising indebtedness and a slowing economy, which is a lethal combination. The end of the Chinese credit cycle could create something similar to the Great Depression of the 1930s or the Great Recession of 2008. Which one it will be I am not yet sure, as I have not yet seen the comrades’ policy response.

Technically, both Napier and Wood are right. But in my view Napier is talking about longer-term strategy and Wood is correctly describing short-term tactics. But as the legendary Chinese general Sun-Tzu correctly pointed out in The Art of War, strategy without tactics is the slowest route to victory, while tactics without strategy is the noise before defeat.

Someone needs to send The Donald a copy of The Art of War – and pronto.