June is the official beginning of hurricane season, but June is for statistical wimps. Real hurricanes begin in August and peak in September. This chart for hurricane season also applies to stock market volatility: 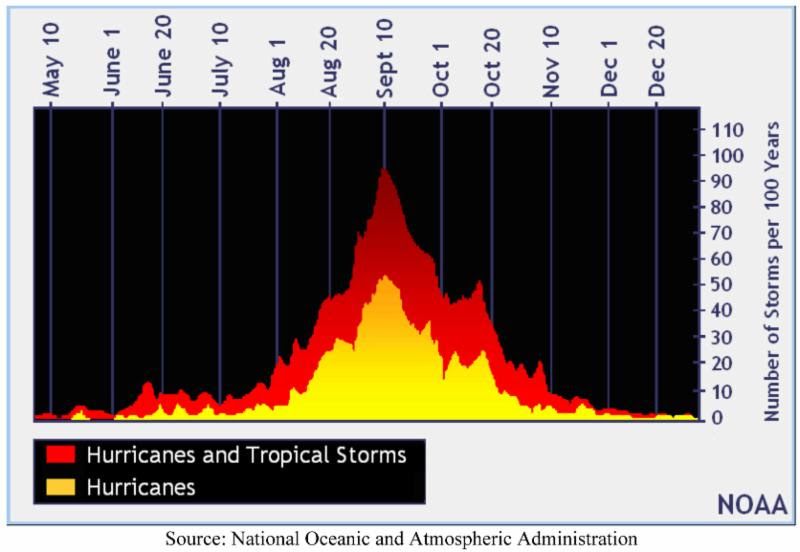 In recent years, we’ve seen greater volatility in pre-election-year Augusts, if the last three pre-election Augusts are any guide. Some pretty dramatic week-long market hurricanes struck during those months.

The first instance, in 2007, was a minor break in a five-year bull market, but it was the first sputter in the Great Recession of 2008. The real estate bubble had already popped by 2007. Home prices had already begun to decline, so their leveraged derivatives were declining faster. On August 9, 2007, the French bank BNP Paribas announced that it could not fairly value the underlying assets in three funds because of their exposure to U.S. subprime mortgages. The ECB immediately opened up nearly 100 billion euros ($130 billion) in credit and the Federal Reserve followed with $38 billion in “temporary reserves” to meet any credit crunch. The Dow dropped 5.83% in a week. On August 17, Fed Chairman Ben Bernanke decided to lower the discount rate 50 basis points to 5.75% and the market resumed rising, peaking in October. 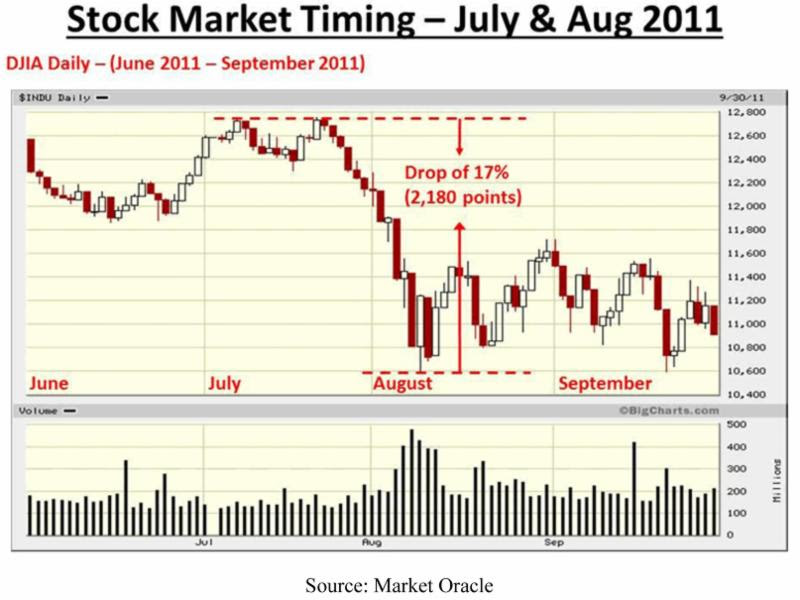 The most notable characteristic of August 2011 was daily volatility. The days alternated up and down in jarring contrast. After the market had declined 10.9% from August 8 to 12, look at what happened next:

The latest pre-election hurricane season was also a doozy, including a low-pressure system for the ages:

A Record “Low-Pressure System” Hit the Markets in August 2015

The August 2015 correction included a sudden 1,089-point drop on a computer glitch, as bids disappeared from the board in a scary opening. Here is the weekly summary, then I’ll get into the gory daily details:

On the seventh day, the Journal rested. Friday was a ho-hum day, with the Dow falling 11 points, but after a two-day 988-point rise, the only top-of-page-1 Wall Street Journal headlines on Friday, August 28 were old news, on Hurricane Katrina (2005) and the economy: “A President Stops By to Celebrate the Resilience of New Orleans” and “Economy Shows Glimmers, Strains.” A third big story covered a labor ruling. There was NOTHING about the stock market after a shockingly strong recovery. (Amazingly, the major indexes were up for the week: The Dow rose 1.1%, the S&P 500 rose 0.9%, and NASDAQ +2.6%.)

The Journal’s weekend headline was positive, but far from accurate: “Swings Don’t Shake Investors.” Unfortunately, that was not true: A huge number of investors were “shaken” that week. For the week ending August 20, the August 21 Journal reported that “global equities suffered $8.3 billion of outflows in the week ended Thursday, representing the worst week in almost four months, according to data from Bank of America Merrill Lynch.” But that was just the start. The selloff grew far worse the next week: $29.5 billion in equity funds were sold, according to Marketwatch (“Total Risk Surrender,” August 28).

The greatest volume of fund sales came on the exact day the market bottomed out, August 25: “Investors pulled more money out of stocks funds in one day during the past week – Tuesday – than they did in any day in roughly the last eight years…. Tuesday’s outflow was $19 billion….” So, the Journal’s headline would have been more accurate to read: “Investors Bail out at Market Bottom.” … as they usually do.

One big takeaway from this news: Don’t sell in the middle of a low-volume, high-volatility market panic!

Here’s what the low-pressure system of August 2015 looked like in context: 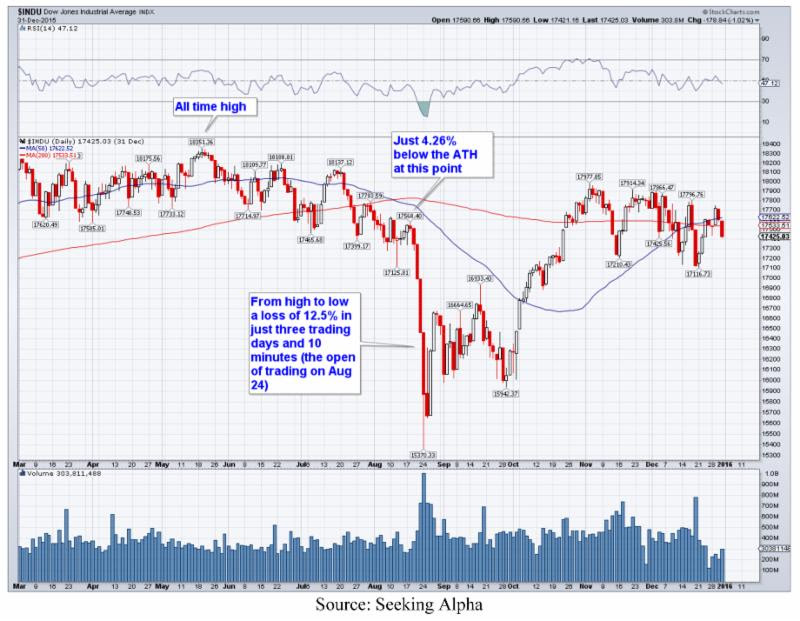 Now we come to 2019. There may be greater declines later this month, but this August began with a bang:

The stated reason for the latest decline is a threat of tariffs to be instituted on September 1, and China’s response with a currency devaluation and threatened trade retaliations, but these are all bargaining chips which could be resolved by September. We’ll have to monitor the negotiations as they groan along, but history shows that anything crazy can happen during these lazy, hazy, crazy Augusts in pre-election years.