Following the Fed’s decision to lower the Fed Funds rate by a quarter point to a range of 2.00%-2.25% and cease the sale of $50 billion per month in Treasuries (quantitative tightening), the stock market briefly regained its footing after an initial kneejerk bout of selling. It seems Fed Chair Jerome Powell didn’t put the Fed’s full support for the domestic economy in just the right language that satisfied the AI-driven algorithms that dominate short-term sudden moves in a less-than-Goldilocks choice of words.

Once everyone got a good night’s sleep, the bulls were seemingly back in business in the early going last Thursday before President Trump announced the threat of new tariffs on Chinese imports starting on September 1 if both sides can’t reach a trade deal in August. The S&P 500 quickly sold off to its 50-day moving average at 2,920 and closed the week at 2,932 in what is generally being called a healthy pullback from overbought market conditions.

American consumers and investors are well aware of the news feed that is inescapable if one has their smart phone with them. Just going into and over the weekend, Iran seized another tanker, riots in Hong Kong are intensifying, a U.S. naval blockage in Venezuela is in the works, Japan and South Korea confirmed removing each other from favored trading partner status, all maturities of German sovereign debt were sporting negative yields, and a sure-thing response from China over the tariffs is forthcoming.

And yet, the stock market held its ground going into the weekend when it could just as easily have become unglued. In fact, the final July reading for the University of Michigan Index of Consumer Sentiment checked in at 98.4, slightly above the final June reading of 98.2. The key takeaway from the report is that the economic uncertainty, geopolitical uncertainty, and trade uncertainty that have bothered the Fed have yet to bother the consumer in any noticeably adverse way.

This doesn’t mean that the bulls have clear sailing through the late summer months. No, not even close. The remaining 23% of the S&P 500 companies yet to report their second-quarter earnings are not headline names and historically they tend to lag analysts’ estimates. August is also on record as being a difficult month for logging stock market gains and now there is a countdown to September 1, when the new trade tariffs are set to go into effect, which, in my view, makes for a range-bound investing landscape at best.

But with the next FOMC meeting slated for September 18 and the new weight of fresh 10% tariffs weighing on market sentiment, it’s not surprising that the FedWatch Tool indicator now predicts a 96.2% probability of the Fed lowering the Fed Funds Rate again. On July 26, the probability was 56.2%, and with the 10-year yield knifing down to close the week at 1.86%, the bond market has already cast its vote. 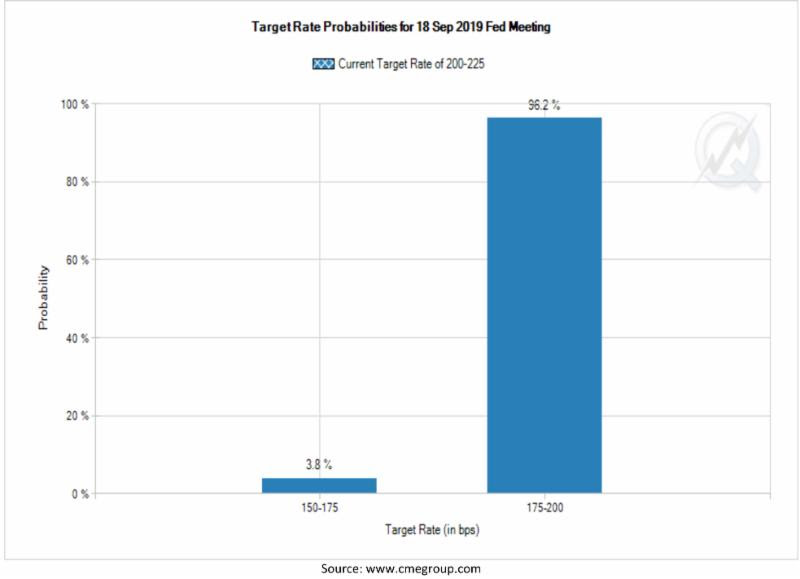 As you can see, U.S. Treasury yields are inverted well beyond the 10-year bonds now. So, if the Fed wants to get ahead of the curve and not stay behind it, they will lower rates again in September and possibly again in October or December, depending on future data and market conditions.

Since the U.S. economy represents nearly one-fourth of the entire global economy, a lot of the problems outside U.S. borders simply don’t have an emotional grip on U.S. investors when the home economy is benefiting from full employment, hence the strong read on consumer sentiment. The jobs report for July showed a healthy gain of 164,000 new hires that bodes well for extending the expansion. The jobless rate stayed at 3.7%, average hourly wages rose by 3.2% from a year ago, and the labor participation rate held steady at 63%. Factory orders rebounded by 0.6% from two straight months of declines in May and June.

WTI crude is trading at around $55 per barrel, which puts the national average price of gas at $2.72 per gallon and the Fed’s favorite inflation gauge, the PCE Index, shows inflation well below their 2% target. 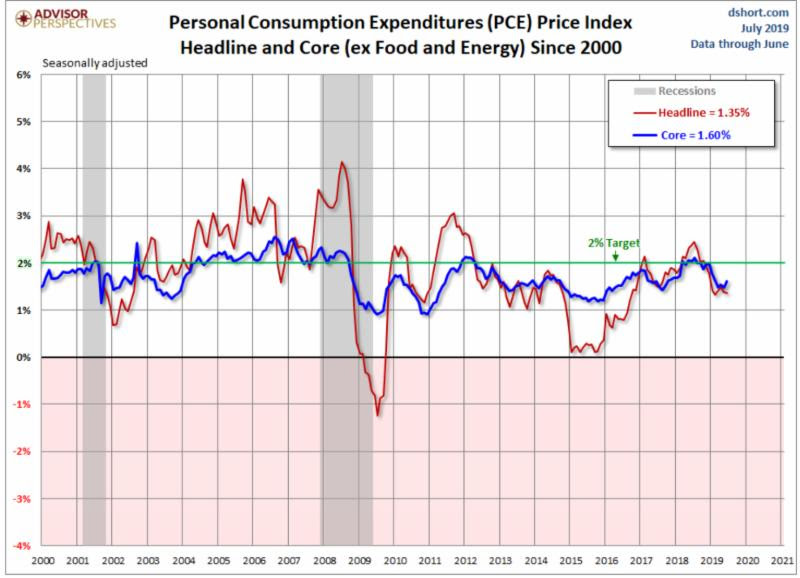 The U.S. economy continues to enjoy a high level of self-sufficiency, meaning we do not overly depend on imports. In last year’s approximately $20 trillion GDP, about $1.7 trillion were export-related and that was the highest on record, offset by roughly $2.4 trillion worth of imported goods, or about 12% of GDP.

With U.S. GDP projected to be pushing $23 trillion in 2020, slapping taxes on $528 billion of Chinese goods at a rate that will curtail three decades of lying, cheating, and stealing from the U.S. will, in the words of National Economic Council Director Larry Kudlow, have minimal effect on the U.S. economy. That’s probably a fairly accurate statement. In good time, the market will also come to that conclusion.