7.30.19: Raise Your Eyes Above the Quarterly Horizon, Please!

“…members of the S&P 500 index of big companies are forecast to say that second-quarter earnings per-share dropped by 3% compared with the prior year, the second consecutive quarter of mild decline.”
–From an editorial in The Economist, July 20, 2019, “Soaring Stock Market, Peaking Profits”

The editors of The Economist seem puzzled by the U.S. stock market’s soaring first half performance amid temporarily “peaking profits.” While admitting that “America Inc. mints $1 billion every five hours” and “firms based there account for 33 cents of every dollar made by listed companies worldwide,” they say “the underlying trend is one of stagnation.” Maybe they are just trying to sell magazines among their generally anti-American audience, but they should know that the market looks forward, not backward.

Corporate profits are only flat now because they were up 24% last year, due mostly to lower tax rates, so year-over-year comparisons are tough. It’s tempting to watch today’s parade of earnings announcements for the second quarter or mixed guidance for the current quarter and then gulp over today’s lofty prices, but it’s far more profitable to look a year or two into the future. After all, that’s what the market usually does. Remember, 2018 was a great year for earnings but a negative year for stocks. This year is the exact opposite – a great year for stocks but a negative year for earnings, so far. It all balances out in the end.

Looking out five years, analysts at the Institutional Brokers’ Estimate System (I/B/E/S) use a Thomson Reuters database to track long-term earnings growth (LTEG). Their latest consensus median five-year annualized earnings growth rate for the S&P 500 was 14.4% during the week of July 11, 2019. 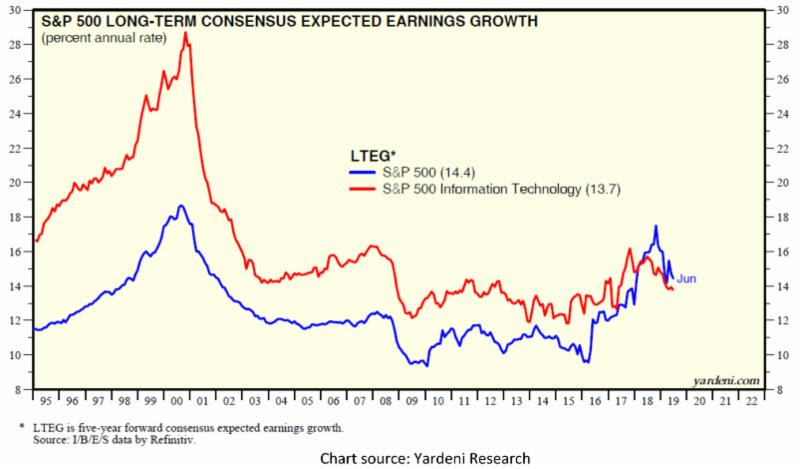 Broken down by sector, the S&P 500’s LTEG scorecard is now led strongly by Consumer Discretionary: 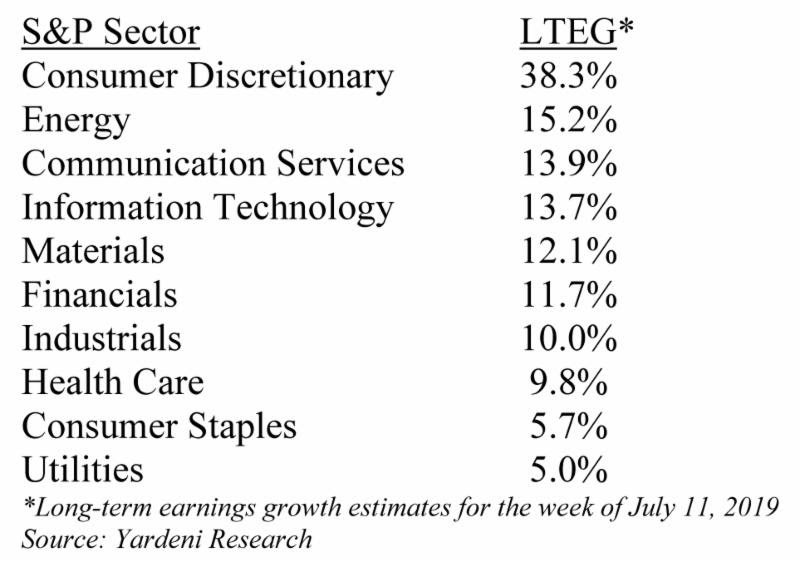 While the headlines have been warning us about a global slowdown all year, smart investors have heard all this before. (The “global slowdown” was a big story in early 2016. Must I dig out all the old headlines yet again?) Smart investors will ignore this top-down “wall of worry” story and focus on the bottom-up “slope of hope” for individual stocks and industries. That’s why smart investors are buying good stocks.

What about Those High P/E Ratios?

Put simply, a P/E multiple tells you how many years of current earnings it would take to retrieve your purchase price. But if you flip the number over to an E/P ratio and apply it to income investments, a 2% yield would take you about 35 years to double your money (using the “rule of 70” for compound yields: 70 divided by two equals 35), so today’s 2% interest rate environment delivers an “even playing field” between bonds and stocks, all things being equal, at a P/E ratio of a lofty 35-to-1, double today’s level.

This theory doesn’t always work out in practice due to the volatility of stocks and differing tax rates for stocks and bonds over time, but it is a rough way to evaluate tradeoffs between income and equity plays.

In addition, earnings tend to grow over time, while interest income has tended to shrink over the last 38 years, as bond yields have generally fallen since reaching their all-time peak at 21%+ in early 1981.

And here’s something else to keep in mind during the next election year. Who is better for earnings?

In conclusion, the U.S. remains the oasis for both positive interest rates (vs. Europe or Japan) and for equities due to our stable economic growth. The U.S. weathered the Great Recession better than other major economies. The U.S. economy has chronic trade deficits, but the flip side is that the U.S. enjoys capital surpluses and is not reliant on exports, as many Asian economies are. As a result, our capital market is the biggest in the world and routinely finances start-up companies that dominate global markets (try to name a great European startup in the last 30 years). The U.S. economy and markets are more diversified than other national economies. Another positive sign is that corporate profit margins have remained above 12% all year long, despite rising labor costs, higher tariffs, and a strong dollar. 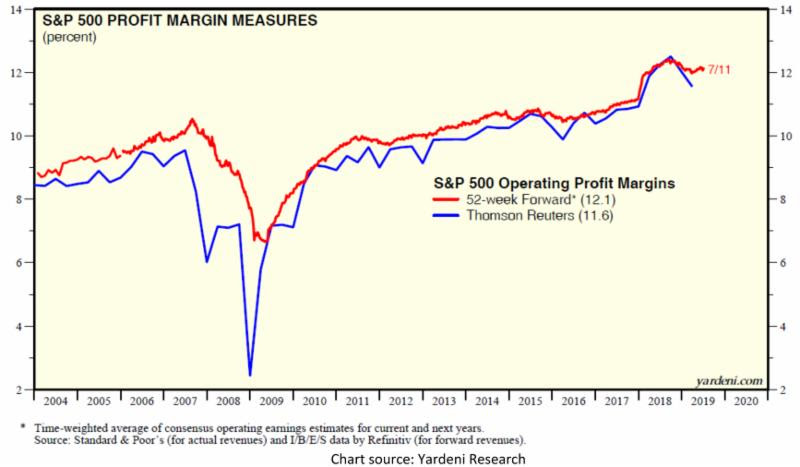 As economist Ed Yardeni wrote, “The combination of low inflation and interest rates with slow growth may result in a longer-than-usual economic expansion. The current one became the longest one on record just this month. If it keeps going, even at a slow pace, maybe it makes sense to pay relatively high P/Es.”