Since I wrote a column here on euro/dollar parity (“4-26-22: Euro/Dollar Parity is In the Cards”) 11 weeks ago, the euro has dropped more than six cents. That may not seem like a lot to the untrained eye, but at this rate, if it were to fall with the same velocity, the euro could drop another 12 cents by year’s end. Since it closed at $1.0185 Friday on the EURUSD cross, that would put it in the vicinity of 90 cents.

Is this possible or, more important, likely?

Right after the euro was introduced in 1999, it dropped to as low as 83 cents, so it has been even lower than $1. If one were to chart the blended European currencies that were folded into the euro and chart its value even further back (using the same creation formula), the euro traded as low as 64 cents in 1985. I don’t think we’re going that low, as that would mean a horrifying Paul Volcker-type era of high interest rates, which is frankly unsustainable without crashing the U.S. economy; but I think 90 cents is reasonable if Putin decided to turn off the gas supply, which would guarantee a sharp recession on the Old Continent.

The EU – and the U.S., for that matter – are placing more energy sanctions on the Russian Federation, but it looks like they are self-defeating in nature. The huge spike in the cost of energy for the European economy is not something Europe is prepared to deal with – and who is to say that the Russians won’t counter-sanction the EU? For stocks to bottom, we need to see an endgame in Ukraine, and we need both the Fed and the ECB to pivot in a dovish manner, none of which seems likely in the near future.

Last week the German DAX (stock market) Index undercut its March low and managed a feeble rebound. True, U.S. stocks have long ago traded below their March lows, but the initial DAX decline was much deeper and quite a bit more serious compared with anything we experienced in the U.S. I do not believe the DAX decline is over, given the present economic developments.

Bitcoin is Set to Attack its 2020 Lows

With bitcoin having completed a monster double top in 2021, and having already taken out its 2021 lows in 2022, the question that begs to be asked now is how low will it go? It does not help that some crypto brokers are going bankrupt, and some algorithmic stable coins are not so stable and are approaching zero. 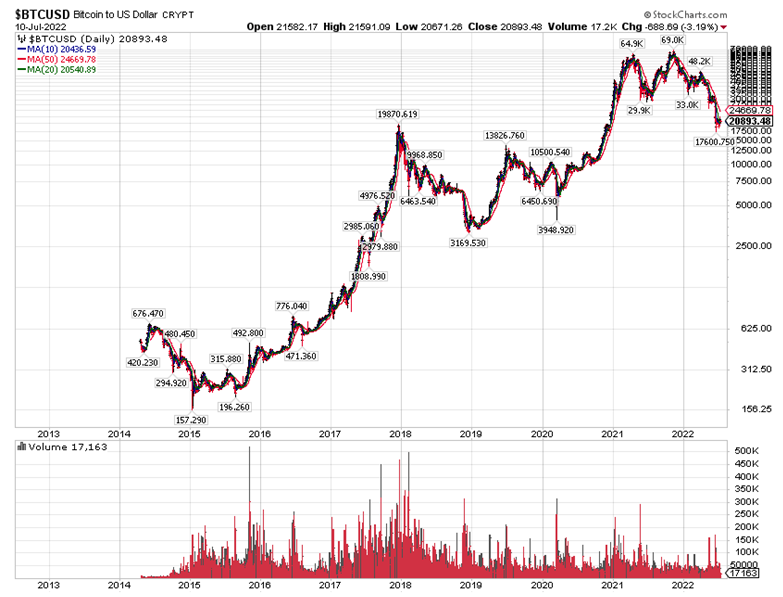 Needless to say, regulation is coming to the crypto universe, which will surely address leverage and all kinds of related problems that are plaguing Crypto World. I am not sure regulation will help in this case.

A Look Ahead by Louis Navellier
Core Inflation is Steadily Declining

Sector Spotlight by Jason Bodner
If We Enter a Recession, Will it be Mild or Extra Strength?