Ever since I became suspicious of a double top developing in bitcoin (see Marketmail, “11-23-21: Could This Be a Double Top in Bitcoin?”), the leading cryptocurrency decided to cooperate with my theory and has been under a slow motion bear market, recently trading under $20,000, down 70% in seven months.

It doesn’t look good for the bitcoin bulls, as all buyers in 2021 are now under water and are experiencing cascading losses, causing this liquidation to gain momentum. There have been many stories of holders of bitcoin (and other cryptos) not being able to withdraw their funds from certain entities, resulting in what looks like a classic “bank run.” Such withdrawal problems are adding to the selling pressure, as the “get out while you can” mentality is taking hold. I don’t blame them, as I do think that bitcoin is going lower. 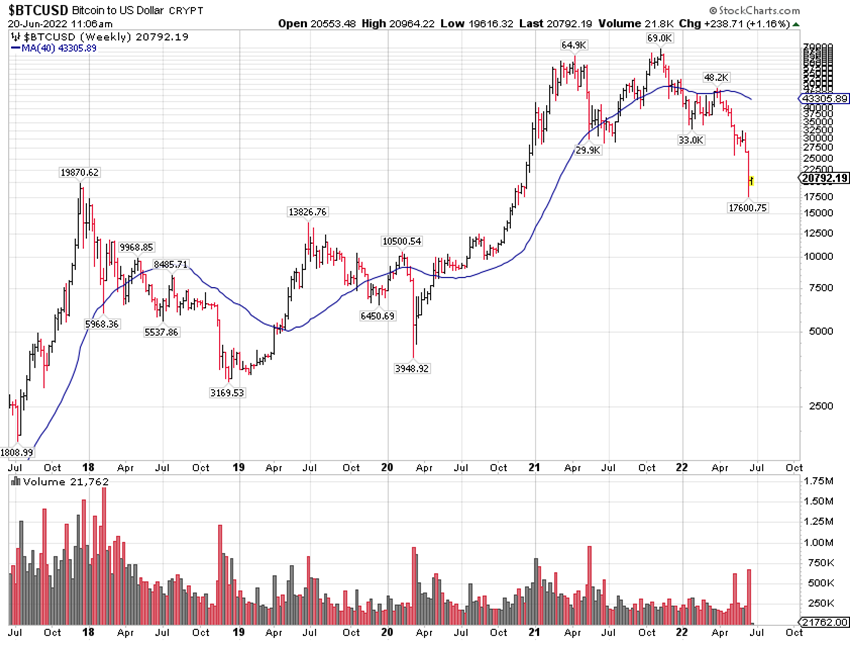 How low can bitcoin go?

I think it will break $10,000 if the Federal Reserve’s assault on high-beta assets continues. In 2022 we have now traded as low as $17,600 (a 75% loss). Mind you, the Federal Reserve has not yet started full-speed quantitative tightening to the tune of $95 billion per month. Once that starts it will get interesting. 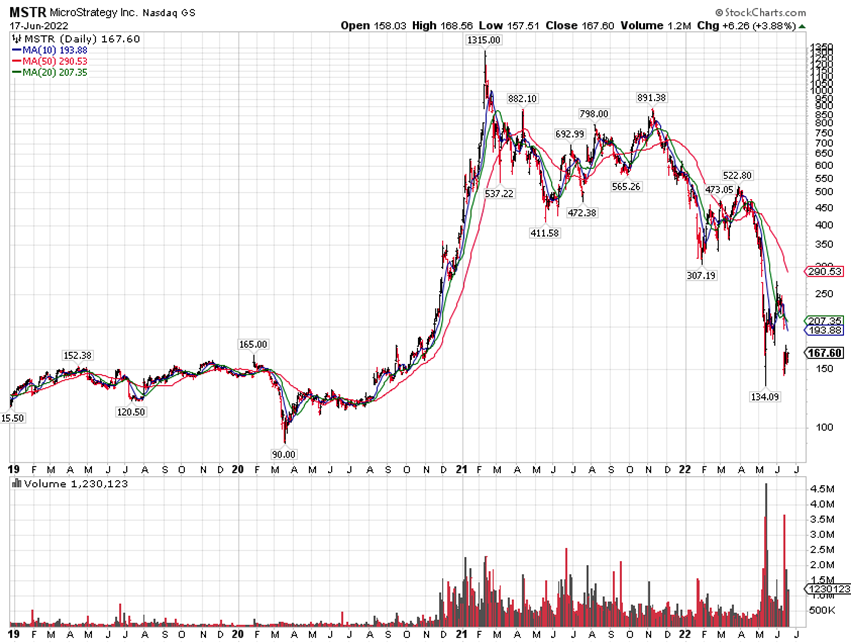 Further declines in bitcoin pose an interesting question for another bitcoin-levered entity called Microstrategy (MSTR). The problem is that this corporation issued debt to buy bitcoin and has been doing so for a while (for more details, see Marketmail “1-4-22: Microstrategy has a Bitcoin Problem”).

I saw an interview on CNBC with Michael Saylor, Microstrategy’s CEO, in which he stated that no one has ever lost money in bitcoin in a 4-year rolling time frame. That may be true for the short lifespan of bitcoin, but the debt burden this company carries may be a risky way to find out if this statistical fact will soon stop working, as I suspect it will.

The Treasury market did something last week that it had not done for 40 years. The 10-year Treasury yield rose to a hair below 3.50% on the day before the FOMC meeting opened. In doing so, it rose above its 2018 high by almost 25 basis points. Before last week, the 10-year Treasury yield had never exceeded its high from a prior tightening cycle since bond yields peaked in 1981. At the same time, disorderly trading in eurozone peripheral debt caused the ECB to call an emergency meeting.

There is no way to sugarcoat these events. This is not good.

If this indeed is a meaningful break of a 40-year downtrend in interest rates, the global economy carries way too much leverage for the break to be benign. A 40-year decline in interest rates caused the total U.S. debt-to-GDP-ratio to reach 300%. The U.S. economy is not prepared to function with high interest rates.

There is always the possibility that this was a false breakout, similar to the way the Treasury market broke that same trendline 15 years ago, in 2007, just before a serious phase of global deflation was about to start, resulting in the global financial crisis in 2008, but now the investing environment is very different.

We have a war in Ukraine, with no end in sight, which adds to global inflation. We could have another war in Taiwan that would also hold the global economy hostage through a grip on chip supply, along with deficit spending and a general pandemic-driven malfunctioning supply chain.

If inflation remains persistently high, interest rates may not behave well. In theory, because financial leverage is much higher now, it should take a lower number of interest rate hikes to slow down the U.S. economy. We are about to find the answer this summer – when theory meets practice.

A Look Ahead by Louis Navellier
Good News! Sentiment Reached a Record Low!

Sector Spotlight by Jason Bodner
What Capitulation Looks Like