Here’s the monthly track record going back the last 20 to 100 years from Bespoke Investment Group: 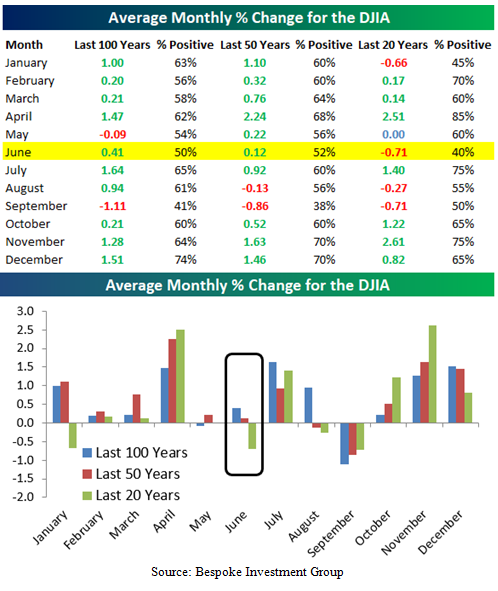 Looking forward to the summer months, the recent historical record doesn’t look much better. The five-month period from May to September looks especially dismal in the last 20 years, averaging -0.3%

This backs up the old chestnut, “Sell in May and Go Away,” which I have debunked often here. Trading by calendar rules – or any other form of market timing – tends to be a loser’s game. If you want to apply historical trends, try thinking in terms of “be more selective in summer” or (for compulsive traders) “stop watching prices every day and take a vacation.” Whatever you do, take time to look at some more details:

Surprise! June was positive in the last five years, and “Sell in May” was a losing proposition, especially last year, when the gains from May 1 through October 31 exceeded 24%. What’s going on here?!

Part of the problem with these historical “rules” is that the past is truly no guarantee of the future: If you toss “heads” 10 times in a row, the chances of tossing either heads or tails the next time is still 50%.

By the same token, June was flat or negative 12 of 15 times from 2001 to 2015, but that in no way predicted the next five Junes, which were ALL positive in the S&P 500. Forget the historical pattern.

Another part of the problem is that any measurement of markets over the past 70 years or more must use the Dow Jones Industrials since the S&P 500 was not formulated until 1957, so constructing a 100-year track record for an equivalent of the S&P is problematic, and yet the Dow is a very narrow, flawed index.

In fact, we’re approaching the centennial of the starting date of the Dow’s biggest bull market on August 24, 1921, notably after the worst global pandemic in the last two or three centuries, the worst world war to that date, a 33% Dow decline in 1920, a “flash depression” in 1920-21, the launch of Prohibition, a lame duck President (Woodrow Wilson) that was victimized by a massive stroke during his last 17 months in office, an anti-immigrant “Red Scare” that labeled most immigrants as subversive threats, the rise of the Ku Klux Klan, a rigged World Series by the Chicago “Black Sox,” and too many other social ills to count.

But when we least expected it, people ripped off their face masks and abandoned all social distancing to launch dance marathons in the ‘Roaring 20s,’ as the stock market gained nearly 500%, its best rise ever:

The Dow has some advantages and several drawbacks. Its biggest drawback is that it measures just 30 stocks, too small a sample, and unlike the S&P 500, it is not “cap-weighted” (where bigger stocks carry more weight). The Dow’s biggest stock, Apple, worth $2.1 trillion, makes up just 2.43% of the Index (even less than 3.33%, the average for each of the 30 stocks), but a Dow healthcare stock UnitedHealth Group Inc., with a market cap under $400 billion makes up 7.92% of the index, because the Dow is computed based on the stock’s price. Since the healthcare stock trades at a lofty $413 a share, its leverage within the Dow is 3.25 times more than Apple, at $127 a share, even though Apple has 17 times more shares and 5.4 more market cap.

Still, we won’t be sending the Dow out to pasture – any more than we’ll exchange Celsius for Fahrenheit or start talking meters instead of feet and inches. Old habits are hard to break. The general public likes the big, round Dow numbers and the drama of a 1,000-point drop rather than an equivalent 120-point drop in the S&P 500. But the professional world will continue watching and citing the S&P more than the Dow.

Growth Mail by Gary Alexander
Don’t Sell in May (or in June, Either)