6-2-21: Bonds and Inflation Hold the Key to the Stock Market

I think the two biggest factors influencing stocks now are Treasury yields and inflation – two factors that are intimately intertwined. Inflation is a current problem, since it’s easier to shut down an economy than reopen it, and redirecting supply chains is creating bottlenecks and shortages, resulting in price spikes. 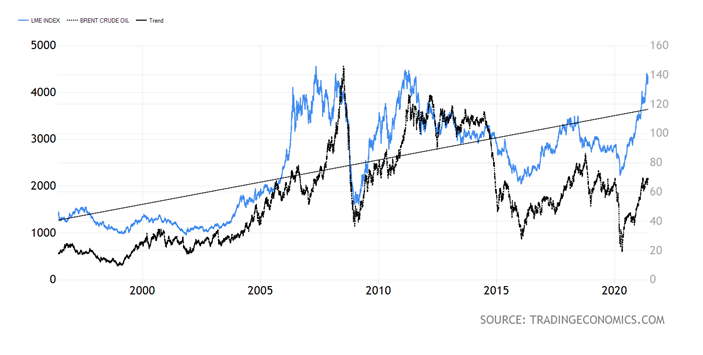 Also, there was heavy deficit spending during the pandemic, which fuels inflation more than anything the Federal Reserve does, as it injects money out of thin air directly into the economy on a massive scale. And now, the Biden Administration seems hell-bent to keep fueling more deficit spending, so if inflation does not turn out to be “transitory,” then fiscal policy will be a major culprit.

I was all for deficit spending in the middle of the pandemic, because (in my opinion) it prevented a Second Great Depression due to the record levels of borrowing in the U.S. financial system. Without it, debts could have stopped being serviced by both businesses and consumers due to economic shutdowns. However, I am not on board with many of the initiatives of the Biden Administration. There are labor shortages, and they are still offering COVID-like unemployment benefits with record job openings!

I think ultimately the powers-that-be, both monetary and fiscal, want to see higher inflation in order to “inflate away” the COVID debts, which were issued with record low coupon interest rates. That’s what the authorities did with World War II debts, and that’s what they seem intent on doing now. They may choose fancy words like “yield curve control” or “transitory” inflation, but in the end the ultimate goal is to get rid of those debts via higher inflation, not only in the U.S., but in the whole developed world.

If neither inflation nor interest rates calm down over the summer, I think the stock market will react negatively. Taking out the high of 1.77% (on the 10-year Treasury yield) would be one red flag and crossing 2% and staying above that level would be another warning flag.

COVID is on a Steady Decline in the U.S.

COVID, as terrible as it is, is on a steady decline in the U.S. New Jersey Governor Phil Murphy removed the mask mandate and I was able to go fully vaccinated into my favorite Brazilian supermarket without a mask, which was quite a welcome relief. Other mask-less people were cracking mask jokes.

I think people will be dining out more this summer, celebrating the end of COVID. It would be tragic that some will die for fear of taking the Moderna or Pfizer vaccines, which use very similar methodology and have remarkably similar efficacy. I was told by a Moderna-vaccinated neurologist that the pain from the vaccine is not the intramuscular needle in the arm, but the vaccine reacting with your immune system.

Since Pfizer and Moderna did not talk to each other during vaccine development, they individually had to determine what amount would work in a trial. Moderna guessed the higher dose. Moderna has three times the active ingredient in a single dose than does Pfizer, and theoretically that could be lowered after new trials. So now if you would get somewhat of an adverse reaction from Pfizer, in theory it could be bigger from a Moderna dose, even though in the above-referenced medical doctor’s opinion both vaccines were spectacularly good, and the dosing should not be a consideration.

That also raises the question of whether we will need boosters later in the year. As immunity tends to decline over time, do we need Moderna boosters if we originally got the Moderna vaccine? I would think yes, as my reaction was pretty mild (other than the pain), so I would know what to expect in wintertime. 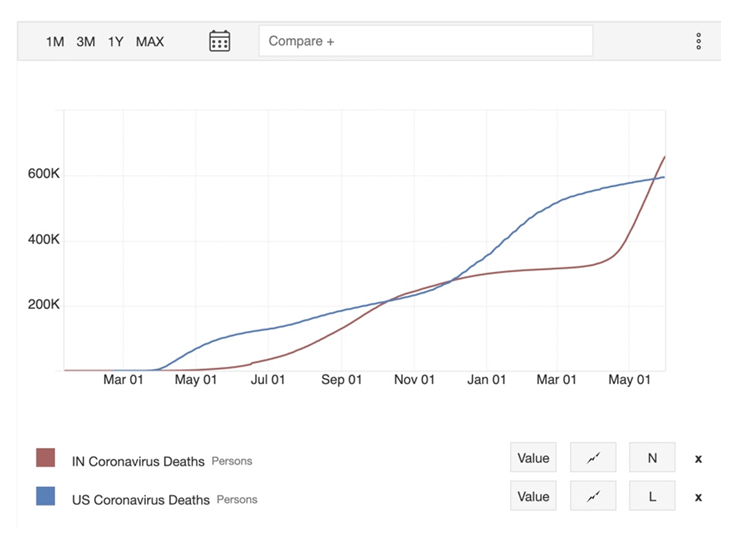 Unfortunately, COVID is not on a decline globally with India hurting badly. India’s deaths are now estimated at over 600,000. I think the world should mobilize to give India and other countries in trouble all the help they can muster, other than breaking vaccine patents, as it would create an exceptionally poor precedent: Who would then want to make a vaccine at breakneck pace in the next pandemic?

Growth Mail by Gary Alexander
Don’t Sell in May (or in June, Either)