I don’t know of one futures trader who doesn’t know how to read a chart. The best traders all know the fundamental backdrop and all the data, too; but they still trade based on time-tested principles of support and resistance, moving averages, and the like. Right now, in the seasonally strong late spring period for oil consumption, many countries are putting sanctions on Russia because of the Ukraine crisis. I am worried that some of these sanctions will backfire, and the price of oil will go parabolic, affecting more than the sanctioning countries, since oil is fungible and the most vital global commodity. (Natural gas is neither). 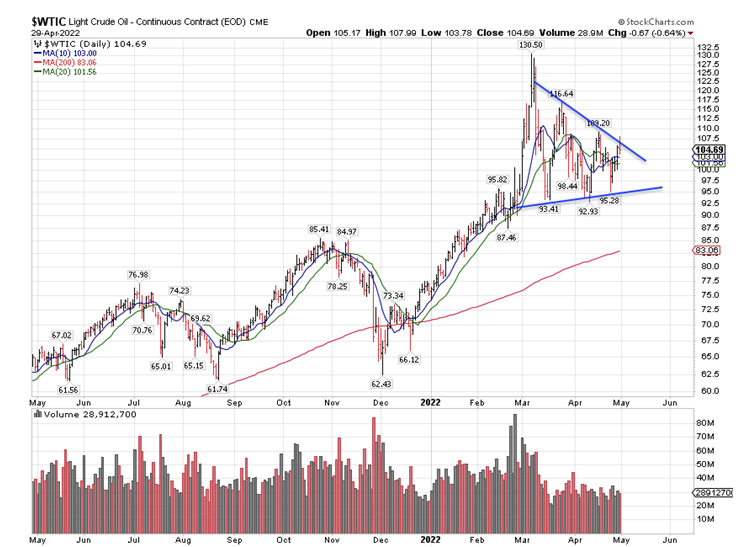 What the front-month futures contract shows is that oil is in a volatility squeeze. It looks like a coiled spring with rising lows and lower highs. Such volatility squeezes typically resolve themselves in the direction of the prevailing trend, which is currently up.

Backfiring sanctions are the most obvious trigger, as the Ukraine war is not going well for the Russians, given that they had to alter their strategy when a quick victory became unattainable. As we end the 10th week of that conflict, it is impossible to say how long it will last. My guess is that neither side will back down and the longer the conflict lasts the bigger the risk for the global economy and energy prices. 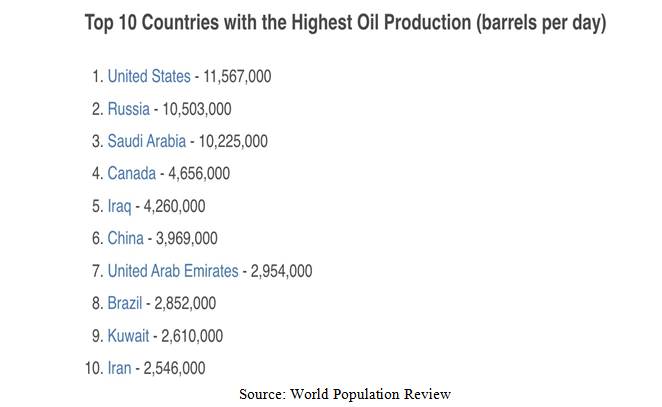 I notice that no one is talking about sanctions on Russian natural gas, as there simply isn’t any substitute for it in the European Union. The shut-off of supplies to Bulgaria and Poland last week followed the refusal of those two governments to pay for gas in Russian rubles. It appears to be some type of a test of how Russia will react, since there are much bigger consumers of Russian natural gas that pay in euros at Gazprombank, which converts the euros to rubles in the domestic Russian market and in turn pays Gazprom. This is a way for Russia to prop up the ruble, which they are doing a good job of – given that the ruble appreciated at one point in April to levels higher than where it was trading before the war began.

Both the Bulgarian and Polish governments can get natural gas from their neighbors, which will still be Russian, but the difference is that they would have to pay an intermediary in addition to what the intermediary pays Gazprom for the gas. Their refusal to pay in rubles seems not very well thought out, or it may be intentional, just to see how Russia would react.

I don’t think the EU has any choice but to follow the new payment mechanism; otherwise, they would be risking a recession due to much higher natural gas prices, which have been having historic spikes in 2022.

In the past 40 years, the highs reached by the 10-year Treasury yield in any previous Fed tightening cycle have always been lower than the prior cycle’s high. The high in 2018 was 3.25%, and the high (so far) in 2022 has been 2.95%., meaning we’re just 30 basis points away from setting a new precedent.

The more time that Treasury yields spend above 3.25% (if they get there), the more likely it would be that the trend of declining long-term interest rates would be over. I doubt very seriously that the Fed can hike seven times in 2022, as many have suggested, without breaking something in the financial system.

We should get more details on the latest Fed policies at this week’s FOMC meeting (May 3-4), which is expected to result in a 0.50% rate hike, with the Fed’s statement coming under close scrutiny.

Global Mail by Ivan Martchev
Oil is in a Volatility Squeeze