Below is the bitcoin chart that I included in last week’s Global Mail.

I write those missives on Sunday, but it takes 36 hours or so before they reach readers.

As I said last week, “head and shoulders” is a bearish sign. The inventor of this famous head-and-shoulders topping pattern couldn’t have timed it better. Technical trading patterns have been used for centuries, first as tools for commodity futures, but since we have this “digital asset” called bitcoin, they sure do continue to work.

Now, here is a bitcoin chart taken exactly one week later, with data through Sunday, May 23.

The reason technical signals work is that they try to replicate the impact of supply and demand. A price going down reflects selling pressure, while a price going up means more people (or money) is buying than selling. These patterns repeat time and again in bonds, stocks, currencies, and commodities. The different asset classes have their own peculiarities and trade very differently, but they follow the same patterns.

Some people only care about the technicalities, but I am not one of them. I need to know what is going on behind those charts. In this latest case, China is cracking down on bitcoins – again!

China hit the bitcoin and other crypto markets twice in the last week, according to this report:

Some traders like to say that “news breaks with the cycles,” meaning that what was about to happen was going to happen anyway in the asset under discussion – the market just reacted to the news as either an excuse or a catalyst – but if the Chinese root out bitcoin from China, where two thirds of bitcoins are now mined, it will not be a vote of confidence for this digital asset. Being impossible to transact in bitcoin in the soon-to-be largest economy in the world will certainly make it less attractive and may pressure bitcoin prices quite a bit further, compared to where they settled last week.

This “head and shoulders” top has a target of around $25,000, but I think it can fall quite a bit further than that as air leaves this epic bubble. No government in their right mind will let bitcoin make its financial system obsolete and if it legislates this crypto madness away, so be it. The Chinese sure seem intent on doing so. When other governments follow, bitcoin can revert to its intrinsic price, which is actually zero.

Over the centuries, there have been many crackdowns and governmental raids on gold bullion, including debasement of gold coins, yet the Midas metal is still here. Like bitcoin, gold has no cash flow, and it costs money to mine. But unlike bitcoin, gold has 5,000 years’ worth of history in its favor.

Also, since we are discussing the technicals of both, there is no massive “head and shoulders” top in gold bullion but there is a completed consolidation in a very healthy rally that got going in earnest in 2018. 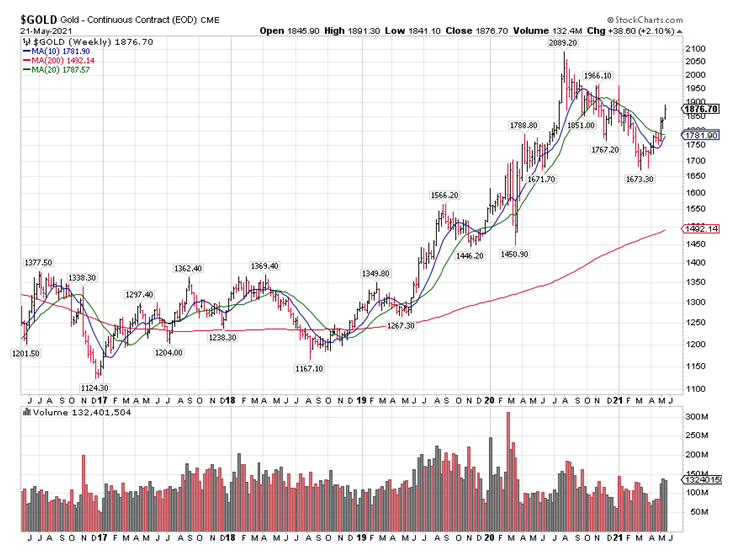 I think a hypothetical short bitcoin/long gold bullion pair trade would produce superior returns over the summer as I am not convinced that either bitcoin has bottomed, or gold has reached its intermediate-term return potential. Since the volatility in bitcoin is surreal, as is the case in any deflating bubble, I won’t participate in this madness, and I only discuss it here hypothetically, for the sake of comparative value.

Growth Mail by Gary Alexander
Some D.C. Economists are in Denial