Having come within 5 basis points of its 2018 high of 3.25%, the 10-year Treasury bond is still within the confines of the bull market that started in 1981. Never in any tightening cycle by the Fed in the past 40 years have 10-year Treasury yields exceeded the high from the prior tightening cycle. We came close in May but then declined rather sharply to close at 2.79% last week. In other words, this could be it for the recent spike in Treasury yields. We won’t know for sure for a few months, but it is possible that Treasury yields are headed down, if inflation calms down and the economy slows, which the Fed wants to happen.

One indication that inflation may calm down is the rather precipitous decline in M2 money supply growth, which has fallen from 27.5% year-over-year (YoY) growth in February 2021 to 8.6% in April 2022. In fact, if one were to annualize the three-month rate of change, M2 growth is a negative 3%. (Annualizing the trend of broad money growth over three months and extrapolating it over a year may not be the wisest form of analysis, but my point is that the pandemic surge of stimulus money is now over). 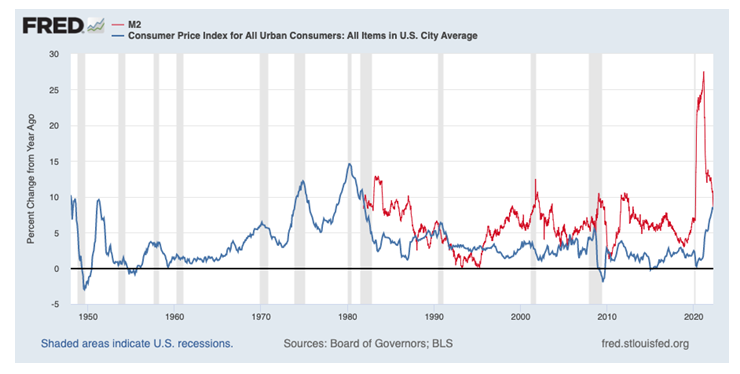 Generally, it is said that the financial system controls money supply growth while the Fed affects it with its policies, but not this time. In the pandemic, federal loan guarantees in coordination with the Fed directly affected money supply growth – as seen in the sharp spike in M2 (the red line) above.

Relative to the size of the U.S. economy, the federal government spent as much money on COVID in two years as they did on World War II. Anyone looking at the surge in inflation during and after World War II would have known that we would have an inflation problem in 2021 and 2022. Inflation shows up with a lag. If you create the money in 2020, price inflation accelerates a year or two later.

COVID spending by the Trump administration caused President Biden’s inflation, even though those 2020 federal programs were largely bipartisan. Some things the Biden administration did were no help, like extending unemployment benefits in 2021 to the point where employers could not find workers, and throwing nearly $2 trillion into a recovering economy in March 2021 with the American Rescue Plan.

I expect inflation to moderate for the rest of 2022, especially if the war in Ukraine does not escalate over the summer, but not enough so that inflation will not be a major issue in the mid-term elections.

A Rebound in the Stock Market Still Likely

I have been looking for a rebound in the stock market for the past two weeks, but it has not come. They say that a broken clock is right twice a day. We have not made any major downside progress, but the past two weeks have been marginally down, slightly undercutting the lows of the prior week in most indexes. 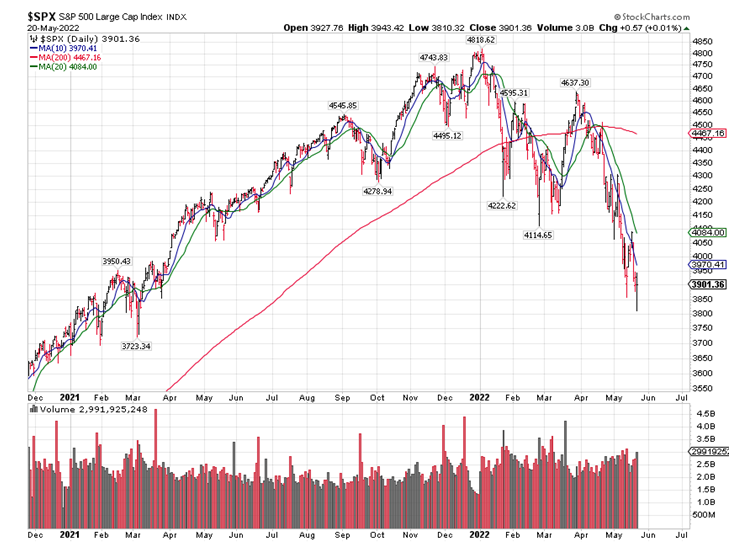 From a purely statistical perspective, the stock market has made too large of a standard deviation move in one direction, and I feel it is time for some mean reversion. In other words, we are too far away from the 200-day moving average on the S&P 500, which right now stands at 4,467. With bonds better-behaved and the Fed less hawkish and more predictable, 4,450 would be my upper target for any coming rebound.

Growth Mail by Gary Alexander
Will This Be Another Memorial Day Market to Remember?

Sector Spotlight by Jason Bodner
What Happened to Risk Assets in 2022?