Having seen these topping formations many times over the last 20 years, bitcoin’s chart looks like a head-and-shoulders top formation. No, I do not believe bitcoin is “digital gold,” which will go to the moon because of Fed money printing. I actually think bitcoin is rather dangerous because of its difficult-to-quantify regulatory risk. Last week, for instance, the ransomware bandits that shut down the Colonial Pipeline asked for payment in bitcoin. If bitcoin is used to facilitate such quasi-terrorist activities, what is keeping the U.S. government and other world governments from going after bitcoin with regulations?

I do not believe that anyone in a position of power will let bitcoin replace the U.S. banking system without a challenge, and if legislating it into oblivion is the only way to go, they would do it.

In other words, bitcoin is in a very dangerous situation. Many individual investors have been lured in by recent 10-fold gains over the past year, and when the floodgates open and the selling starts, we may experience a dramatic decline similar to the 80%-90% declines it saw many times on its way to $65,000.

Bitcoin spent the year 2021 forming a monster top. There have been many other times when the top looked like it was in, yet bitcoin came back. One of these days, the top will be real, especially if and when bitcoin is legislated into oblivion. I think we may be getting close to that time.

Peter Thiel made headlines last month by suggesting that China wants bitcoin to grow in popularity so that it can challenge the U.S. dollar as a reserve currency (see April 7, 2021 Marketwatch, “China may be using bitcoin as ‘financial weapon’ against U.S., says Peter Thiel”). I think he makes many valid points, yet I find it rather peculiar that the Chinese government cracked down on bitcoin in China and forced the largest bitcoin exchange to leave China, although two thirds of global bitcoin mining is done in China.

We’ll Find Out This Week if Nasdaq Has More Downside

Trading felt very mechanical last Thursday and Friday as buy programs pushed the major averages higher into options expiration. Every Friday is option expiration with weekly options, and I have noticed that the closing day tends to see countertrend moves. If we have been down for a few days before Friday, we tend to rally on that day. Or, if we are down sharply in the morning, we tend to rally into Friday afternoons. Those are not hard and fast rules, just some anecdotal evidence from the trenches. Needless to say, Fridays tend to be weirder for trading because computers are a bigger part of the trading environment. 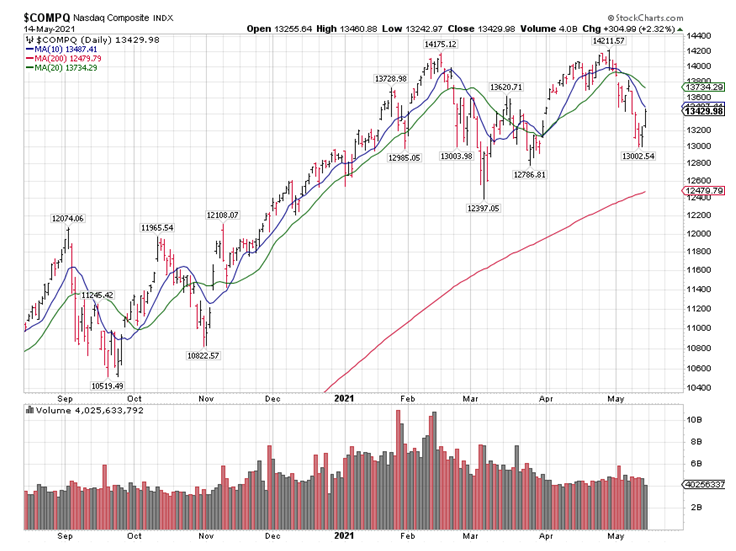 In a strong downtrend, an index tends to find resistance at its 10-day moving average, which we reached Friday. Trading above the 10-DMA a few days this week would indicate the downtrend is not as strong.

Personally, I think this is an intermediate-term correction, and we will finally see a tag of the 200-day moving average on the Nasdaq Composite in this decline. This is driven by rising inflation and rising long-term interest rates and is fairly normal. Stocks should have a positive finish to the year because the pandemic is winding down and the normalizing of the economy is underway, but overall volatility should also be high because of rising inflation and rising long-term interest rates.

A Look Ahead by Louis Navellier
The Inflation Bubble is Finally Visible – To the Fed!

Global Mail by Ivan Martchev
It Looks Like Bitcoin Wants to Test $20,000