4-5-22: The Boomerang Effect of Sanctions on Russia Is Still Unknown

A lot can happen between the time I write this (on Sunday) and when it finally hits readers inboxes on Tuesday morning, as world events these days comprise a rapidly evolving situation.

There were indications over the weekend that the Russians are weaponizing natural gas deliveries to Europe in a tit-for-tat retaliation for economic sanctions for the war. If they turn the gas completely off, I am not sure what the economic impact on the Old Continent will be.

My guess is that an abrupt shut-off is unlikely, but some type of squeeze on Europe is coming, as the recent decree signed by Vladimir Putin to pay for Russian gas in rubles for unfriendly countries suggests.

One puzzling development has been the amazing recovery of the Russian ruble, which last week traded at levels near 76 on the USDRUB rate – stronger than before the war started! I don’t know a single person who could have possibly called this monstrous ruble rally from 130 to the 80s on the USDRUB rate in a mere two weeks. It was easy to see the ruble sell-off based on the severe sanctions and parallels with Crimea in 2014, but it was nearly impossible to see the fierce appreciation in the past two weeks.

Perhaps the reason for the ruble rally is that the Russian central bank is experimenting with a gold standard, setting a fixed price for gold bullion at 5,000 rubles per gram (for the domestic market), which causes interesting dynamics for the currency. The exchange rate of 5,000/gram is actually about $52 per gram, which compares with the market value of $68 per gram at the time of the announcement.

The present price of gold in grams is $62 (as of this writing), so the ruble has weakened a tiny bit. There still is likely to be a large spread between the ruble fixing for gold for the domestic Russian market and the value of gold bullion on global markets, as there is no capacity for arbitrage between the two prices. 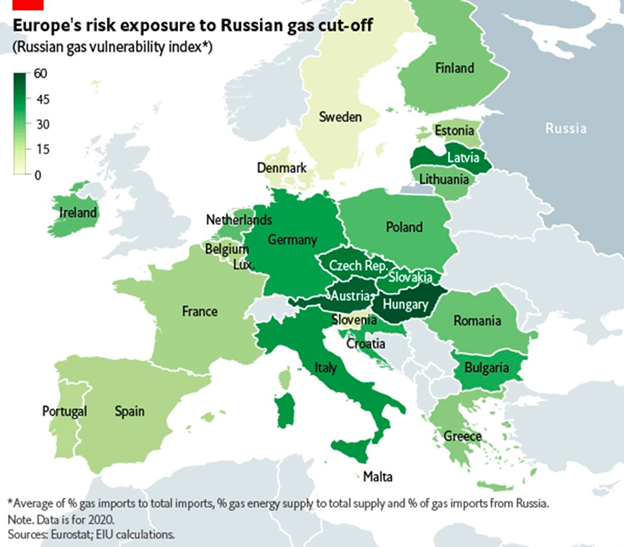 What about the euro? The EU surely has more to lose from backfiring Russian sanctions than anyone else, given its rather large trade relationship with the Russian Federation and its dependence on Russian natural gas and oil. We don’t know how much the Russians would decrease supply, but suffice it to say that there isn’t enough natural gas capacity to make up the difference, so if Putin wanted to cause the same type of economic hardship on the EU that EU sanctions have caused the Russian Federation, he can simply turn off the gas. Will he? That is the billion-dollar question. A recession in the EU because of Russian gas delivery disruptions implies much lower levels for the euro, plausibly below parity with the U.S. dollar.

Gold Bullion Has Further to Run

If indeed the boomerang effect of Russian sanctions has not fully played out, the Russians are about to throttle down the flow of natural gas to Europe while the ruble is convertible to gold for a period (and for the domestic market only). That means we have likely not seen the highs in this present rally in gold. 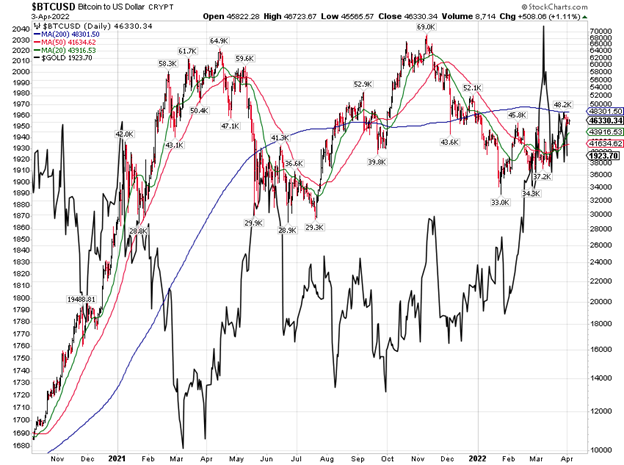 This also may mean we have not seen the lows for bitcoin. I do not believe those two are equal. Bitcoin has a high correlation to high-beta assets like the Nasdaq 100 Index. If Nasdaq takes another leg lower with accelerating quantitative tightening and 50 bp rate hikes by the Fed, which seems behind the curve on inflation, I fully expect bitcoin to go down with Nasdaq. I would not be surprised if the dollar and gold rally together, should the EU economy get hurt in an energy crisis driven by Kremlin counteractions.

Quantitative easing has broken down a lot of correlations and the Ukrainian crisis has not helped clear up this mess. We can see pressure on the euro from expanding rate differentials with the U.S. as well as from spiking natural gas prices. While I admit that it may sound truly bizarre, the present situation may turn out to be equally bullish for both gold and the U.S. dollar, two assets that normally are inversely correlated.

A Look Ahead by Louis Navellier
Where Will the Fed’s MMT Trillions Land Next?