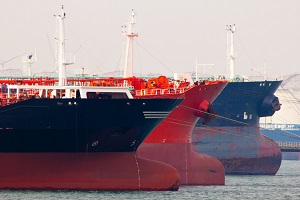 The big news continued to be the shocking collapse of crude oil futures prices. The May futures contract for crude oil actually went severely negative on Monday, since apparently no one wanted to take delivery of crude oil as the May futures contract expired. On Tuesday, crude oil futures for June, July, August, and several other months declined on the fear that the glut will persist. The Wall Street Journal on Tuesday reported that about 80 of the 750 supertankers in the world are being used just to store crude oil, rather than transporting it. WSJ also reported that 147.6 million barrels of crude oil are stored at sea – 21 million more barrels than in the previous week. Finally, the Energy Information Administration announced that oil inventories rose by 15 million barrels per day in the latest week, the 13th consecutive weekly increase.

As crude oil has demonstrated, there is no doubt that deflationary forces are spreading. If deflation persists for too long, it could become a threat to stock valuations. Fortunately, low commodity prices and ultralow interest rates are currently boosting dividend stocks, so, for now, dividend stocks remain an oasis.

The economic news last week reflected the mid-March national shutdown. The National Association of Realtors on Tuesday announced that existing home sales declined 8.5% in March to an annual pace of 5.27 million. The inventory of existing homes for sale rose to a 3.4-month supply in March, up from a 3-month supply in February, but inventories remain extraordinarily tight. The median home price rose to $280,600, up 8% in the past 12 months, due to tight inventories. As long as median home prices continue to rise due to tight inventories and low mortgage rates, it should help to suppress growing deflation fears.

The Commerce Department announced that new home sales declined 15.4% in March to an annual rate of 627,000, reflecting the largest monthly drop since July 2013. February’s new home sales were revised down to 741,000 from the 765,000 previously reported. Obviously, April’s new home sales are expected to be even worse, due to stay-at-home orders and rising unemployment. Nonetheless, the inventory of new homes for sale remains tight and with ultralow mortgage rates, new home prices may keep rising.

On Wednesday, Senate Majority Leader Mitch McConnell said he favors allowing some struggling states to declare bankruptcy rather than rely on endless federal bailout programs. He said that bankruptcy “saved some cities, and there is no good reason for it to not be available.”  States in trouble include California, Connecticut, Illinois, New Jersey, New York, and Rhode Island. They are in precarious financial shape due to pension liabilities and rising unemployment claims. Another alternative is that these states will have to reopen, since the cost of keeping their economies shut down may prove to be too high.

Finally, on Friday, the Commerce Department announced that durable goods orders plunged 14.4% in March as demand for big ticket items, like aircraft and vehicles, plunged. Economists were expecting a 12.8% drop, so the plunge was worse than anticipated. Orders for vehicles plunged 18.4%, making it problematic to re-open many U.S. auto plants, since a lot of inventory remains on dealer lots. The good news was that, excluding transportation, durable goods orders only fell 0.2% in March. The other good news is that core orders rose 0.1%, so there was at least one “green shoot” in the durable goods report!

In case you wondered, the economic news from Europe is much worse. On Thursday, the HIS Markit flash eurozone services purchasing managers index plunged to a record low of 11.7 in April, down from 26.4 in March and well below economists’ consensus estimate of 24. Since any reading below 50 signals a contraction, the service sector contraction in Europe – at a meager 11.7! – was simply horrific.  second-quarter euro-zone GDP contraction of 7.5% is now anticipated. As I have said repeatedly, in the U.S., we are fortunate to be able to learn from Europe; they are reopening their economies ahead of us, since the coronavirus struck Italy, Spain, and other European countries earlier than the U.S.

Income Mail by Bryan Perry
What to Make Of a “Viral” U.S. Market

Growth Mail by Gary Alexander
Who Will Be the First Brave Business Owner to Open Up Shop?

Sector Spotlight by Jason Bodner
What’s Next: Bounce or Bust?