The similarity between 2018 and 2021 is that long-term rates are generally rising, but the Fed is not pushing them up this time – the bond market is. Because of the current Fed balance sheet growth, I think we’ll have an upside bias in the stock market into the end of the year, but with more volatility.

My guess is that some type of shakeout is coming for the broad market indexes, but it will remain limited to around a 10% decline, if that. That’s about the size of the maximum correction we have so far (since the stock market bottomed on March 23, 2020) at this rate of balance sheet expansion. The tech sector may be in for larger (than 10%) volatility when the 10-year yield makes a run for 2%, which may be only a matter of weeks, given the likely further pickup in inflation readings in the next couple of months.

Quantitative easing (aka, Fed balance sheet expansion) affects the level of the stock market. When the Fed shrinks credit spreads, it sends a signal to investors to buy stocks. (Shrinking credit spreads are an indicator for pension funds to buy the riskier bonds and more stocks). But spreads are not shrinking because the economy is improving, but because the Fed is pushing them there. One could think of the present as an extreme form of QE – as “skipping the bear market” for stocks. 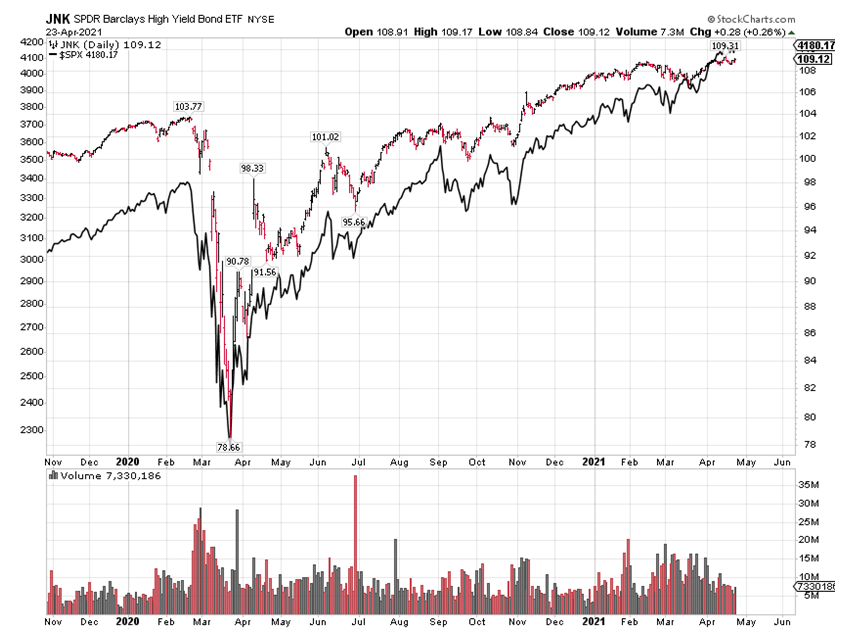 There is a heavy correlation between a total return chart for junk bonds and the S&P 500 (pictured above), which basically means that if the Fed is intervening in the junk bond market, it is also intervening in the stock market more directly than it does with mortgages and Treasuries only, which was what the Bernanke Fed originally did in 2008-2009.

The Land of the Rising Central Bank Balance Sheet

It is worth pointing out that what goes on in Europe and Japan is more extreme compared to what goes on in the United States. To be more precise, the European Central Bank (ECB) is more extreme than the Fed, relative to the size of the eurozone GDP, while the Bank of Japan (BOJ) is more extreme than either one, relative to the size of Japan’s GDP. Still, ECB operations have pushed the German DAX Index to an all-time high, similar to the Fed vs. the S&P 500 Index, while more extreme BOJ activity has not managed to move the Nikkei 225 to an all-time high. This is because at the time of the Nikkei all-time high in 1989, Japanese stocks were so hopelessly overvalued that they made the 2000 Nasdaq look like a mini-bubble. 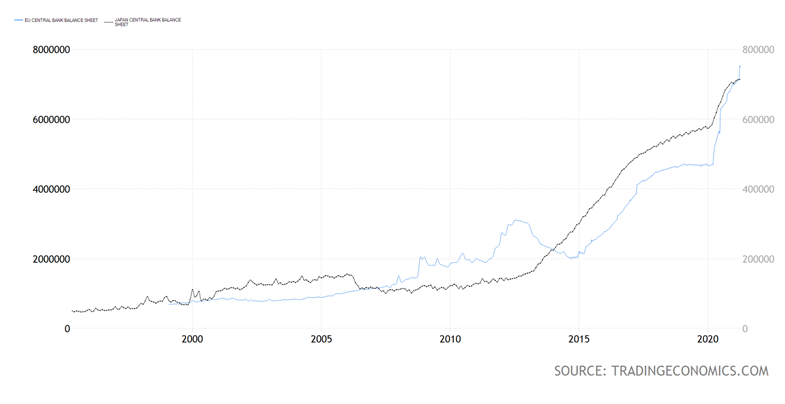 The BOJ’s intervention in Japanese financial markets is so extreme that it ended up owning 7% of all listed Japanese stocks (see December 15, 2020 WSJ, “The Market the Central Bank Bought”). Unlike the Fed, which deals in fixed income securities only (including junk bonds), the BOJ buys stocks and ETFs.

While the BOJ may one day succeed in pushing the Nikkei 225 above 40,000 – even if they run out of trees on the islands of Japan to print yen – I doubt those yen will be worth the same as they were in 1989.

It needs to be pointed out that central bank balance sheet growth is “creating money,” but for financial institutions only. It can manipulate the prices of both stocks and bonds, while affecting only the monetary base “M0,” the narrowest measure of money supply. Deficit-spending, on the other hand, can create inflation as it injects money directly into the economy and into people’s pockets, affecting broader forms of money supply, such as M1, M2, and M3, particularly via loan guarantees.

With this assault on money supply by the Powell-Yellen “modern monetary theory” team, I think the inflation rate in 2022 will be significantly higher compared to where it is today, which spells out a bullish scenario for gold bullion over the next year, and most likely longer.