I am writing this on Sunday, as the French Presidential election results are coming in. It appears that the incumbent Emmanuel Macron has won, which is good news for France, as a Marine Le Pen win would have been bearish for the euro. A deeper long-term dilemma is that Ms. Le Pen has fared progressively better in each election she has been a part of, which is a disturbing trend in French politics.

Even without the French election, the euro has had a rough year. It has been weakening since last summer and we are about to experience another episode of conflicting central bank policies, where the Fed will be tightening monetary policy, while the ECB will be lagging the Fed. For a period in 2022, the Fed balance sheet will be shrinking, while the ECB balance sheet is still expanding. This is decisively euro-bearish, and we have yet to see the full effects of the Ukrainian war on the euro, which is far from being resolved.

There was mention last week of the EU putting a ban on Russian oil after the French presidential election, which in my opinion has the potential to create a price spike in the seasonally strong summer period, which can carry oil to fresh all-time highs. Such sanctions have not yet been announced – and I sure hope they won’t be – as I am convinced that we have not seen the full backfiring effect on the global economy.

Europe already has had to deal with a horrific price spike in natural gas, reaching the equivalent of $368 per barrel oil at the onset of the Ukrainian crisis. A similar price spike in Brent crude (chart above) is not going over well for the EU economy, but there is a difference in the case of natural gas, which is not fungible and affects only Europe, whereas crude oil is fungible and affects the whole world. 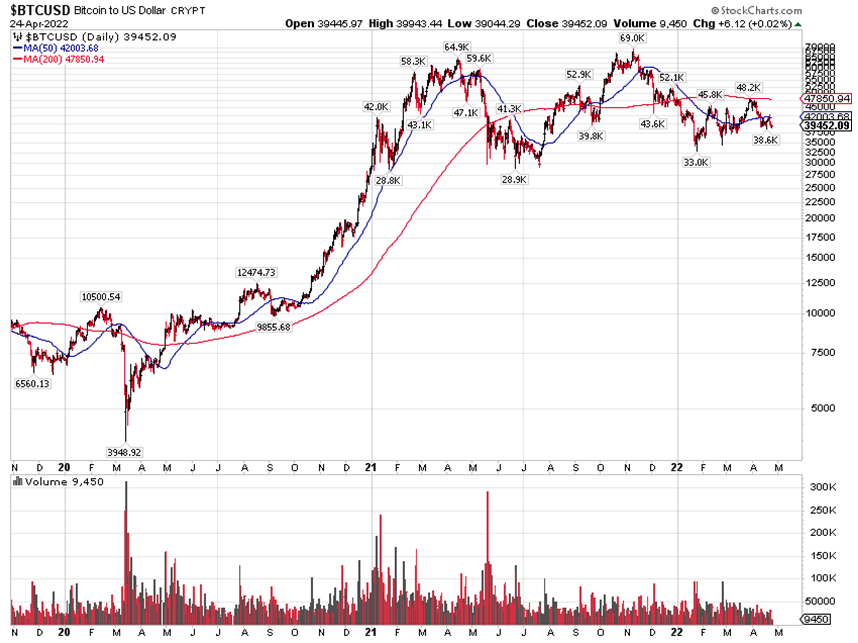 Bitcoin is not acting well. There is no growth of new “wallets,” which is necessary to push the price higher. When bitcoin prices get into the low $30k area, better than half of bitcoin holders will be sitting on escalating losses, which can cause a self-feeding effect of prices cascading lower.

Bitcoin does not act as an inflation hedge, but as high-beta stock, similar to the ones found in the ARK Innovation Fund (ARKK), which has also been having a hard time of late. High-beta stocks with little or no earnings should continue to have a hard time with rising interest rates and inflation near 40-year highs.

A Look Ahead by Louis Navellier
Why the U.S. Is Still the #1 Global Oasis for Investors

Sector Spotlight by Jason Bodner
Did Powell Put a Real (or Fake) Tarantula on the Market’s Face?