3-24-20: Lessons Learned While Driving from New York to Florida 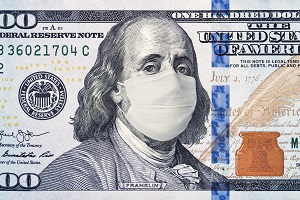 Last Monday, I went to Ithaca, New York to drive my youngest daughter home from college. Cornell was closing the campus and allowing classes to be held via the Internet from homes, like ours in Florida. (Unlike the “Spring Break” kids, we were driving to Florida for more study, not partying.)

That evening, we had dinner at a sports bar in Ithaca, New York, but we had to rush to finish before the governor’s mandatory 8:00 pm state-wide shutdown. I can tell you that the folks there were very perturbed, especially since Ithaca is not as crowded as New York City. Compounding matters further, these sport bar patrons were already perturbed that there were no TV sports to watch!

On Tuesday, after driving most of the day with my youngest daughter, Crystal, we were relieved to see that North Carolina had not entirely shut down for dining, but there was a 5:00-pm curfew on indoor dining, so we had a nice meal outside, keeping our “social distancing” at all times. The restaurant industry is a major employer, so I am sure that weekly unemployment claims will be skyrocketing soon.

We were in South Carolina during the market lows on Wednesday, and I commented on the downbeat retail sales report and super-low oil prices in my Wednesday podcast. It was great to fill up the tank with low-priced gas on the road, but with people quarantined in their homes, the gasoline glut will only grow, and the resulting deflation is usually a worse threat to the economy than price inflation in the long run.

On my Thursday podcast, I discussed that there were some credit market problems last week in Australia, Italy, and other countries as well as with U.S. Treasury notes, bonds, and corporate debt, since yields were rising early last week. This has caused massive central bank support from the European Central Bank, the Fed, and other central banks that helped to finally push yields lower on Thursday and Friday.

The other subject that I mentioned on my Thursday podcast was an anti-malaria drug called chloroquine, which had a very successful trial in France that killed the coronavirus in a limited trial on 40 patients afflicted with the virus. President Trump mentioned the promising results for chloroquine in his press conference on Thursday and the FDA announced expedited trials. So, hopefully, if FDA trials of chloroquine go well, then we may finally have a treatment (and later a vaccine) for coronavirus.

Additionally, Gilead Sciences’ (GILD) Remdesivir is an IV drug that is currently undergoing clinical trials and is almost certainly going to be approved by the FDA, according to President Trump.

On my Friday podcast, I was much more upbeat, since aggressive central bank quantitative easing was finally driving Treasury bond yields lower. There is no doubt that the temporary yield surge was due to a rush around the world to raise liquidity in what the financial media is calling “the dash to cash.”

The bottom line is that after more capitulation selling pressure last week, the stock market is finally building a base that will effectively act as a “launching pad” for many stocks. A key development in the upcoming weeks will be when the auto plant closings and quarantine restrictions will finally be lifted.

There is no doubt that the recent bar, restaurant, and casino closings will be lifted as the weather warms, since heat and humidity should help squelch the expansion of the coronavirus. Let’s hope that these restrictions will be lifted sometime in April, since many Americas cannot stay cooped up for too long.

Offsetting that downbeat news, the National Association of Realtors reported that existing home sales surged 6.5% in February to an annual pace of 5.77 million, the strongest rise since 2007. In the past 12 months, existing home sales rose 7.2%, causing a tight 3.1-month supply of homes for sale at the current sales pace. Although the coronavirus will undoubtedly squelch March existing home sales, I expect that existing home sales will resurge in later months due to lower mortgage rates, especially after the “stay at home” orders are lifted, and regular commercial services reopen – i.e., when we all get back to normal.

February was the calm before the storm in coronavirus terms. March statistics will likely be far more depressing, pushing the first-quarter GDP figures below 0% growth, followed by worse GDP statistics in the second quarter, pushing us into a recession (two quarters of negative GDP). Two months ago, there was no sign of any recession in sight in this election year, but this “bug from nowhere” changed all that.

Global Mail by Ivan Martchev
The U.S. Dollar Is at An All-Time High