“ARE WE ABOUT TO POP? Bubble, bubbles everywhere – so say an increasing number of Wall Street professionals, who see the lofty prices of everything from equities to Bitcoin, from new homes to soaring values of newly public companies, as clear signs that the financial system is again on the verge of a major reset similar to what happened in 2000 and 2008…” – Time Magazine, March 29-April 5, 2021

Is another crash coming? The scars of 1987, 2000, 2008 and last year are seared into our consciousness for the traumatic losses they brought. But now that we have seen 80% gains from last year’s lows, let’s take a rational look at the age-old question: Which is more rewarding in the long run: Totally avoiding each and every one of those market meltdowns, or risking missing out on the market meltups that follow?

Putting the question more precisely: Are we better off riding through all the major market storms fully invested, or trying to guess the market tops through “market timing,” by selling a major portion of our portfolio when we think markets are near their top – and then re-investing all our chips near the bottom?

After all, if you’re a market timer, you’ve got to get both sides of the equation right, because the rise from the bottom can be just as rapid and paralyzing as the dizzying fall from the top. 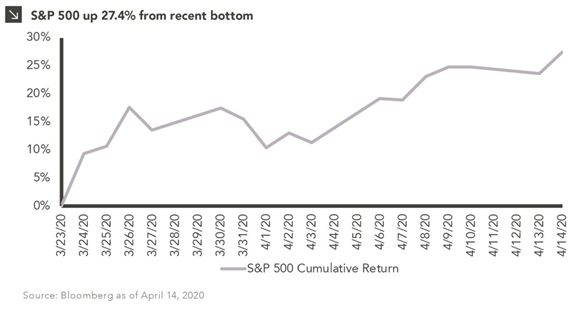 The recovery was so rapid and unexpected that if you didn’t buy stocks late Monday or early Tuesday, you were left in the dust waiting for a convenient entry point that never arrived. This is true of most of the major recoveries in stock market history. Investors seldom have time to get on board near the lows.

Up Close and Personal with Some 1990s Crash Warnings

In addition to my 24-year affiliation with Louis Navellier, I have worked with many other advisors and newsletter editors over the last 40 years. I’ve heard many dire warnings about the “crash to come,” most of which never came. When the New Orleans Investment Conference (NOIC) assembled in October 1990, the Dow was down almost 20% after Saddam Hussein’s invasion of Kuwait, a doubling of oil prices and the expectation of a much larger stock market crash and oil crisis once a hot war broke out in Iraq.

In 1996, I was editing a financial newsletter written by a noted market timer who had predicted the 1987 crash and other corrections. She promised to send out her warning when she saw a correction coming, and that warning came on July 23, 1996, a day on which the Dow fell 44.39 points, the third consecutive day of 35+ point declines, totaling 117.63 points in three days (over 2%). However, the market began rallying the next day and a year later was up 50% (to 8000+) and up 100% by 1999. That newsletter soon died.

A better outcome happened during the week of October 5-9, 1998, when another newsletter editor and I were hosting a Swiss seminar in Grindelwald and the stock market was tailing off, as it had in 1990, and our 60+ investors were very concerned. There was little internet service, but our morning Herald Tribune was bringing sinking stock prices to our attention. The S&P 500 had declined 19% since mid-July due to the LTCM hedge fund crisis, but this editor was a long-term bull who told these nervous investors that he seldom invested on margin, but he had done so that morning since this felt like “a time of irrational fear.”

Overall, the recovery from the Great Recession was 84% in stocks within two years, about double normal. 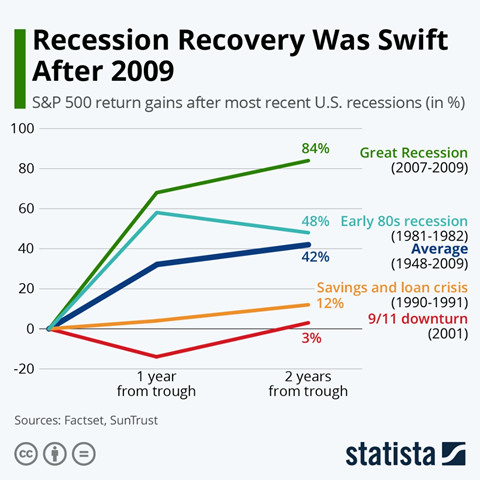 So please join me in Apocaholics Anonymous, and our sub-chapter, Former Market Timers Anonymous.

A Look Ahead by Louis Navellier
Inflation Fears Continue to Mount

Growth Mail by Gary Alexander
Which is Scarier – A Market Meltdown, or a Melt-Up?

Sector Spotlight by Jason Bodner
Tune Out the Noise – Including That Ringing Phone!