There are so many opinions about the Fed that you could pave a highway of paper to the moon and back with views, pro and con, about the impact that raising rates might have on various markets this year, but seldom do I see anyone going back to the last few rate-raising cycles to show us what happened.

In this column, I will bring you my capsule summary of what happened in the last four rate-raising cycles.

Up front, here is my capsule summary of what I see from the historical record of the last 30 years: 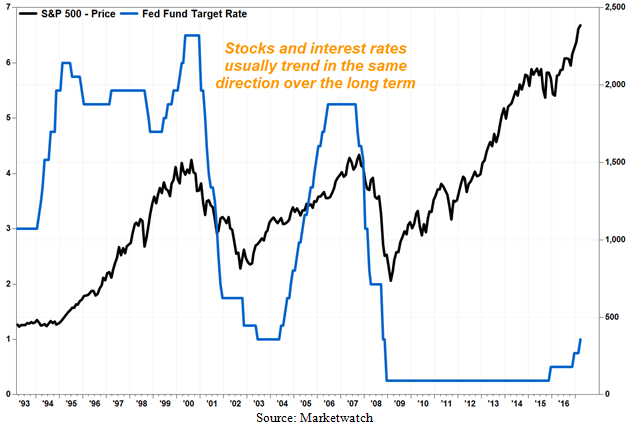 On Friday, February 4, 1994, Fed Chairman Alan Greenspan shocked Wall Street when he began a year-long pre-emptive strike against non-existent inflation by issuing the first of seven interest rate hikes. The Dow careened down 96 points (-2.43%) that day, from 3967.66 to 3871.42. Then it kept trending down.

Before Greenspan’s move, the Dow was closing in on a record-high 4,000, and inflation was only 3%.

As a result of Greenspan’s blunder, it took well over a year for the Dow to eclipse its record (set earlier that week) of 3,978.36. Meanwhile, President Bill Clinton fumed at the Fed’s assault, since the dismal 1994 stock market fueled a Republican Revolution during the mid-term elections of November 1994.

Here’s a summary of the 1994 rate-rising cycle:

Summary: Seven increases in one year, from 3.00% to 6.00%. The Dow lost 3% in that year. Gold also went down about 2% in those 12 months. This is what happens when a rate increase comes “out of the blue,” unexpected and unannounced, for no good reason. The Fed learned to announce their moves better.

The economy was soaring in mid-1999: For the full year, GDP rose 4.8%, unemployment was near an all-time low at 4.0%, and inflation was dormant, at 2.2%, but Greenspan wanted to slow the economy while also adding liquidity as insurance against an emergency cash shortage on January 1, 2000, due to the Y2K computer bug – a tricky double play. In all, he raised rates six times in 10+ months by just 1.75% (total):

According to most financial pundits, raising rates that much would send both the stock market and gold reeling. Financial pundits constantly tell us that gold suffers when interest rates rise, since “gold offers no income,” but that is not the case in most cycles. Gold hit its first bubble peak in 1980, at $850, when the Fed funds rate doubled from 10% (in April 1979) to 20% (in March 1980). In the past three Fed rate-raising cycles, gold has also risen in all of those cycles, most notably in the 2004 to 2006 cycle. 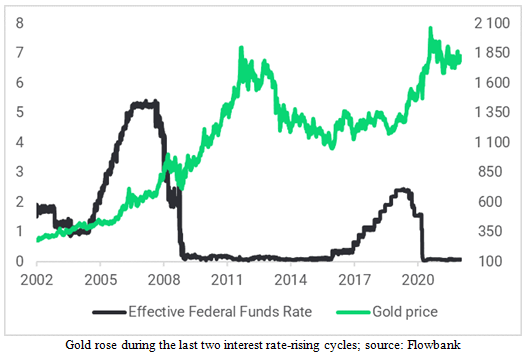 This 2004-06 cycle is the cleanest example of a long and predictable rate-rising cycle, with 0.25% rate increases in 17 straight FOMC meetings, and the stock market did very well, while gold and silver soared.

For 2022, Goldman Sachs sees gold rising to $2,150 or higher AND they see the Fed raising interest rates SEVEN TIMES, from 0.25% to about 2.0%, so they recognize that gold can rise along with rising rates.

Cycle #4: The Fed Raised Rates “One Time Too Many” in Late 2018 –
Causing Gold to Soar and Stocks to Collapse

Like 2022, 2018 was a mid-term election year – one which resulted in voters rejecting the dominant (then-Republican) Party in the House. In 2018, the Fed raised rates four times, but it also practiced quantitative tightening (QT), the opposite of today’s quantitative easing (QE), or money creation. They took money out of the system rather than printing more of it. Not much happened the first nine months, but when the Fed went too far, Fed Chairman Jerome Powell became the Grinch that stole Christmas.

Here’s the positive performance during the first eight interest rate increases in that cycle (2015-2018):

That could happen again this year, if the Fed went too far and raised rates more than four times this year.

Sector Spotlight by Jason Bodner
Imagine YOU Are the Fed Chairman – What Would You Do?