Wall Street has a habit of getting psychologically influenced by traditions, lore, superstition, and a long history of maxims. One of them is the “Santa Claus rally,” that is playing out true to form. That’s where the market rallies in the last five trading days of December and the first two trading days of January.

Then comes the “January effect.” According to Wikipedia, this is a seasonal anomaly in securities price increases in the month of January more than in any other month. The effect was first observed around 1942 by investment banker Sidney B. Wachtel. He noted that since 1925, small stocks outperformed the broader market during January, with most of the disparity occurring before the middle of the month.

It has also been noted that when combined with the four-year U.S. presidential cycle, the largest January effect occurs in Year #3 of a president’s term. How fitting for a market that has taken a sudden turn higher in the fourth quarter, leaving scores of investors on the sidelines out of fear from the trade war, an inverted yield curve, Brexit, and what will be four straight quarters of negative earnings for the S&P 500.

Now, the fear of missing out (FOMO) has taken hold of investor sentiment and, although the market is technically overbought on a short-term basis, there are positive indicators that will continue to feed the bull case for 2020. Here are five such indicators:

#1: The recent weakness in the dollar will be a catalyst to earnings for multinational companies. The dollar topped out in September, which coincides with the Fed telegraphing its new neutral stance on interest rates. The strong dollar – a major headwind for two years – is now a tailwind for stocks.

#2: The Wall Street Journal reported on November 5 that Lipper data estimates there is over $3.4 trillion in cash and money markets, up $1 trillion in the past three years to the highest level in over a decade.

#3: The estimated (year-over-year) earnings growth rate for 2020 is 9.6%, which is above the 10-year average (annual) earnings growth rate of 9.1%. All 11 sectors are projected to report year-over-year growth in earnings in 2020. Five sectors are predicted to report double-digit growth, led by the Energy, Industrials, and Materials sectors (source: FactSet, December 20, 2019).

#4: Following a good year like 2019, a larger portion of pension funding, year-end bonuses, and funds from year-end tax-loss selling will be invested in the stock market during January, causing January volume to swell well above that of December.

#5: There are several major upside technical breakouts underway that are giving a green light to an aging bull market, showing us that this bull market has more room to run. Most notably, those sectors that are most leveraged to economic expansion – such as the Russell 2000 and the industrial, consumer discretionary, materials, and metals/mining sectors – have room to excel in 2020.

Industrial Stocks to Lead in 2020?

As 2019 comes to a close, all manner of predictions of what to expect in 2020 are making headlines. Predictions range from interest rates to sectors, including price targets for gold, oil, currencies, and stocks. Fortunes and reputations will be won and lost on such bold calls for the year ahead.

In keeping with this tradition, I may as well throw my hat in the ring.

While I recognize the obvious strength in technology, utilities, and financials, their multiples are now running hot, as are valuations for these very popular market sectors. I’m also not in the mood to chase healthcare after such a torrid rally in the past two months, coinciding with waning poll numbers for Democratic Presidential candidates Elizabeth Warren and Bernie Sanders.

What I do see is the emerging macro argument for a U.S. and global earnings recovery theme in our growing participation in the industrial sector, which has for the most part traded laterally for the past six months. The biggest and best names in this space are multinational companies with exposure to markets in developed, emerging, and frontier international economies where the risk/reward is very attractive.

Investors can take a very straightforward approach to putting the industrial sector to work for their portfolios by considering shares in the S&P 500 Industrial Sector SPDR (XLI), which owns the top stocks in the sector, with a couple of huge bonus situations that could really juice total returns for 2020.

Within the top 10 holdings are beaten down shares of Boeing Co. (BA) in the #1 spot and a turnaround-in-the-making story, General Electric (GE), in the #5 position.

Shares of Boeing could rally huge on any breaking news surrounding the grounded 737-MAX, and GE is in the midst of aggressive asset sales and realignment of businesses that could force the most ardent bears on the stock to capitulate. There is also strong potential for Honeywell International (HON), Union Pacific Corp. (UNP), Raytheon Co. (RTN), and Lockheed Martin (LMT). They all have multi-month basing patterns that historically lead to major upside breakout moves.

In this three-year chart of XLI, the shares topped out in January 2018 at $80.80 per share. Since then, the chart shows a quintessential reverse head-and-shoulders pattern with the most recent move showing a clean upside breakout at the $81 level – at the very beginning of what I view as a new uptrend. 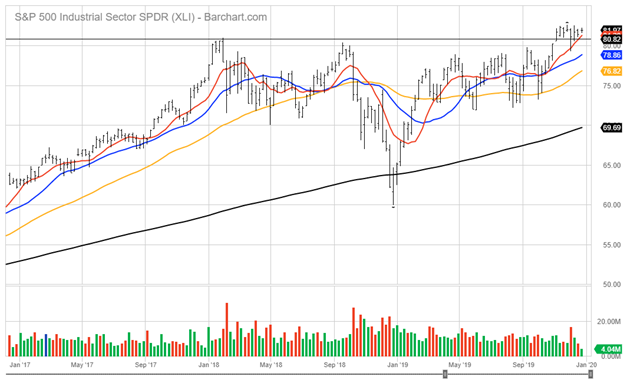 On the heels of this torrid year-end run, where the major averages are arguably extended on a short-term basis, I believe any bouts of profit-taking in January will be shallow and provide a buying opportunity in the industrials that will prove to be the best-performing sector in 2020.

Not a promise, just a fearless forecast.