Now let me turn to the “defining event” or trend of the 2010s – like 9/11 or the 2008 financial crisis was to the previous decade, or the end of the Cold War and the rise of the Internet was to the 1990s. Quick: Name one or two defining events of the 2010s to rank with the gravity of previous decades. When I scanned five or six news services for their defining events of the decade now ending, they named (1) the capture and death of Osama bin Laden, (2) the election of Donald Trump, (3) Brexit, or (4) impeachment (neither consummated). They named various hurricanes, earthquakes, or disasters, but none out of the ordinary in historical terms.

Let’s face it: This past decade was only newsworthy because a half-dozen cable news networks are on the air 24/7 telling us that every trivial event is newsworthy – and sadly, quite a few nut cases came out of their caves to try to create a name for themselves by going out in a blaze of fire – but there was nothing like a Cold War ending, or Internet invention, or 9/11, or 2008 crisis. We had Greek bond bailouts, but Greece is a third-rate euro-economy. We also had “Occupy Wall Street” for a season, but it was much ado about nothing.

By comparison, the 1910s had World War I and a global flu epidemic, and the 1810s had the Napoleonic wars and our War of 1812. The 2010s had Anthony Weiner, AOC, and a non-stop parade of other media celebrities. 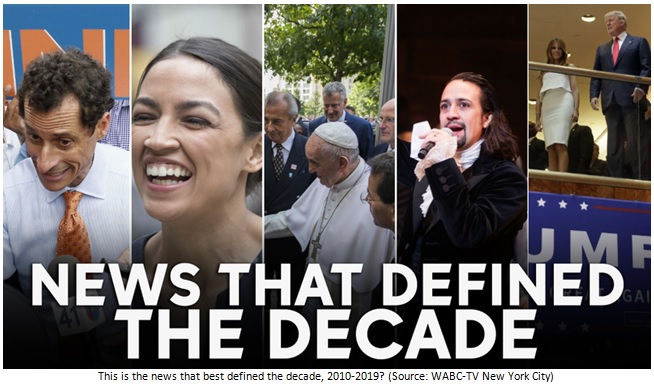 In economic terms, the 2010s were the Goldilocks decade. The 1980s delivered supercharged economic growth and the 1990s delivered the best decade ever in real stock market returns, while the opening decade of the New Millennium was the opposite – the worst decade ever, in terms of real total stock market returns. (The 1930s were a deflationary decade, so the losses were ameliorated by zero inflation and high dividends.)

On December 20, 2009, The Wall Street Journal confirmed this sad fact, writing, “Since the end of 1999, the Standard & Poor’s 500-stock index has lost an average of 3.3% a year on an inflation-adjusted basis, compared with a 1.8% average annual gain during the 1930s when deflation afflicted the economy, according to data compiled by Charles Jones, finance professor at North Carolina State University.” 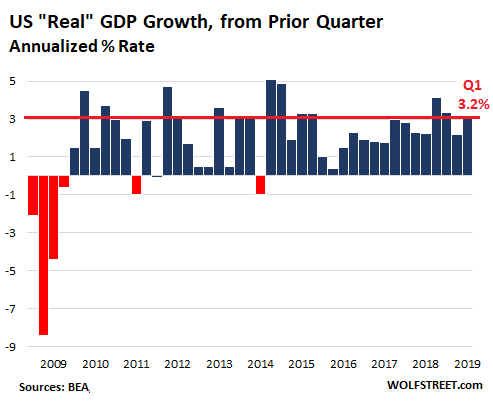 By contrast, the 2010 decade was a “Goldilocks” decade, with moderate GDP growth and moderate stock market gains, the 4th best stock market gains in the Dow’s 12-decade history. We have been able to sustain the longest economic recovery, precisely because it has been a modest recovery with no great peaks or valleys.

If you wanted to slice market history into six fairly even 16-18-year periods, it’s amazing how different the returns would be, with the stock market only beginning to soar at the start of 2016, less than four years ago: