12.3.19: Reflections from a Holiday-Shortened Market Week

In a holiday-shortened trading week, not much happened. I have tried to tune out the impeachment circus on TV, as I do not believe it is an economic event. In the event the President is impeached by the House and the circus moves to the Senate, based on the present evidence, I don’t believe the Republican senators will vote him out of office. In the small chance that a smoking gun is found, and the Senate votes Trump out of office, will Mike Pence reverse any of the Trump policies before the next election? I don’t think so.

In other words, the impeachment process, as important as it may seem, is not an economic event. 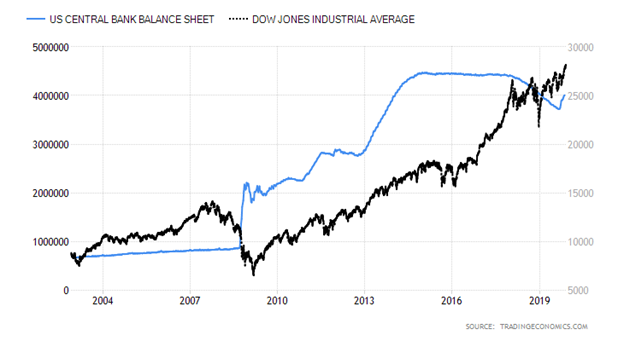 I am not surprised to see the stock market at all-time highs, since the Fed is on the sidelines after reversing their course since they clearly overtightened in 4Q 2018, leading to epic unseasonal volatility in the stock market last December, catalyzed by the relentless Twitter attacks by the White House.

The President’s Twitter attacks on the Fed have calmed down somewhat as the Fed is on track to largely undo its monetary tightening. The Fed has announced that its balance sheet may reach a new record by mid-2020 based on its present $60 billion-per-month Treasury bill buying spree.

The size of the Fed’s balance sheet is not the only determinant for today’s stock prices, but it sure does help, given that the balance sheet shrinkage in 4Q-2018 can be blamed to a large degree for the sharp declines of a year ago, amidst good economic data and sharp earnings gains for the major stock indexes.

Without getting too technical on why quantitative easing is like printing money – but for financial institutions only – I will say that it clearly affects the prices of stocks and bonds. Since it has yet to backfire (as it does not produce outsized growth in the broad money supply), we have to assume that the Fed will keep easing until it does not. Without a recession and with that much boost in the monetary base, this is bound to rub off positively on stock prices. A trade deal with China is key to continued good times, as the markets are clearly pricing in a trade deal – and they will be disappointed if it does not happen.

In theory, the economy should re-accelerate in 2020, based on the major tax cut in December 2017. The economy showed a clear pattern of a surge in the first year after the major Republican tax cuts in 1986 (Reagan) and 2003 (Bush), then a pause a year later, followed by reacceleration in the following year.

The reacceleration in the “following year” for the Trump tax cuts would be 2020, or so the theory goes. 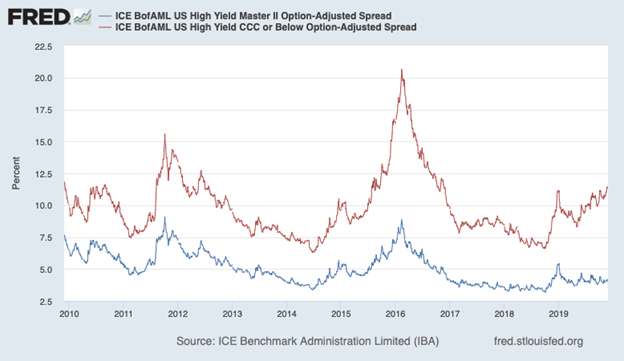 When I look at my credit market indicators, however, I see a fly in the ointment. It is not yet a sign to hit the panic button, but I see “the junkiest of junk” – CCC-rated or lower – starting to show considerable stress. CCC spreads to Treasuries are wider than they were in December 2018, while the rest of the junk bond market shows pretty normal spreads, much narrower than in December 2018. December 2018 is a good reference point as the selling was serious in both stocks and bonds with overall good economic data.

I must add that junk bonds tend to weaken significantly before a recession and generally are viewed as good indicators of economic activity. So far, the action in CCC credits is manageable, but we have to keep in mind that if the economy reaccelerates in 2020, those CCC spreads should not keep expanding and the overall junk bond market should be well behaved. I suppose we will find out soon enough.