I have raised some eyebrows lately with my forecast of 40,000 for the Dow Industrials by year-end 2020, but consider that President Trump will be on a perpetual promotion campaign for the stock market in 2020, commencing with his State of the Union speech. As a cheerleader for the U.S. economy, he simply has no peer. Even when his Democratic opponent is finalized at the National Convention in mid-July, I doubt that his opponent can match President Trump’s economic enthusiasm and energy in campaigning.

In addition to having a “Cheerleader in Chief” propelling the stock market higher, improving earnings and positive guidance bode well for the stock market in 2020. Furthermore, the rush to buy high-dividend stocks bodes especially well for the Dow Industrials, which are loaded with reliable dividend growth stocks, like Apple, Boeing, Home Depot, Intel, McDonalds, Microsoft, Nike, Procter & Gamble, United Healthcare, Verizon Communications, Visa, Walmart and Walt Disney. All these stocks have boosted their dividends in the past couple of years and more dividend hikes are anticipated in 2020.

Navellier & Associates does not own Boeing, Nike, Procter & Gamble, United Healthcare, Verizon Communications, or Walmart in managed accounts or a sub-advised mutual fund but does own Apple, Home Depot, Intel, McDonalds, Microsoft, Visa and Walt Disney.  Louis Navellier and his family do own Apple, Boeing, Home Depot, and United Healthcare, in private accounts but do not own Intel, McDonalds, Microsoft, Nike, Procter & Gamble, United Healthcare, Verizon Communications, Visa, Walmart and Walt Disney.

The economic indicators are “mixed” for now, which means the Fed will likely stand pat on interest rates. 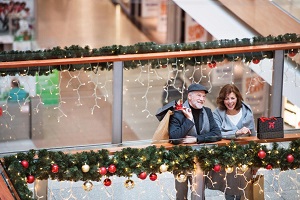 Last Tuesday, the Conference Board announced that its consumer confidence index dipped slightly to 125.5 in November, down from 126.1 in October, the fourth straight month that consumer confidence has declined and a bit of a surprise, since economists were expecting the index to rise to 126.6. However, Lynn Franco, senior director of economic indicators at The Conference Board, said that “short-term expectations improved modestly, and growth in early 2020 is likely to remain at around 2%. Overall, confidence levels are still high and should support solid spending during this holiday season.”

The Commerce Department announced on Wednesday that durable goods orders rose 0.6% in October, which was a pleasant surprise, since economists forecasted a 1.1% decline. Commercial aircraft orders rose 11%. Orders for new vehicles and parts declined 1.9% in October, so despite booming aircraft orders, excluding the transportation sector, durable goods orders still rose 0.6% in October. Business investment, which excludes defense and commercial aircraft orders, rose 1.2% in October, which is the biggest monthly gain since January. This dramatic uptick in core business orders is very encouraging, since these orders have fallen over the past year and has been indicative of weak business spending.

Black Friday and Cyber Monday sales provide some insight into consumer spending this holiday season. According to Adobe Analytics, Black Friday’s online sales were $6.22 billion, up 23.6% compared to a year ago. This raises expectations for Cyber Monday sales. Since Thanksgiving was late this year, the holiday shopping comparisons are expected to be especially favorable. Overall, consumer spending remains strong, which bodes well for this holiday shopping season as well continued strong GDP growth!