Following a record-breaking Black Friday through Cyber Monday shopping spree by U.S. consumers, it will take a major chain of negative events to undo a strong undercurrent of year-end bullish sentiment.

After all, the consumer has been the driver for the domestic economy in 2019, and for good reason – interest rates are low, the employment rate is low, gas prices are low, food prices are stable, home prices are rising, and worker wages are rising while their IRA and 401K plans are also appreciating nicely.

One good piece of news is that consumers are doing a better job of managing their debt. The latest data show households are paying out less of their disposable personal income for debt service than last year. 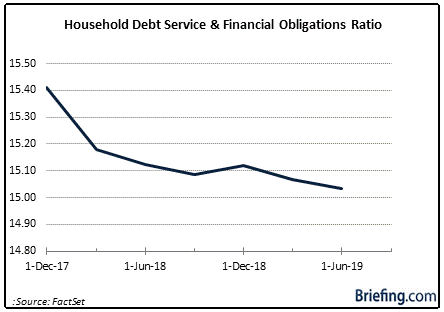 There is also a prevailing belief that the U.S. economy is not going to enter a recession anytime soon. Instead, the notion of a pick-up in GDP in the first quarter of 2020 is rising among the collective mindset on Wall Street. If the stock market does take a dive in December, it won’t be for fundamental reasons.

Just to be sure no one is kidding themselves about why the S&P 500 is up 25.3% year-to-date and sitting at a record high – along with the Dow and NASDAQ – stocks have gotten there, in part, on the back of the widespread hope that a trade deal of some kind will get done. If there were real worry about the trade deal imploding because of the signing of the Hong Kong Human Rights and Democracy Act, the market would have shed more ground than what occurred in last Friday’s shortened trading session.

Since there were no headlines of any undoing of the trade deal over the weekend, there is a more hopeful attitude about the U.S. and China reaching a trade agreement that will curtail the threat of a 15% tariff rate being placed on $156 billion of imported consumer goods from China, starting December 15. That would be a negative, if it happens, but reporting on the issue this week might spur consumers to spend more in front of that possible tariff deadline and thereby goose the retail numbers that much more.

In football terms, the trade deal is deep in the “red zone, even first and goal at the five-yard line – pretty good odds, but definitely not overwhelming odds of scoring (about 70.7%, says footballoutsiders.com), and there is always the risk of a fumble. Against the most up-to-date narrative from China and the White House, I’d say this football analogy is statistically accurate about the chances of a signed deal happening.

During the past 15 months’ trade war, U.S. economic data has not caved in, as many bearish forecasters have warned. While there have been a couple of soft patches, the Fed responded with lowering short-term rates three times this year, and the economy’s pace has picked up heading into 2020. Will another round of tariffs on $156 billion of Chinese imports derail a $20 trillion U.S. economy? I don’t believe so.

We’ll know more later this week – especially if the mighty American economy can continue to thrive in spite of the trade war, which could ratchet higher in less than two weeks. Even if a “phase one” deal with China comes to pass without rollbacks, most of the tariffs on Chinese goods will remain in place. This raises the specter that long-term tariffs will become the “new normal” because there is little evidence that China will curb its state-dominated economic model that gave rise to the trade war in the first place.

It is core to any lasting deal that China stop coercing the transfer of foreign technology as the price of doing business there, while also unfairly subsidizing state-owned enterprises that fuel excess capacity that swamps global markets. At this juncture, there are no details on China being flexible on these issues, and this doesn’t even get into IP theft, cyber hacking, currency manipulation and importing illegal Fentanyl.

There is little evidence to support China being willing to change its behavior, leading me to believe that hefty tariffs on Chinese and U.S. imports will be indefinite. Under this scenario, the rally will likely pause and wait on more data to see if there is any material impact on the consumer. Previous tariff enforcement actions on $375 billion of Chinese imports have had little effect on consumer spending patterns (below; retail sales are measured month-to-month, so the first 10 months of 2019 reflect a cumulative 5.5% gain).

An additional round of 15% U.S. tariffs set to hit $156 billion of Chinese imports is a very real possibility – but the size and strength of U.S. consumer-driven economy supports the assumption that Americans will absorb it, adjust to it, handle it and move forward.