Since we just registered all-time highs in the major U.S. indexes, helped by the half-baked Phase I trade deal with China, one could not help but wonder what the Chinese market did at the same time. In one word, it did nothing. The Shanghai Composite has been cruising around 3,000 without much of an upward bias.

Besides the trade war, China faces other very serious problems, including pro-democracy demonstrations disrupting the local economy in Hong Kong, where the “for profit” nature of local business assures an upward bias of the Hong Kong Hang Seng Index. Such an upward bias is much less evident in the Shanghai Composite, where the mainland government directs a lot of the economic activity in the interests of “social stability” and GDP growth, not necessarily for economic profits. If the economy grows but profits in the aggregate do not follow, the mainland stock indexes are doomed to languish. 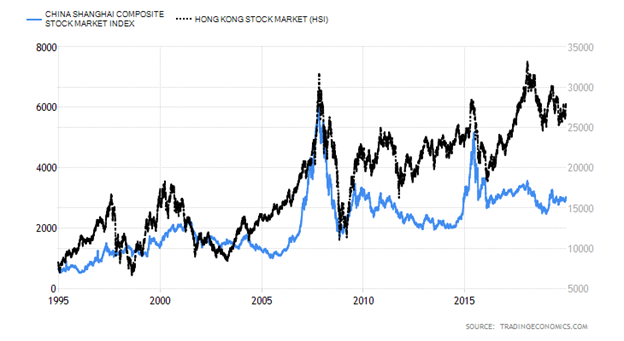 I know that the rapid GDP growth in China over the past 20 years has improved the lives of the 1.42 billion Chinese, but I think it will come at a very high cost in a busted financial system, whenever this credit bubble hits the wall. At the moment, it is unknowable when the crash will come as the Chinese government has a tight grip on the financial system, which has never been the case in a capitalistic economy of significant size.

Every time the economy weakens, Beijing injects new loan quotas, but how productively that financial infusion is invested is another story. Multiple red flags since the crash of the Shanghai Composite in 2015 have not produced the hard economic landing that would have happened if the Chinese economy were organized according to Western free-market principles, yet it is precisely those forced loan quotas and other government interventions that will be the source of the Chinese economic crash, whenever it may come.

I think that the longer the Chinese leaders keep doing what they are doing, the worse the eventual crash will be. When it happens, it should be bad because of the excesses built up in the system due to prolonging the expansion for so long using decrees of the Politburo Standing Committee of the Communist Party of China.

Investment Options in China vs. India

On the other hand, on the news of the Phase I China trade deal, the Indian stock market made an all-time high, which seems comical, to say the least. Just like Hong Kong, the Indian legal system is based on British law (similar to that of the United States), and the major Indian corporations are for-profit enterprises. In the Indian case, rapid GDP growth results in rapid profit growth and, therefore, big gains for the Sensex Index over time.

To recap their comparative performances, the Shanghai Composite is 50% below its 2007 peak, while the Sensex Index has doubled in the same time frame, so something must be going right in India, right?

The majority of lending in the Indian financial system is done by privately held banks, regulated by the Reserve Bank of India, which closely monitors credit growth in the system. I have heard many officials from the Reserve Bank of India opine over the years that the credit growth in the Chinese banking system is unsustainable and is likely to end badly. It has not happened yet, but I think they are onto something.

The issue for investing in India is that there are not a lot of ADRs for U.S. retail investors to buy, even though there are a few good mutual funds that have access to the local market. On the other hand, there are plenty of great Chinese companies whose ADRs are listed in the U.S. that defy the dismal performance of the Shanghai Composite. The issue with investing in China is that it must be done stock by stock and company by company.

Using a bottom-up approach to China stocks has produced a lot of winners in the past 10 years, while a top-down approach has produced dismal returns. The big problem is that the Chinese believe they can eliminate economic cycles in their version of state-sponsored capitalism, while I can give you very high odds that they cannot perform this miracle. It has never been accomplished in the history of capitalism, and I do not believe that what the Chinese are doing to elongate their economic expansion will prevent a recession from happening.