The economic news was light last week and most of it was centered on housing news. According to the National Association of Home Builders (NAHB), their confidence index rose to 76 in December, up from a revised 71 in November, and it is now at the highest level in the past 20 years (since June 1999). A year ago, home builder confidence was at 56, so there has been a dramatic improvement in the past year. NAHB Chairman Greg Ugalde said, “Builders are continuing to see the housing rebound that began in the spring, supported by a low supply of existing homes, low mortgage rates and a strong labor market.”

On Tuesday, the Commerce Department announced that new housing starts rose 3.2% in November to an annual pace of 1.37 million. In the past 12 months, housing starts have risen by an impressive 13.6%. Single  family and multi-family starts each remain strong. Building permits rose 1.4% in November and 11.1% in the past 12 months to an annual 1.48 million pace. A strong housing market could help push GDP growth to 3%.

On Thursday, the National Association of Realtors announced that existing home sales slipped 1.7% to an annual pace of 5.35 million in November, but economists were expecting sales to fall to a 5.21 million pace, so home sales came in 2.7% better than expected. The median home price in November rose to $271,300, up 5.4% in the past 12 months, while the inventory of existing homes for sale is now at a very tight 3.7-month supply, so this tight inventory of existing homes for sale bodes well for higher median home prices ahead.

The growing demand for mortgages to fuel the housing boom is now pushing market rates up. Even though the Fed made it clear that it does not intend to raise rates in 2020 – which is typical Fed behavior in a Presidential election year – an improving economy is notorious for putting upward pressure on market rates, simply because credit demand is rising. Even though inflation remains relatively tame, with or without inflation, interest rates are expected to rise as credit demand soars. Eventually, higher interest rates can cause investors to re-revaluate stock prices, especially for yield-sensitive stocks, but right now the 10-year Treasury bond yield remains slightly below the S&P 500’s dividend yield, so I expect steady appreciation in the upcoming months!

My 2020 Outlook is for a Bullish Election Year

Presidential election years are usually good for the stock market. In 2020, President Trump and his leading Democratic challengers will be running around promising anything and everything. Although the Democratic candidate will not be finalized until the convention in Wisconsin next July, I am expecting a moderate, positive candidate to prevail. Whether or not that nominee can match President Trump’s energy and enthusiasm will be tough to call, but two cheerleaders are better than one, since it helps to lift consumer confidence and spending.

President Trump is clearly a Cheerleader in Chief for economic growth, unemployment and the stock market, which bodes well for 2020. It is also clear that President Trump has a checklist of economic accomplishments that he wants to remind voters about on the campaign trail. With the tension associated with the Chinese trade spat now ebbing, the financial media is really struggling to find something to make investors worry. 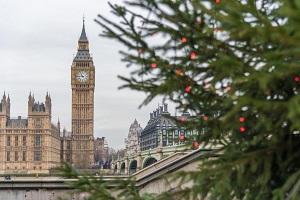 I expect Brexit to dominate the financial news in January, but Prime Minister Boris Johnson is an entertaining, brilliant politician and has been successful in uniting Britain behind his party’s landslide victory. I fully expect that the British pound will continue to strengthen, and that London will remain an important financial hub. Furthermore, since Britain has positive interest rates, while the rest of Europe is awash in negative interest rates, European capital should naturally flow into Britain seeking higher yields in a strong currency.

I expect both Prime Minister Boris Johnson and President Trump to continue to dominate the news in 2020. Consumers and investors are naturally attracted to positive leaders who are good at drowning out naysayers.

This background underlies my forecast of 40,000 for the Dow Industrials in 2020. As of last Friday, the Dow Industrials yield an average of 2.23%, while the 10-year Treasury bond yields 1.92%, and the S&P 500 yields 1.82%. Furthermore, since dividends have historically kept rising for the Dow Industrials, a 40% rally to Dow 40,000 in the next year I feel is very possible, since yield hungry investors are still chasing quality dividends as well as a favorable 23.8% maximum federal tax rate on qualified dividends!

The bottom line is that 2019 was an exceptionally strong year for the stock market because yield-hungry investors were chasing stocks with high dividend yields, since the S&P 500 had lackluster earnings. However, in 2020, investors will not only continue to chase dividend growth companies, but because the overall earnings environment will be improving, 2020 could be an even stronger year.