12.17.19: Some Index Funds Seem Rigged to “Fleece” the Average Investor

In other words, according to Bespoke, trading in these funds after normal market hours during the past two years delivered a cumulative advantage of 32.6%, 25.5% and 42.7%, respectively, for the S&P 500 (SPY), Nasdaq 100 (QQQ) and Russell 2000 (IWM), compared to trading during market hours.

Yikes!  Now you know why commissions are “free,” because investors are being fleeced on the ETF premiums or discounts when they buy and sell index ETFs during market hours. (If you want to track ETF premiums or discounts, just go to Morningstar.com and key in an ETF symbol to see the Intraday Indicative Value, which will reveal the net asset value of an ETF compared to the offer price.)

I have been warning you and the general public about investors being “fleeced” on these ETF premium/discount spreads for some time, including an article for Advisor Hub on April 6, 2018, “Are Your Clients at Risk of Being ‘Fleeced’ When You Buy & Sell ETFs”

What I find especially galling is how Wall Street is now promoting the trading of these popular passive indexes to naive investors during market hours, by telling these investors that passive index investing is better than the kind of active investing that I have made my life’s work. Because they don’t give you the whole story, this is probably a good time to remind you how and why I became an active investor.

I grew up just north of Berkeley, California, and I was indoctrinated in college that we should all “index” the market, since the stock market was supposed to be “efficient” and therefore impossible to beat. Furthermore, since this was Berkeley, I was also indoctrinated that if we did not embrace index investing, we would cause social unrest by trying to “get rich” by earning more than our peers and neighbors.

I didn’t buy into this line of thinking, even then. When I was in college over 40 years ago, I had access to one of Wells Fargo’s mainframe computers and was assigned a project on how to build a tracking portfolio that precisely tracked the S&P 500. Through a bunch of statistics and co-relation calculations, I figured out that I needed only 322 stocks to mirror the S&P 500. Unfortunately, I was a “failure” and was able to beat the S&P 500!  In other words, I learned that I was lied to in college, because there were clearly index anomalies and it was clear to me that the stock market is not efficient. That is why I now publish my stock grading databases, since I find index investing both immoral and grossly misleading. 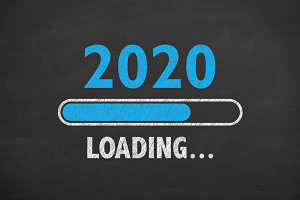 The Federal Open Market Committee (FOMC) met last week and it was a “non-event,” as they left key interest rates unchanged. More importantly, the FOMC’s “dot plot” signaled no key interest rate hikes in 2020 and maybe one potential rate hike in 2021. Their statement said that the “current stance of monetary policy is appropriate to support sustained expansion of economic activity.”  So, the Federal Reserve does not apparently want to be a factor, positive or negative, in Presidential politics over the next 12 months.

Inflation remains tame by all indications. The Fed’s favorite inflation indicator, the Personal Expenditure Consumption (PCE) index, is running below the FOMC’s 2% inflation target. The best way to describe the current inflation environment is “Goldilocks,” because inflation is not too hot and the Fed’s monetary policy is stable, which means that 2020 should be a great year – like most Presidential election years!

The Labor Department reported on Wednesday that the Consumer Price Index (CPI) rose 0.3% in November, but the core CPI rose just 0.2% in November. In the past 12 months, the CPI and core CPI are running at a 2.1% and 2.3% annual pace. Then, on Thursday, the Labor Department said that the Producer Price Index (PPI) and core PPI were both unchanged. In the past 12 months, the PPI and core PPI are running at a 1.1% and 1.3% annual pace, a full percentage point below the CPI on both counts.

Finally, the Commerce Department announced on Friday that retail sales rose 0.2% in November, which was well below economists’ consensus estimate of 0.5%. Since Cyber Monday occurred on December 2nd, some of the post-Thanksgiving sales were moved from November to December and distorted overall retail sales. October retail sales were also revised up slightly to a 0.4% increase from 0.3% previously estimated. According to Adobe Analytics, online holiday sales through Wednesday are up 14.1% to $105.4 billion, compared to a year ago, so it looks like December retail sales will be especially strong!