One could say that December 2019 is the exact opposite of December 2018. Instead of overtightening, as it did back then, the Federal Reserve is accelerating the growth of its balance sheet. Yes, that really is a form of quantitative easing, no matter how they spin it. Instead of dire headlines on the trade war, we have a Phase I deal with the Chinese, where new tariffs are canceled, and some old ones are cut in half. Instead of diving in an unseasonal manner, like we did in 2018 (where at one point in the month we were on track to deliver the worst December performance since 1931), the S&P 500 is at another all-time high.

Since it is the time of the year to make annual predictions, I will make mine. My 2019 prediction worked out very well (see December 26, 2018 Marketwatch article: “No bear market for stocks in 2019 because economy, earnings will keep expanding”). At that time, I was trying to filter out the senseless panic that was in the air on December 26, 2018 – the day of the 2018 intraday Dow Industrials low of 21,712.53. 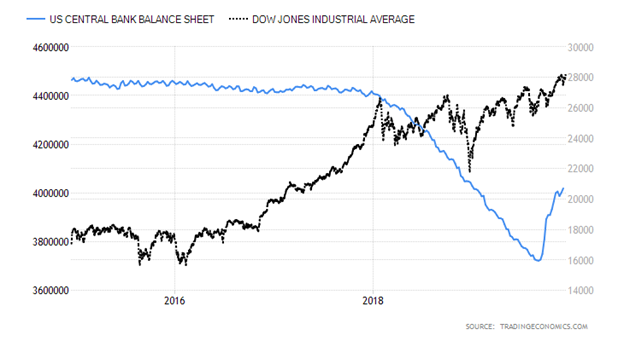 Keep in mind that we are likely to have an impeached president running for re-election with a record number of people working and unemployment near 50-year lows. I know everything is not perfect – it never is – but historically, a good economy has been an electoral advantage. My job is not to make political statements but to interpret how policies affect markets and help clients profit from those facts.

So far, what President Trump has done has been good for the stock market and the economy on balance, from a short- and intermediate-term perspective. I think the long-term implications of his tax cut are negative because of the unfunded liabilities of the government and the way deficits threaten the system, but I have never seen either a Democrat or Republican President worry that much about the long-term.

2020 May See Economic Reacceleration in the U.S.

I know that the Chinese trade deal is half-baked, with only Phase 1 beginning, but it does remove some uncertainty from the economic environment. China’s state version of capitalism utilizes an army of state-appointed buyers to source products and commodities where they are told to source them, not where it’s the best deal. That’s because China purposefully buys more from their neighbors to increase their political influence, and less from the U.S. This practice has been rightfully targeted by the Trump administration.

I sure hope there is a Phase II and both sides can declare victory. I don’t know if that will be the outcome, but for the time being the tension is being taken off the headlines. In a trade truce scenario, we may very well experience the second-leg effects of the Trump tax cuts. In 1986, President Reagan cut taxes and helped George H.W. Bush become president in 1988. In 2003, George W. Bush cut taxes and got re-elected in 2004. Major tax cuts create a sugar-rush phase, then a pause (which we are exiting right now), and then a reacceleration, which should come just in time for the Presidential election. In other words, President Trump is doing what any politician usually does, run for re-election on his record, which in this case would be a good economy in the U.S. and hopefully rebalancing the trade situation with the Chinese.

I believe that tax cuts do not pay for themselves and that structural reforms are needed in healthcare as well as entitlements. Leaving the situation as is will create much bigger problems in the future. But 2020 is an election year and I don’t believe anyone would dare mess with long-term structural issues now.

It looks like President Trump has the economy as a tail wind in his re-election bid. I would not be surprised if the S&P 500 gets to 3400 or 3500 by Election Day.