We usually trust big institutions to make smart choices. Big institutions, like big governments. We place immense trust in them knowing what they’re doing, but just because they’re big and in control doesn’t mean they’re smart. Take this: Since 1950, there have been 32 U.S. accidents with nuclear weapons, and six of these “oh-no” moments resulted in lost nuclear weapons that can’t be accounted for.

Even worse, the former USSR has lost 41 nuclear weapons. 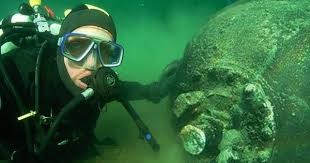 Speaking of big institutions, I believe big money dictates markets. That’s because 30+ years of data says so. But that doesn’t mean big money buying is always smart money buying. More on that in a moment.

First, we have to talk about last week: The buying was huge last week. Like, YUGE. Nine of 11 sectors saw buying in more than 25% of the universe, and a 10th sector (Consumer Staples) was right at 25%.

The table below says it all. The yellow boxes are when more than 25% of the universe logged buys.

One level down, we saw notable buy signals in the following Industries:

There was one significant sell area. REITs took it on the chin. But aside from that, it was all big buying.

Buying is great, it moves markets higher. But too much buying is like a party getting out of control. The cops eventually show up. When the cops show up, we would expect the market to come back to earth.

Our data indicates that a pullback is near, but it’s important that you know this: I do not think a crash is coming. I think the market will correct – or “revert to the mean” a bit. This is necessary and healthy, in order to resume its broader bull market path. If you ask me how far along we are in a bull market that is nearly 11 years old, we’re closer to the end than the start. That said, just because a baseball game is scheduled to run nine innings, that doesn’t mean they don’t run extra innings. Some have lasted days.

Sorry, I’m Turning into a Grinch Right Before Christmas

So, if a market pullback is close, I’m sure you want to know: When is it coming and how bad will it be?

The answer might be in the buying habits of big money. This brings me back to the tale of the lost nukes. Just because you’re “large and in charge” doesn’t mean you’re smart. Something mega happened this last week that popped my eyes open. ETF buying was off the charts. We saw an immense number of buy signals on Thursday and Friday – 73 and 53 respectively. Let me put those numbers into context: Going back nearly a decade to January 1, 2010 (about 2,500 trading days), the daily average ETF buy signal count is 6.5. So, we’re talking about 10 times the average buying level. Yeah, that big.

We wanted to know what this means for stocks in the coming weeks, so we went back and looked at similar instances of ETF big money buying. We searched for days of over 60 buy signals and found only seven out of 2,500. It’s a rare thing, but it almost happened twice last week, so when monstrous ETF buying happens, what comes next? The following table shows us that a selloff will likely follow.

As this table indicates, the averages of the past events suggest the near-term market high will come within a few trading sessions and an average +1.92% gain followed by a 6.38% decline in about 27 trading days.

That’s just about six weeks from now, after accounting for holidays like Christmas and New Year’s Day. That’s interesting timing, given the fact that last week I wrote that, with a proverbial gun to my head, I foresaw a market selloff in the second half of January. That allows for the “January Effect” of new money being deployed into the market, typically in the first days of the year. Note: In the table above, the least number of trading days to the low was 14 (in 2010). That translates to about three calendar weeks. 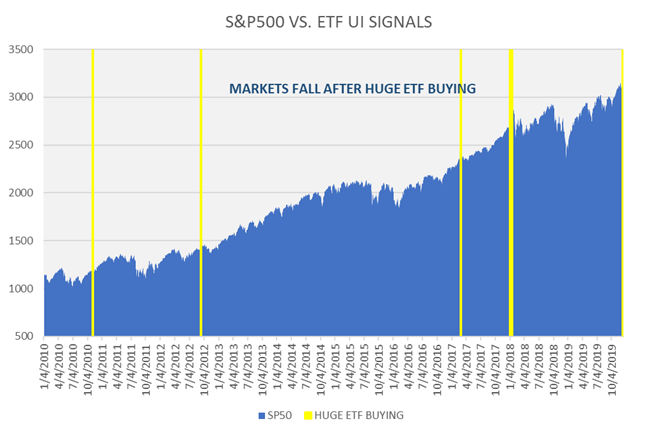 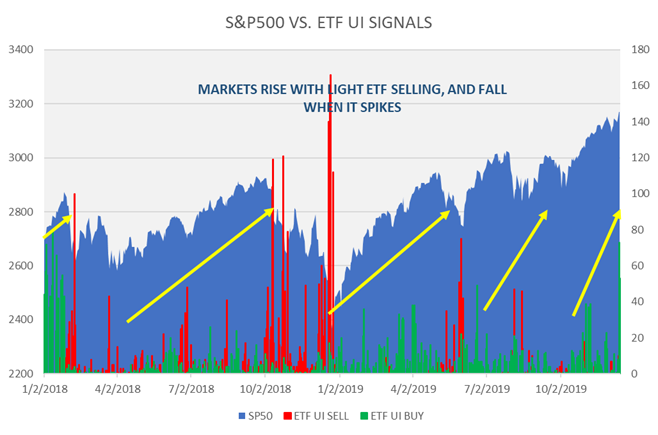 I don’t want to be a grinch here, but the market is drawing closer to becoming overbought. When our data shows a market being overbought, you can generally set your watches to a pullback coming soon.

What that means is: Don’t add risk now. Look to take profits or lighten positions in trades you feel are mature. Long-term core longs should remain in place. This is a pullback, not the end of the bull market.

As we head towards the holidays, know that the prospects for the continuation of this bull market in 2020 are still bright. But like a baby needs to burp, this market will give back some of these well-enjoyed gains. The big money is telling us that. And remember, don’t confuse big with smart.

Case in point: In 1987, Annie Liebowitz was offered a fat American Express ad campaign, but her own application for an Amex card was denied several times. Joe Wiesenthal made a perfect comment when Liebowitz examined her $24 million in debt: “Just because you’re rich, doesn’t mean you’re smart.”