Talk about a tale of two markets! While the S&P is having its best run in six years, Main Street investors are bailing out of stock funds at the fastest pace in decades. And based on the last time there was this dramatic of a drawdown in stocks, this is potentially a good sign for the bulls in 2020.

Per WSJ data, investors have pulled out over $220 billion in mutual funds and ETFs so far in 2019 – a record rate of withdrawal going back to 1992. That is either a giant-sized canary in the coal mine or a massive buy signal. Apparently, investors have transferred an ocean of money into bonds and money-market funds out of fear of the fragile trade war with China that will incite a long-awaited recession. 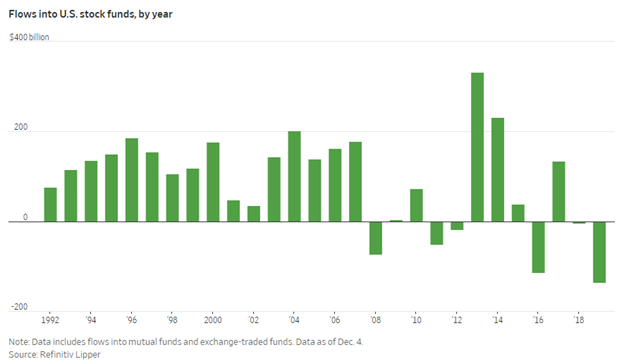 But then a funny thing happened last Friday. With the trade deal with China just waiting for a time and place to put the ink to the paper, the market didn’t wait for any formalities. Thursday’s headlines of an all-but-done deal triggered a wave of fresh buying that will surely build on itself if and when a signing ceremony is announced. And with so much cash on the sideline, it’s a bit daunting to imagine if that war chest of $3.4+ trillion in cash and money markets decides to start getting long equities.

During the past three years, assets in money market funds have grown by about $1 trillion, according to the Lipper division of Thomson Reuters, as cited by the Journal. Money market fund balances are now at their highest level in about a decade. The pundits call this “the great rotation” from growth into value.

Looking at all this skeptical cash on the sidelines, Jared Woodard, global investment strategist at Bank of America Merrill Lynch (BofAML), told The Wall Street Journal , “We take it as an incredibly positive sign on a contrarian basis.” BofAML uses a proprietary Cash Rule Indicator as a contrarian forecasting tool. It flashes a buy signal for stocks when cash balances held by investors rise above their long-term averages, and that indicator has been bullish during the last 20 months. Paula Polito, global client strategy officer at UBS Global Wealth Management, agrees: “Investors are holding large cash balances in a wait-and-see mode, even though nearly 50% anticipate higher stock market returns in the next six months.”

The offset has been corporate buybacks, which topped $1 trillion in 2018 and are expected to approach $500 billion in 2019. The outflows in mutual funds do not take into account individual stock purchases, so there needs to be some room for adjustment in how bearish these figures appear on the surface.

Granted, the 26.4% gain the S&P 500 this year doesn’t tell the whole story, since 2018 was so weak. The S&P is only up 10.2% since its 2018 high in late January of that year, providing not such a stellar two-year performance, netting a two-year average annual gain of barely 5%, with a fourth-quarter that scared the bejesus out of investors last year, when the index trap-doored by almost 20% in December.

Looking at the SPDR S&P 500 ETF Trust (SPY), representing the S&P 500 index, which pays a dividend yield of 1.73%, it is technically clear that the index has broken out above an ascending formation that carries with it the potential for a powerful upside move in the next three-to-six months. Imagine where the market might trade when some portion of that mountain of cash pours into equities in January, when corporate and government pension funding begin, and investors are stuck with fear of missing out. 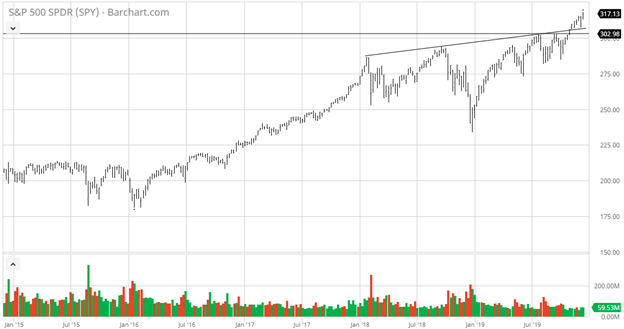 Against this backdrop of the reinvigorated global economic expansion that is working its way through trading desks around the world, an increasing number of fund managers have been buying depressed deep-cyclical stocks. And they’re buying those specific stocks where the latest third quarter results showed quarter-over-quarter improvement in terms of pricing, margins, revenues and earnings.

To this point, if the world economy is on the verge of picking up speed, the rally will not only broaden out to include more cyclical sectors, it will also be a time when the long end of the yield curve probably ticks higher, luring those trillions in “safe haven” cash and fixed income funds back into equities.

As of now, my newly-minted “global pick-up’ thesis runs completely counter to the “synchronized global slowdown” view held by the International Monetary Fund (IMF), World Trade Organization (WTO), United Nations (UN), Organization for Economic Cooperation and Development (OECD) and most of the financial media. And right or wrong, these bodies are influential to investor sentiment.

It looks like a Santa Claus rally is coming to town! Merry Christmas and and Happy Holidays!