Sitting near an all-time high in the major stock indexes, we’ll see some key events this week that could deliver an outburst of volatility in either direction. There is the UK election, the Chinese tariff deadline, Presidential impeachment votes and an FOMC meeting, for starters. In prior years, any of these four scheduled events could have moved the markets. Luck would have it that all four are coming this week.

Without making any assumptions, Britain’s Conservative Party has a near 10-point lead in the UK election polls and may very well win a majority in the House of Commons, which should mean an orderly Brexit. While the long-term implications for Brexit include a weaker EU and possibly weaker Great Britain, for the immediate future this “amicable divorce” would be a stock market positive. 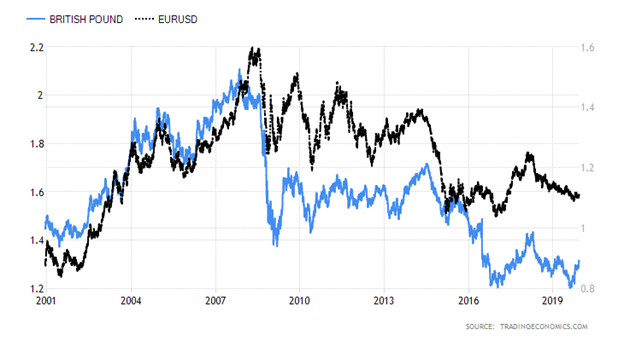 The British pound would likely catch a bid in such a scenario, as it has been cheerily rebounding in 2019 and so would the euro, even though the long-term structural risks for the euro remain, namely, there is no unified fiscal policy for the eurozone nations but one monetary policy for the whole eurozone.

The same goes for the impeachment votes in Congress. Without passing judgment on the President’s dealings with Ukraine’s military aid – my job is to look at such events with potential for them to move the markets – impeaching a sitting president going into an election year is an attempt to gain electoral advantage by the Democratic Party. It looks to me like there is enough evidence to send the President to trial in the Senate but not enough Senate votes to remove him from office. That means “the Clinton scenario,” where his impeachment went to the Senate and the stock market and economy ignored it, is in play. If the Senate acquits the President, then this whole circus will not be a market-moving event.

A Mirror Image of Last December, If…

In some respects, the present market environment is the exact opposite of last December. Last year we had an unseasonal decline. The S&P 500 registered its high for that month on the first trading day (at 2800) and fell to a low of 2346 on Christmas Eve – that’s one for the record books, without a recession. At one point, the headlines were declaring the worst December since 1931, which happened to be in the depths of the Great Depression, but the economic contrasts between 2018 and 1931 could not be starker.

A year ago, we saw multiple Tweets from the President saying things like, “it’s not me, it’s the Fed,” as Fed policies were pressuring the stock market. While the stock market is never black and while, I do think the December 19, 2018 Fed rate hike was completely unnecessary and the Fed’s quantitative tightening policy pressured the stock market. The other issue that pressured stocks a year ago was the trade skirmish with the Chinese – a nearly two-year-long “trade war” that may bring a partial resolution this week.

When it comes to the Fed, whatever it was doing wrong last year, it is now doing completely the opposite. We saw multiple Fed funds rate cuts in 2019, but more importantly the rate of growth of the previously shrinking Federal Reserve balance sheet is on target to take it to more fresh all-time highs in 2020, if it stays at the announced $60 billion monthly rate. Such reversal of monetary policy can be dubbed “QE4.”

Why we need QE4 when unemployment is as low as it was in 1969 (3.5%) is a deeper philosophical question that will need economic developments in 2020 to help us answer. Expanding the Fed balance sheet in an election year is a reversal of the previous monetary tightening and could be viewed as a political maneuver that would help a certain election outcome, no matter what the Fed chairman says.

As to the trade skirmish with the Chinese, President Trump was 100% right to challenge China, as they have been abusing that bilateral trade relationship for years. I think if there is a Phase I deal, it would be the result of a clever Chinese negotiating technique to drag the trade talks into the U.S. election cycle to get a half-baked deal. Mr. Trump already said last week that he is not interested in half-baked deal and he would be willing to drag this trade negotiation until after the U.S. presidential election. In that regard, Mr. Trump responded to the Chinese with the same brinkmanship and “game of chicken” that they employed when they reneged on key negotiating points in May 2019, triggering more U.S. tariffs.

I think the market would celebrate a trade deal that avoids the December 15 tariff hikes – and the markets will not be happy if the trade war intensifies. I think Mr. Trump misjudged as to how much economic pain the Chinese were willing to take in order to get to this juncture of a possible Phase I deal.

Still, the pessimist in me would view a Phase I deal as a short-term stock market positive with the expectation that 20 years of intellectual property theft by the Chinese and targeted trade deficits with their orchestrated army of state buyers would be hard habits to quit, more difficult than a two-pack-a-day chain smoker quitting cold turkey. But that would be a worry for 2021, if a Phase I deal is actually signed.