At the end of last week, we had a situation where bonds, stocks and the dollar all went up, which, based on recent economic developments, is rather counterintuitive. While some stock benchmarks registered extreme relative strength index (RSI) readings – at the highest level for 2021 – the Treasury market is more interesting to me, as I was not looking for such a violent countertrend rally, given that the Fed will notably decrease the rate of its bond purchases by $15 billion this month and proceed to reduce purchases at that rate until June 2022, unless the economic situation requires it to shift its policy.

I know that there has been massive institutional short selling of Treasury futures, as the exchanges report that data. In two weeks, we made a violent move from 1.70% to 1.45% (and 1.435% intraday). This is either a technical short squeeze, where too many traders were leaning one way and the market reversed and caused the leverage to unwind, or this could be a violent short squeeze driven by changes in the economic outlook, indicating that something may be wrong with the U.S. (or global) economy.

I think it’s the former, as I believe the U.S. economy is normalizing, which should lead to further gains in employment and GDP. There are signs that the COVID pandemic is re-emerging in China, which could have implications for global growth, given that it is the second largest economy in the world, but Pfizer’s news last week that it has developed a pill that successfully cuts hospitalization and death risk by 90% should mean that the end of the tunnel for this pandemic is near. I don’t believe COVID will disappear. It will most likely keep coming back, requiring regular vaccine boosters and treatments from Big Pharma. 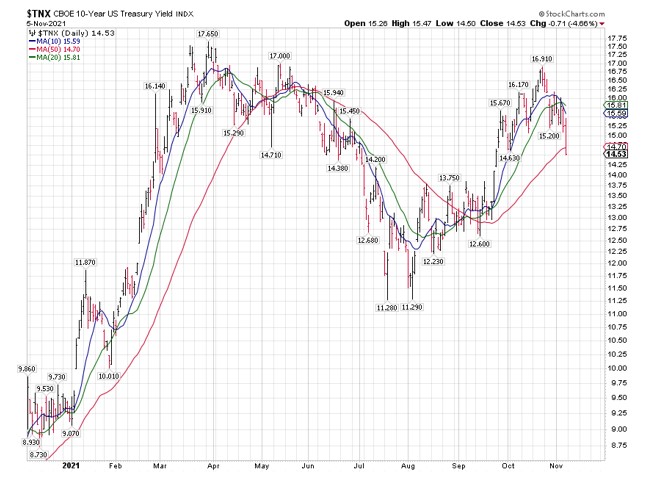 If this is just a technical short squeeze and the fundamental outlook for Treasury yields points higher, we should not see any further drops in the 10-year rates. The number 1.45% is now a big line in the sand, as it also coincides with a rising 50-day moving average. The first touch of a rising 50-day moving average after two months trading above it should serve as pretty good support for 10-year yields. If we see strong rebounding rates this week, then this was just a technical short squeeze. If the 10-year trades below 1.45% and stays there, there is something the Treasury market is sensing in the economy that it does not like.

The Dollar Should Move Much Higher

The Broad Dollar Index is weighted towards trade flow and includes the major currencies in emerging markets. It correlates with the euro, which is the largest component of the old U.S. Dollar Index (DXY). 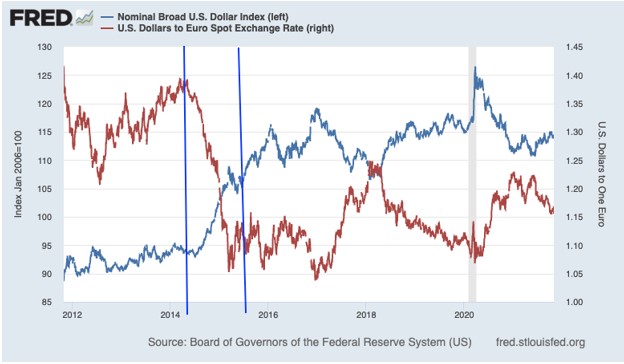 The last time we had a tapering, in 2014, the Broad Dollar Index moved violently higher and the euro violently lower. I don’t know if it will be as violent this time around as QE was done on a large scale in both the eurozone and the U.S. in the COVID recession, while a decade ago the Europeans were much later to the game and were slow to implement such unorthodox monetary policy practices.

One could say that back then the Fed and ECB policies were much more divergent than they are today.

Whatever the case, the intermediate term outlook for the U.S. dollar now is up, which is only going to get stronger if we see the 10-year Treasury yield trade above 1.75%.