Perhaps investors wanted to read into this paragraph from the latest FOMC statement more than it said:

“The Committee anticipates that ongoing increases in the target range will be appropriate in order to attain a stance of monetary policy that is sufficiently restrictive to return inflation to 2 percent over time. In determining the pace of future increases in the target range, the Committee will take into account the cumulative tightening of monetary policy, the lags with which monetary policy affects economic activity and inflation, and economic and financial developments.”

Yes, we know there are lags; and yes, we know they have raised rates very fast. Still, Powell completely walked back this paragraph in the presser, saying it was too premature to talk about a pause. As a result, Fed funds markets are beginning to price in a 5% Fed funds rate, which I think will be absolute overkill. Going from zero to 5% in 12 months or so is lunacy, as the other rate hikes have not been absorbed yet.

Powell pointed out that the yield curve is not inverted yet if you look at the 3 month/10-year Treasury spread. This is technically true, but I think the Fed is literally “curve-fitting” this statement, as it is choosing the one spread that is not inverted, while many others are severely inverted.

The 2-10 spread is more inverted than any of the most recent (Greenspan or Bernanke) inversions, but it has not gotten as bad as the Volcker inversions, which were horrific. Inverted yield curves not only indicate but also cause recessions as they signify how the Fed is restricting the flow of credit. Right now, what Powell is doing is more severe than anything Bernanke or Greenspan did (from 1987 to 2014).

The Fed is supposed to play a countercyclical role, smoothing out volatility in economic performance, but Powell’s Fed has overstimulated to the upside and overtightened to the downside. Instead of smoothing things, he increases volatility in both directions, which is completely unnecessary, as I have said before. 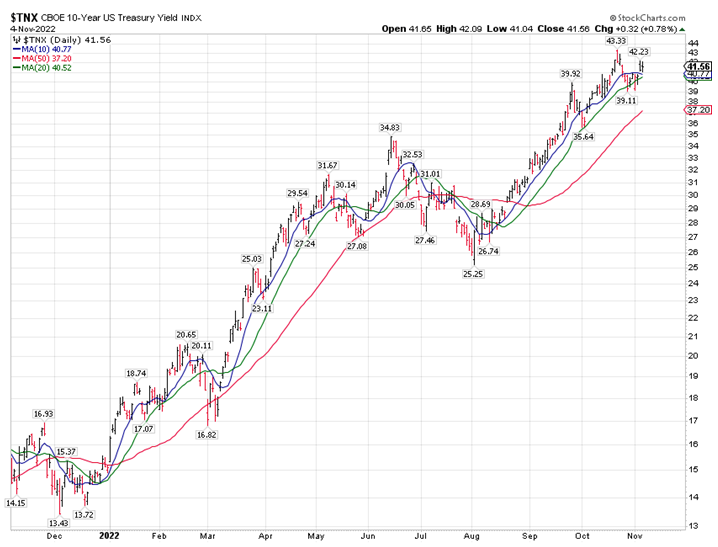 After seeing the 10-year triple in yield in less than 11 months, it looks like Powell wants the 10-year at 4.50% or higher by the next FOMC meeting (December 14) so that his preferred measure of yield curve inversion (to the 3-month rate) won’t turn negative, while other measures of yield curve inversion will go further into negative territory. Keep in mind that sell-offs in Treasury futures have been correlated with sell-offs in S&P futures on most trading days of late. We also have positive seasonality after the election, combined with expectation of higher rates, which can be pretty messy between now and the end of 2022.

There is a sharp sell-off in the yuan and acceleration in the flight of capital out of China, all of which is threatening to break their $3 trillion forex line in the sand. Could the COVID lockdowns pop the Chinese real estate bubble and their even-bigger credit bubble in the entire Chinese financial system?

Everybody is their own worst enemy, and Xi Jinping’s lust for power may be what pops the twin debt bubbles in China. If they pop, the resulting deflation will make the present inflation look like a pleasant alternative. The trouble is that it is impossible to forecast China’s financial system with any accuracy, as it is very different than ours, and it is controlled by the Chinese government, which keeps adding lending quotas. In that regard, they re-inflate credit bubbles, kicking the deleveraging can down the road.

When Chinese families stopped paying mortgages recently, Chinese authorities sent in tanks and the army. That did not happen in the U.S. in 2007-2008. Some kind of unraveling is coming in China, we just have no idea if it will happen in 2023 or 2024, but it is near, in my opinion. That would be a perfect time to invade Taiwan, as it would distract global political opinion from any unfolding economic mess.

Sector Spotlight by Jason Bodner
Is Carefree Investing Possible in This “Age of Anxiety”?