If you’re looking for something to give thanks for this Thanksgiving week, look at the 2010-19 decade in stocks. As of Monday, this decade is 99% in the books and the Dow is up over 167% through last Friday. That places it firmly in 4th place in the 12 full decades since the Dow was born in the late 1890s. That’s especially refreshing since the 2000-09 decade was the second worst, trailing only the Depressing 1930s.

Here’s a list of how the other decades have fared, courtesy of my friend Ed Elfenbein at CWS: 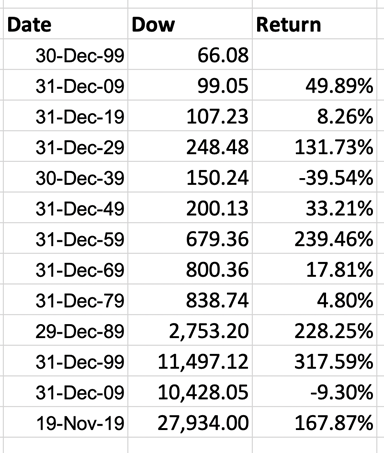 Alas, this is still the most un-loved bull market in history. A recent survey by UBS, a Swiss investment bank, of 3,400 investors with at least $1 million in investable assets, found that more than half of them think there will be a significant market sell-off by the end of 2020. The survey showed that they have moved to an average 25% cash position in a world that pays near-zero interest on cash. Two-thirds (66%) of those surveyed believe the market will be driven more by the negative external headlines (geopolitics) than internal market fundamentals, even though corporate earnings are set to take off in 2020 and 2021.

Through all the good, bad and ugly headlines of the last century, the Dow has grown over 260-fold, from 107.23 on December 31, 1919 to around 28,000 now. And that’s just a small microcosm of the wealth created by what Nobel Prize-winning economist Angus Deaton calls “The Great Escape” (from poverty) or economist Deirdre McCloskey calls “The Great Enrichment” or Jonah Goldberg calls “The Miracle.”

In his 2018 book, “Suicide of the West,” Goldberg said that one theme of his book is “ingratitude for the Miracle. Our schools and universities, to the extent they teach the Western tradition at all, do so from a perspective of resentful hostility toward our accomplishments…. If we don’t teach people to hold what they have precious, they simply won’t bother defending it against those who think what we have is evil.”

You’ve got to accentuate the positive, eliminate the negative,
Latch on to the affirmative, and don’t mess with Mr. In-Between.
You got to spread joy up to the maximum, bring gloom down to the minimum
And have faith, or pandemonium is liable to walk upon the scene.

On Thanksgiving Day, 75 years ago, Marines were still dying on obscure islands in the Pacific, and Germany was about to stage its last gasp attack in the Ardennes Forest in the Battle of the Bulge. The Dow was still below 150, more than 60% off its 1929 peak, but Johnny Mercer wrote this inspiring song.

Prosperity was just around the corner in America – but not in Britain, where they threw out their wartime consigliere Winston Churchill in preference of the Labour Party and their welfare state under Clement Atlee. Ironically, our vanquished foes fared much better, as Chancellor Konrad Adenauer and his enlightened finance minister Ludwig Erhard revived the German economy, with the help of our Berlin airlift. Japan’s economy was also supercharged by U.S. business executives sharing their expertise.

America remains the #1 destination for Dreamers. In over a decade of columns here, I have tried to show how America’s special economic advantage has been freeing entrepreneurs to start businesses, the true “American Dream.” At times, I have tried to prove the advantage of the American economic system through the aid of statistical studies. Last week, I showed how the top 20% is not that far above the bottom 20% in income differential if you account for taxes taken from the top 20% and distributed to the bottom 20%. I have also shown how millions migrate from the bottom 20% to the top 20% as they age and grow in experience, and others rise and fall from the top to the bottom and back as they take risks.

But still, huge wealth gaps remain – and here’s the best cure: Let’s remove the barriers of entry to the poor who want to become business owners. Government regulations have erected steep barriers to block poor or middle-class aspirants from achieving their dreams – like 1,500 hours of training to receive a license to braid hair. Why not let customers decide who knows how to braid hair, or manicure nails? 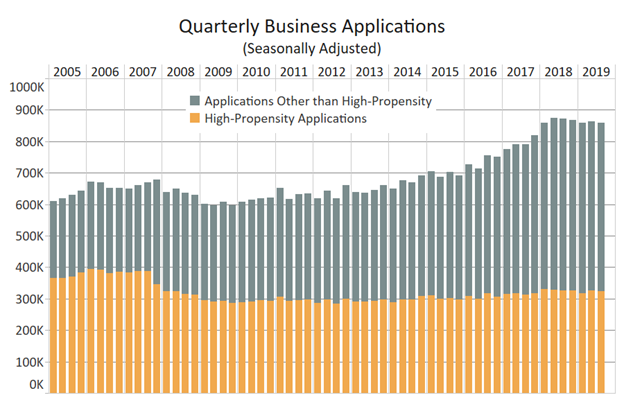