The Brazilian real – or reais as the locals call it – closed on Friday at 4.1962, which can be rounded up to 4.2 on the USDBRL cross. This is disconcerting news to those that know that the all-time low in the reais is 4.25, which is a stone’s throw away, given that we have already traded above 4.22 in the past week.

The Federal Reserve is now unwinding its monetary tightening cycle at a pretty brisk pace, which was a very big problem for most Latin American currencies, yet the dollar is firm and the reais is very weak. 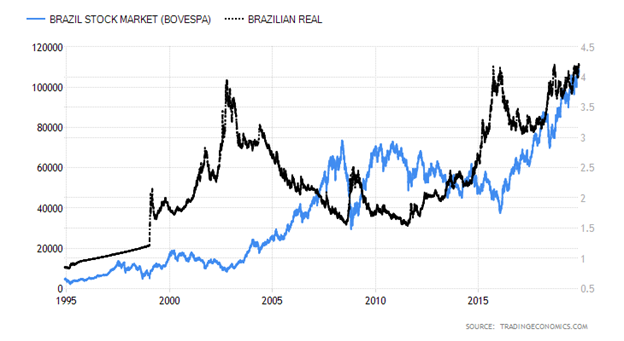 On paper, the Brazilian stock market is at an all-time high, probably catalyzed by the election of pro-business President Jair Bolsonaro. In reality, the Brazillian reais is down so much that this all-time high is not so meaningful. Bolsonaro’s arch-nemesis, former President Lula da Silva, was recently released from prison after Brazil’s Supreme Court ended a law that ordered mandatory imprisonment after the loss of a first appeal, which is what sent Lula to jail and prevented him from challenging Bolsonaro in 2018.

With Lula vowing to make life miserable for Bolsonaro, I am beginning to see some uneasy parallels with Argentina, where reform-oriented former President Mauricio Macri began to overhaul the economy and government bureaucracy, but just as his reforms began to bite the average person, the populist duo of President-elect Alberto Fernandez and VP-elect Cristina Fernandez de Kirchner seized the moment and the Argentines voted Macri out of office. Could Lula similarly seize the moment in Brazil?

In Brazil, there is a two consecutive term limit for President, but not for life, similar to the rules in the Russian Federation. Technically, Lula can run for president again. Bolsonaro has already cancelled some planned reforms to overhaul the government bureaucracy, seeing what went on in Chile and other Latin American countries, which is precisely the type of discontent that charismatic leaders like Lula thrive on.

In late 2002, I personally saw Lula speak at the National Press Club in Washington DC after he had won his first election but before he had taken office. There was a horrendous sell-off in both the Brazilian stock market and government bonds as investors feared that a leftist president would undo the successes of prior reform-driven administrations. Asked to explain the close relations between his Workers Party and the Communist Party of China, he smiled and successfully neutralized the loaded question: “If having close relations with China is good for the U.S., I figured it would be good for Brazil,” he answered.

In reality, Lula turned out to be a two-term President who always campaigned from the left but successfully governed from the middle. He did not run in the 2018 presidential election due to his legal problems. (The judge who sent him to jail is Bolsonaro’s current Justice minister). Lula would be 77 by the time the next election comes around and, if he is in good health, I think he will run again.

China is a Major Factor for Brazil

Brazil’s issues are not entirely rooted in domestic policies. If Lula wins again, I think he will rule as the kind of pragmatist he was in his first two terms in office. But the price level of commodity indexes is a major factor for Brazil’s economy, and there the major driver is China. 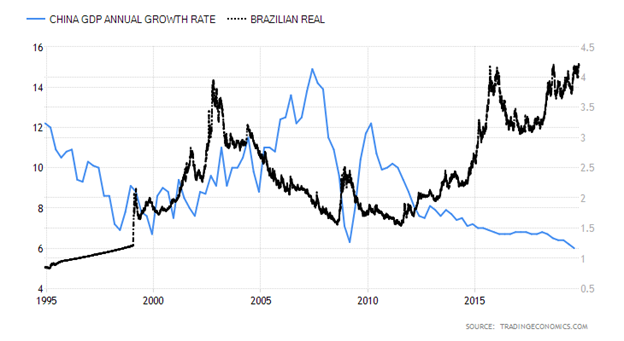 As the Chinese economy has slowed down, the level of most commodity prices has declined and so has the Brazilian real. Because the Brazilian real is quoted on an inverted scale, more real per dollar means a weaker real. The sensitivity of the local currency to the Chinese economy can also be seen in another country where the economy is disproportionately driven by exports to China – like Australia. 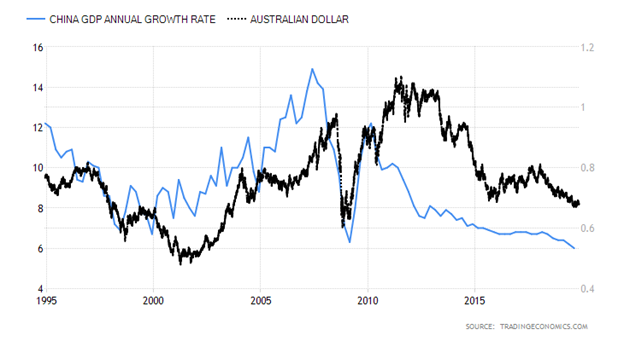 I think the Australian dollar will ultimately end up at 50 cents and the Brazilian real will trade above five to the U.S. dollar whenever that Chinese hard economic landing, which has been five years in the making, finally arrives. But unfortunately, it is impossible to pinpoint with precision when that will finally happen.

The Chinese believe they can eliminate the natural economic cycle. They think that because the Chinese government controls the banking system – since they own all the major banks in the country – they can inject new loan quotas every time the economy weakens, and in such a way prevent a normal contraction and the recessions that are typical for Western economies, where the central banks do not tell privately-held banks what their loan quotas are. They also hold the capital controls and a grip on the exchange rate.

I do not believe that any such elimination of the economic cycle is possible, even by the capable comrades in Beijing, and that such loan quota injections that go to nefarious “bridges to nowhere” will make the hard landing worse when it arrives due to their horrendous misallocation of capital.

Never in the history of capitalism has there ever been a situation of so much government control over the financial system. For the time being, however, we have to let them enjoy the illusion that they can rewrite the laws of economics by decree of the Politburo Standing Committee of the Communist Party of China.