11-24-20: What to Expect this Holiday Season in Retail Sales 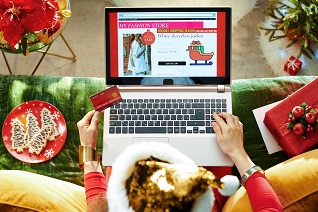 As consumers become more isolated due to rising Covid-19 cases, some concerns are brewing about the upcoming holiday sales season, which will become more evident after Black Friday, when the holiday shopping season traditionally begins. However, one trend is clear, namely that the big box retailers are prospering from their rising online divisions. Furthermore, Amazon.com is expanding into the pharmacy business to further its online dominance. Even after the vaccines are distributed to fight Covid-19, the way consumers shop has likely been permanently altered. Moving forward, I expect that Amazon.com, Target, and Wal-Mart combined, will dominate approximately 70% of online orders.

Take a look at the latest retail sales monthly report for more clues. Last week, the Commerce Department announced that October retail sales rose only 0.25% (month over month), well below the economists’ consensus estimate of a 0.5% increase. The good news is this was the sixth straight monthly increase, but the bad news is that only five of the 13 sectors surveyed show any improvement. October’s leaders, as expected, were online sales, which surged 3.11% last month, accounting for most of the gains, and electronics & appliances, which rose 1.19%, due primarily to the announcement of the iPhone 12.

September’s retail sales fared much better, but they were revised down to a 1.6% increase, down from 1.9% increase previously reported. Still, +1.6% is great when measured month over month. Overall, it appears that consumers started to “nest” more as Covid-19 restrictions spread in major cities and some states. Fortunately, we have a lot of stocks benefiting from “stay at home” and “work at home” trends.

If you ignore the month-over-month volatility and look at the 12-month gains, the last two months look far more positive. September and October are each up over 5% from the same two months in 2019:

However, due to the housing boom, U.S. households added $1.05 trillion in new mortgage originations, so they increased their overall mortgage debt by 9.4% (or $85 billion) to a total of $9.86 trillion during the third quarter. This means U.S. household debt increased in the third quarter by 6.1% or $87 billion, but a mortgage debt – unlike credit card debt – represents a home, a major asset on the other side of the ledger. I should add that home equity loan balances have been declining since the fourth quarter of 2016.

The Other Housing Statistics Are Very Bullish

September’s housing starts were revised up to an annual rate of 1,459,000, up from 1,415,000 previously reported. October housing starts rose in the West, Midwest, and South, but declined in the Northeast. In the past 12 months, housing starts have risen by a very healthy 14.2%, indicative of a V-shaped recovery.

The best news last week was that the National Association of Realtors reported on Friday that existing home sales hit a 14-year high in October as sales rose 4.3% to an annual pace of 6.85 million. In the past 12 months, existing home sales have risen 26.6%. There were only 1.42 million homes for sale at the end of October, which represents a tight 2.5-month inventory, so home prices should continue to rise.

Many people are “nesting” and spending more time at home. Even after Covid-19 vaccines are distributed and pandemic concerns dissipate in the upcoming months, housing sales should remain strong, since the “work at home” trend will persist for years to come, because many workers are more productive at home.

Turning to the job market, the worst news last week was that the Labor Department announced that unemployment claims rose 31,000 in the latest week to 742,000, substantially higher than the economists’ consensus estimate of 707,000. This is the first increase in weekly unemployment claims in the past five weeks and indicative that new Covid-19 restrictions are likely curtailing new job growth. The good news was that continuing unemployment claims declined 429,000 to 6.372 million.

Continuing claims for Pandemic Emergency Assistance, which covers self-employed and independent contractors, rose 751,000 to 8.68 million in the latest week, which is further indicative that as cities and states restrict their economies due to Covid-19, the economic toll is mounting. Since unemployment insurance and special pandemic relief is due to expire at the end of the year, approximately 12 million people stand to lose their benefits unless Congress extends the current relief benefits.

Sector Spotlight by Jason Bodner
What is Your Favorite Stock, and Why?