The Wall Street Journal posted a great article last week entitled “U.S. Government Is Tripping Over Itself in Race to Dominate 5G Technology.”  Essentially, the speed of 5G networks depends on the radio spectrum licensed by the Federal Communications Commission (FCC).  You are probably familiar with the 2.4 and 5 GHz licensed to wi-fi networks that send signals over “long waves” that can penetrate walls and glass.  However, the really fast networks, like 5G, require “shorter waves” that need “repeaters” everywhere, since they cannot as easily penetrate walls and glass.  The desired 24 GHz network for 5G providers is receiving objections from the Commerce Department, NASA and NOAA over fear of weather satellite interference.  Furthermore, the wi-fi industry is now lobbying for faster and additional radio spectrums to speed up the next generation of wi-fi devices.  Complicating matters further, utilities and the Defense Department have their own radio spectrums licensed by the FCC. 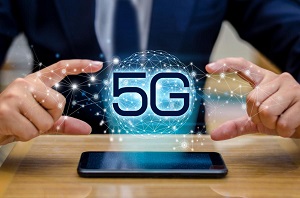 In the U.S., satellite networks are utilizing the shorter-wave radio spectrum to broadcast television signals and are obsessed with fast speed due to 4K programing.  So do not get upset when you read in the future that 5G is faster in Asia than in the U.S.  All those devices in your home that increasingly require faster wi-fi as well as your 4K television are fighting with the FCC for more space on the radio spectrum.  Naturally, the FCC will grant new licenses that will force you to continue to perpetually upgrade more devices in your home in the upcoming years that require faster wi-fi and 5G access.

Fed Chairman Jerome Powell told Congress last week that he was comfortable with current Fed policy.  Specifically, Powell said, “We see the current stance of monetary policy as likely to remain appropriate as long as incoming information about the economy remains broadly consistent with our outlook of moderate economic growth [and] a strong labor market.”  Powell added that, “Of course, if developments emerge that cause a material reassessment of our outlook, we would respond accordingly.”  I should add that Wall Street typically likes stability, so now that the Fed appears done on cutting key interest rates, it could help the stock market better focus on the future, since there is now less uncertainty.

In contrast, President Trump in a speech before the Economic Club of New York last Tuesday took the opportunity to bash the Fed once again, claiming that the stock market would be significantly higher if it were not for the Fed.  Despite the fact that market rates have risen in the past few months as worldwide economic growth has stabilized, President Trump said that the Fed should continue to cut key interest rates to make the U.S. more competitive in global markets.  President Trump noted that the S&P 500, Dow Industrials and NASDAQ composite are up 45%, 50% and 60%, respectively, since his election and then proclaimed that “if we had a Federal Reserve that worked with us, you could have added another 25% to each of those numbers, I guarantee you that.”  I think it is safe to say that President Trump will continue to try to talk up the U.S. economy and the stock market heading into the 2020 election.

The economic indicators back-up Chairman Powell – that more rate cuts may not be needed. Inflation is tame enough. On Wednesday, the Labor Department announced that the Consumer Price Index (CPI) rose 0.4% but it is only up 1.8% in the last 12 months. Retail gasoline prices soared 3.7% in October but have fallen 7% in the past 12 months.  Excluding food and energy, the core CPI rose only 0.2% in October.

On Thursday, the Labor Department announced that the Producer Price Index (PPI) in October surged a similar 0.4% but is up only 1.1% in the past 12 months. Once again, the one-month rise was largely due to a 7.3% surge in wholesale gasoline prices.  Excluding food and energy, the core PPI was unchanged.

The best news on the inflation front was that the Labor Department reported that its import price index declined 0.5% in October.  Excluding petroleum and food, core import prices declined 0.1%.  In the past 12 months, import prices have declined an astounding 3%, the largest annual decrease since 2016, as a strong U.S. dollar continues to push down import prices and squelch domestic inflation.  This tells us that the financial media’s prediction that the President’s tariffs would boost the prices of imported good, such as electronic items, is clearly incorrect due largely to a weak Chinese yuan and a strong U.S. dollar.

By contrast, China’s National Bureau of Statistics recently announced that its consumer price index soared at a 3.8% annual rate in October.  Soaring pork prices caused food prices to rise at their highest level in 11 years.  Unfortunately, the deadly African swine fever that is killing pigs may drive China’s CPI to over a 4% annual rate in the upcoming months.  The demand for other meats and eggs are also rising as Chinese consumers look for alternatives to pork.  A weak Chinese yuan is also an inflation catalyst, since it causes the prices of imported goods to rise, but for now food inflation is dominating the headlines.  As a result, China needs to import more pork from the U.S. to squelch its domestic inflation.